News
Business
Movies
Sports
Cricket
Get Ahead
Money Tips
Shopping
Sign in  |  Create a Rediffmail account
Rediff.com  » Movies » Superheroes, all over the place

Superheroes, all over the place 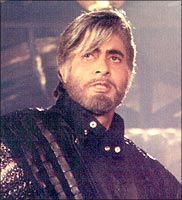 1987 saw two Bollywood superhero excursions, and they could not have been more different. On one hand, we had B Gupta's incredible version of Superman, starring Puneet Issar as Superman and Dharmendra as his father. The result was a painful movie with dismal effects -- the only tolerable scenes being footage blatantly borrowed from Richard Donner's 1978 original -- and a horrifying script. Shakti Kapoor is the villain Verma, while Preeti Ganguly features as 'Mrs Muscle Woman from Zambia.' Yes, indeed. This is one of those awful productions that has -- just by dint of being so, so bad -- spawned its own cult following online. Find it, if you dare.

But, with poetic justice, that year also gave us the best. Shekhar Kapur, at the height of his visionary powers, pulled off the superb Mr India, a tale that overwhelmingly balanced commercial cliché with a truly comicbook heart. Anil Kapoor played Arun, a scraggly big-brother figure to a dozen orphans. Faced with utter destitution, he found his father's legacy, a bracelet with the power of invisibility. Armed thus, he stood up to magnificently campy Mogambo's (Amrish Puri, who else?) plans of world domination -- while falling in love (Superman homage, anyone?) with fiery journalist Sridevi. The film was a smash hit, and remains one of the most watchable of that decade, a groundbreaking piece of work with the power to create a new Bollywood genre.

The problem, however, lay in originality. Having turned Kapur down for Mr India, Amitabh Bachchan -- he reportedly wasn't interested in being invisible for half the movie -- decided to embark upon the superhero path. In 1988, his friend Tinnu Anand directed Shahenshah, a film with story credits pointing accusingly to wife Jaya Bachchan. The movie starred Amitabh as a cop by day and vigilante by night, wearing a white wig and jacket with chain-mail arm. Amrish Puri, the definitive baddie of the era, played scotch-swilling JK, and Meenakshi Sheshadri pouted for the endless songs. Weighing in at over three hours, the hackneyed-yet-hatke film was a crucial hit for Bachchan, his first since 1985's Mard.

Deciding that the superhero image change gave him popularity with a brand-new demographic, Bachchan went for another one the very next year, as Manmohan Desai's son Ketan directed him in Toofan. The double role featured AB as a jolly magician called Shyam and the crossbow-carrying

crimefighter, Toofan. A harmless cornball comedy, this was constantly aimed at kids -- who didn't really love it. The film was a commercial disaster, Meenakshi Seshadri not proving lucky this time around, and Goga Kapoor clearly not menacing enough to fit into Mr Puri's sinister shoes.

Since then, we've had a lull in terms of the superhero concept. Sure, Amitabh tried his hand at unwatchable fantasies like Jaadugar and Ajooba, but they wouldn't really qualify as superhero movies. Still, it did take a star of Bachchan's calibre to bring the genre to the mainstream -- it is difficult to imagine who else could have carried off a ridiculous costume, dialogues spoken with extremely deep breaths, and a bright orange cape save for India's biggest superstar. Many years later, Shah Rukh Khan took a half-hearted stab at the genre with the spoofy Badshah, but this too was a commercial failure.

We haven't really ever gone all-out superhero. Arun Bhaiyya had a nifty invisible bracelet, and that brought him closest. Bachchan had outlandish costumes, but no abilities that really made him super. A friend mentioned a Rajnikanth movie where he could fly 10 metres and find cops, but we couldn't really come up with the name. In more recent times, films like Hindustani and Aparichit have dealt with vigilantes who pull-off some pretty interesting stunts, but aren't officially gifted with anything special.

As said, when our heroes are death-defying and near-omnipotent to begin with, how much larger than life can we get? But things are changing. Cinema is getting grittier and relatively heading into realistic territory (in terms of plot and character; credible dialogue writing is still rarer than an Aishwarya Rai hit) and it now seems we might actually be able to bring out our superheroes.

This month, even as we await the return of the most popular superhero of all, the genre seems back. Ashu Trikha's Alag stars a hairless protagonist (eyebrows included) who is an outcast from society. From the promos, one can optimistically consider a mutant story developing. Rakesh Roshan's Krrish stars the son of an alien with a tendency to play out scenes from Hollywood's biggest grossers. Neither is a great director; neither film currently shows much promise. But they are undeniably moving in the cape-and-batcave direction, and so we must watch them. And hope.