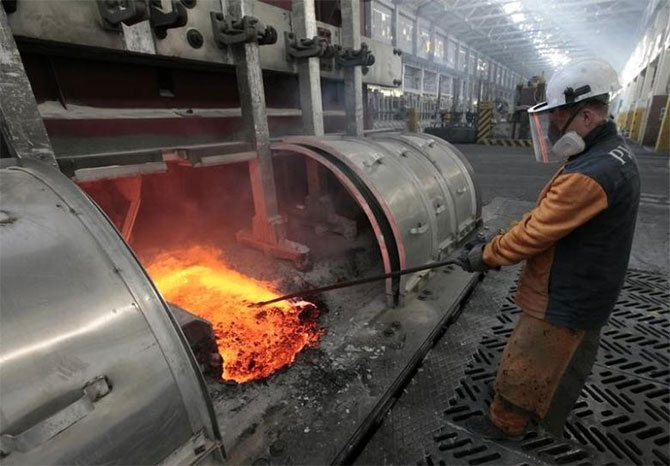 It is going to be tough for domestic steel companies to maintain their toplines in coming quarters. With local demand for the industrial commodity not picking up on expected lines and government protection measures to phase out soon, primary producers could come under pressure to cut product prices going ahead.

"If local demand continues to remain sluggish post March, then it is going to be a big problem for the steel producers," Nitin Johari, chief financial officer at Bhushan Steel told Business Standard.

"At present, steel demand is subdued but we need to wait-and-watch as the market sense is that traders will de-stock their material by March and pick up fresh stocks April onwards," he added.

Early this month, the government extended by two months (until early-April) the anti-dumping duty on certain cold-rolled flat steel products from four countries including China and South Korea to guard domestic industry against cheap imports.

It also pulled out the last 19 steel products from the purview of WTO non-compatible minimum import price (MIP), initially imposed on 173 products in February 2016.

Some traders said demonestisation has also played a role in dampening steel demand mainly in the retail segment.

"Overall steel demand is extremely weak. There is major cash flow problem even today. Funds are not being sanctioned as some states are busy with assembly elections and are under model code of conduct," said a Mumbai-based trader close to the development on condition of anonymity.

Since imposition of MIP in February 2016, producers have raised steel product prices nearly 70 per cent which in turn has translated into better realisations.

In January, domestic steel prices rose to the highest in last five years to Rs 39,750 per tonne from the lowest of Rs 25,250 per tonne in January last year, before imposition of MIP.

Going ahead, however, whether producers will be able to raise prices in same strength needs to be watched.

"Producers can come under tremendous pressure to lower prices in coming months that is if demand remains the way it is. This would be worse for the industry as consumers may then delay their purchases further in anticipation of deeper cuts," said the Mumbai-based trader.

Weaker domestic demand has led to increased exports of steel to the extent that India is emerging as net exporter of the commodity.

"India has already emerged as a net exporter. Indian exports has risen by 73 per cent in Apr-Jan period. We expect this momentum to continue in the coming quarters," said Vikram Amin, executive director (strategy & business development) at Essar Steel.

As per the Joint Plant Committee data, steel exports during Apr-Nov have jumped significantly on year-on-year basis, while imports have almost halved. Consumption, however, remains quite stagnant. (see chart) 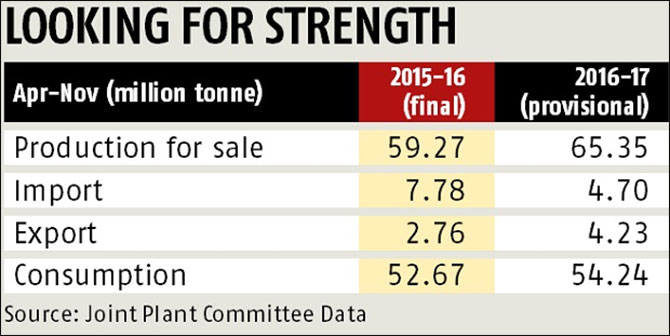 Of course, there has been impact on certain sectors like retail, construction and part of consumer durables. But, demand in auto, yellow goods, infra and road development is still intact and picking up. Demand from export market has been strong.

Hence Indian steel exports have risen significantly thus bringing in stability to the domestic market. So long as there is no threat from dumping, the demand supply situation is well balanced," explained Amin of Essar Steel.

In the coming year, however, industry expects consumption to pick up significantly.

In 2017-18 (Apr-Mar), steel production is expected to remain higher and will be backed by an expected revival in consumption, said Care Ratings in its recent report.

An increase in infrastructure allocation by the government in the Union Budget 2017-18 is expected to drive the pace of construction and infrastructure in the country, it said.

Apart from this, the National Steel Policy 2017 released by the government also aims to increase steel production. Thus, both production and consumption of steel is expected to remain buoyant in 2017-18, explained the report.

"We are bullish on domestic steel market, The various initiatives taken by government in the last couple of years have started yielding positive results and it's only fair to expect that the steel demand will grow in the coming months.

We expect the demands will come from infra, roads, railways, defence, power. The union budget outlays for these sectors are significant which can drive steel demand solidly," said Essar Steel's Amin.

Domestic steel production is expected to remain higher in coming months as Tata Steel's Kalinganagar and JSW Steel's Karnataka plant are to bring in additional capacities to the market.