We'd asked you, dear readers, to tell us what your first salary was and what it meant to you at the time.
Rediff reader Godwin GS Rao shares his story. What used to be a glorious and comfortable ride when dad was alive, turned into a stark nightmare after his death.

My mother who hadn't completed her education was dependent on dad's pension to run the family and take care of nine kids, including five young children.

Two of my elder sisters, who were still in school, started tutoring small kids to support our mother financially.

I was helpless that I could not support them in this battle for survival.

My sisters who were busy requested if I could take up the offer. I instantly jumped at the idea.

The first month ended in a tumultuous manner. The child turned out to be a spoilt brat who wouldn't even listen to his parents, and had a slight fear for me.

I handed over the amount to my mother who refused to accept it.

She made me keep it in front of our family deity.

I was thrilled to be able to support my sisters and mother.

I went on to be ranked among the top four private tutors in Mumbai.

A few years later, a handsome young man came to me, bowed down and touched my feet.

Initially, I did not recognise him. But when I came to know that the boy had cleared his engineering degree with flying colours, I recognised him gradually. He was the first student I had tutored.

I couldn't hold back my tears when he told me how my own battle in life had set an example for him and helped him in mending his ways.

It was a proud moment for both of us. 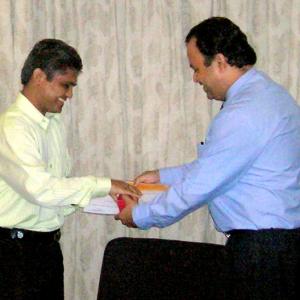