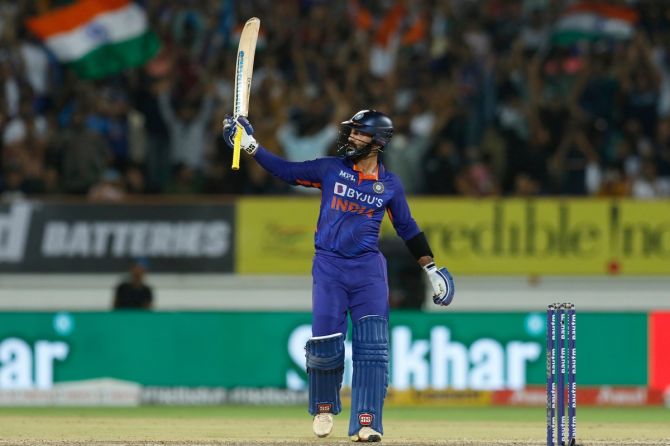 Dinesh Karthik as an 'enforcer' opens up a lot of options going into the T20 World Cup, says India head coach Rahul Dravid, who wants to identify a core group of 18-20 players by the end of England series.

For Dravid, to be a part of the World T20 set-up, it won't be enough to just the "knock the door". Anyone who wants to stake a claim in that squad of 15 will need to 'bang it down'.

"It was really nice to see Karthik come off and do what he has been picked to do. That was good and it opens up a lot more options for us, going forward," Dravid said after the five-match series against South Africa ended in a 2-2 draw.

The last game was abandoned due to rain.

"He was picked for what he has been doing exceptionally well for the last two or three years (in IPL) and kind of indicated in the sense that it almost came together in the game at Rajkot," Dravid spoke about the Tamil Nadu dasher's 27-ball-55 that was crucial in India restoring parity in the series.

For Dravid, Karthik and Hardik Pandya are the two 'enforcers' in the death overs.

"We needed that big performance in last five overs to make a par score and he and Hardik batted beautifully. Both of them are enforcers for us at the end," Dravid spelt out what role the team management has in mind for Karthik.

Want to get hang of core as quickly as possible

Dravid doesn't want to put a time line but by the end of the England T20Is, he wants to have a fair idea about the 18 to 20-odd players he would be looking at ahead of World Cup in Australia.

India and England will clash in six white-ball games (July 7-17) after one-off Test.

"As you come closer and closer to the event, you want to firm up your final squad or if not, obviously you want to have some contingencies in the kind of world we live in today. Obviously you want to take only 15 to the WC but (need to identify) top 18 to 20 players," he replied to a query on where he stands on his core team.

"Obviously, there could be odd changes due to injury and things that are beyond your control but we are going to start looking to firm up that squad as quickly as possible.

"Whether that will happen in next series (Ireland) or series after that (England) is hard to tell but we are certainly looking to do that as quickly as possible," he revealed. 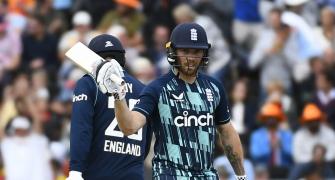 No fireworks this time as England beat Netherlands 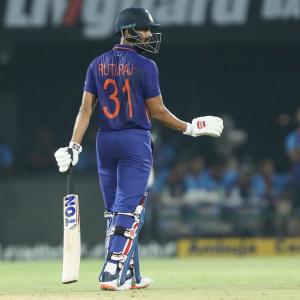 Why Is Gaikwad Being Trolled? 'Pant is overweight and bulky'