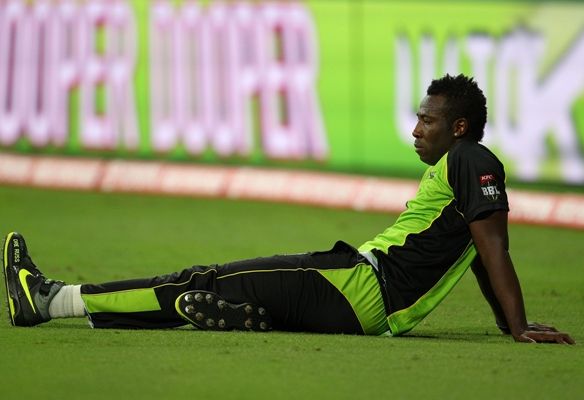 IMAGE: Jamaica's anti-doping commission (JADCO) has appealed to have Russell's suspension doubled from one year to two. Photograph: Getty Images

West Indies all-rounder Andre Russell has appealed to have his one-year ban for a doping whereabouts rule violation dismissed.

Russell, a two-time Twenty20 World Cup winner, was revealed to have committed the violation a year ago after registering three filing failures in 2015. That constituted a failed drugs test under World Anti-Doping Agency (WADA) rules.

Reuters has obtained a copy of Russell's appeal document that was submitted to the Jamaican Anti-Doping Appeals Tribunal on March 20. It calls for “the decision rendered by the independent anti-doping disciplinary panel be set aside”.

Jamaica's anti-doping commission (JADCO) has appealed to have Russell's suspension doubled from one year to two.

In a second filing, Russell called for this appeal to be dismissed on the grounds that there is no basis for his suspension to be extended.

© Copyright 2021 Reuters Limited. All rights reserved. Republication or redistribution of Reuters content, including by framing or similar means, is expressly prohibited without the prior written consent of Reuters. Reuters shall not be liable for any errors or delays in the content, or for any actions taken in reliance thereon.
Related News: Andre Russell, JADCO, WADA, Jamaican Anti-Doping Appeals Tribunal, West Indies
COMMENT
Print this article