The all-rounder also speaks of how coach Ravi Shastri has inspired him and the challenge of opening in Test matches. 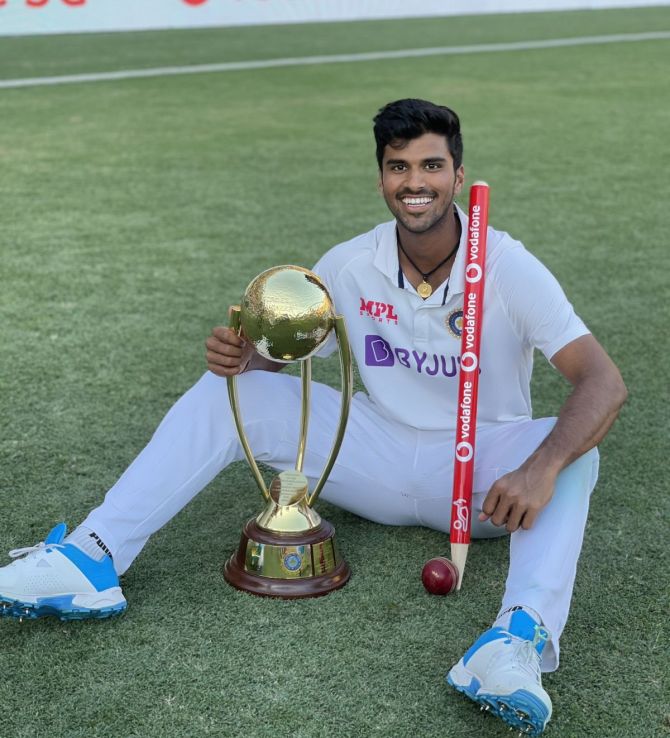 IMAGE: Washington Sundar scored 62 in the first innings at Gabba to keep India in the match and then a quick 22, including a hooked six off Pat Cummins, to play a part in the finishing act, apart from a match-haul of four wickets. Photograph: Washington Sundar/Twitter

Coach Ravi Shastri's dressing room stories of grit and determination work as a tonic for young Washington Sundar, who is ready for any challenge even if it means opening the batting for India in Test matches.

The 21-year-old Washington was a specialist top-order batsman during his India U-19 days but then honed his off-spin to such an extent that he is now an automatic choice in India's T20 team.

One of the heroes of India's epic triumph in Brisbane, which gave them the four-match Test series against Australia, Washington spoke about the head coach's influence on him.

"I think it will be a blessing for me if I ever get an opportunity to open the batting for India in Tests. I think I will accept the challenge just like our coach Ravi sir did during his playing days," Washington told PTI during an interaction from his Chennai residence.

He scored 62 in the first innings at Gabba to keep India in the match and then a quick 22, including a hooked six off Pat Cummins, to play a part in the finishing act, apart from a match-haul of four wickets.

"Ravi sir tells us very inspiring stories from his playing days. Like how he made his debut as a specialist spinner, got four wickets and batted at number 10 against New Zealand on debut.

"And how from there, he became a Test opener and played all those great fast bowlers. I would love to open the batting in Tests like him," said Washington, who enjoys a decent first-class batting average of 32 plus, which can only improve from hereon as he gets to play more games for India.

For a youngster coming into the Test side, he feels that there is no need to draw any inspiration from outside as there are so many role models in that India dressing room.

"As a youngster, when I look up for inspiration and motivation, I find so many role models in that dressing room. There is Virat Kohli, Rohit Sharma, Ajinkya Rahane, R Ashwin who have been such great performers.

"You look up to these players and they are always ready to guide you," said the tall off-spinner.

Washington was asked to stay back in Australia after the white ball series as a net bowler in order to help the Test team prepare and it meant that he was bowling a lot at the nets with the red kookaburra.

"It certainly helped my overall game as I was asked to stay back for Test matches. But it was the planning by our coaches including bowling coach Bharath Arun sir that really helped," said the man who has also played two T20 Internationals and an ODI for India.

So, what exactly was the planning that helped him?

"Since the Australian pitches have a lot more pace and bounce, I had to impart a lot of overspin on my deliveries. In Australia, you can't be slow through the air and the main strategy was to bowl up and over. That gets you more pace off the wicket and that's what I concentrated on.

"Obviously, on the first day in Brisbane, the pitch wasn't doing a lot for spinners but it was like a dream come true to get Steve Smith as my first Test wicket," he said.

During the epic final day chase, Washington said that once the equation came down to around 50 runs in 10 overs, he was confident that he and Rishabh Pant could pull it off.

"I knew that with Pant on the other side, the bowlers will be very much under pressure. If we could quickly get 25 or 30, then we can pull off the target. In the first innings, Shardul batted really well during our partnership."

A few days at home with family before entering the Chennai bio-bubble is helping Washington rejuvenate and also enjoy the delicious chicken biryani cooked by his mother.

His elder sister Shailaja is also a professional cricketer and the siblings do share and exchange notes even though that's a rarity, according to the soft-spoken man.

"If she (Shailaja) finds something that needs to be pointed out, she does that. Her suggestions have always been valuable.

"But more often than not, we don't discuss cricket at home. We both are involved with the game so much that when we are back home, there's plenty of other subjects that we discuss and not really cricket," he signed off. 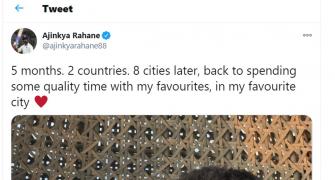 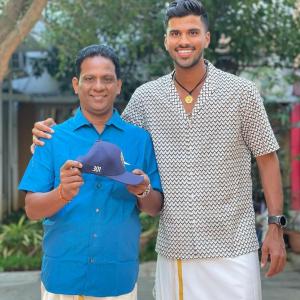 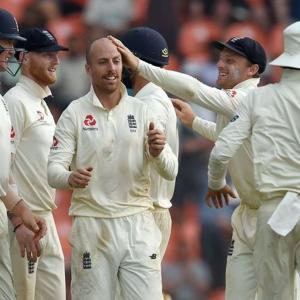