Images from the T20 World Cup final between New Zealand and Australia, in Dubai, on Sunday. 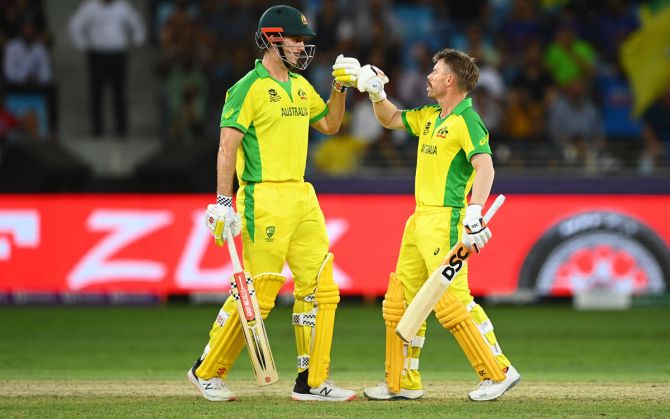 Australia scored a thumping eight-wicket victory over New Zealand in the final to lift their maiden T20 World Cup trophy, in Dubai, on Sunday.

David Warner (52) and Mitchell Marsh (77 not out) hit sublime half-centuries to render the title round one-sided after New Zealand skipper Kane Williamson top-scored with a brilliant 85-run knock in a total of 172 for 4, after Australia asked them to take first strike.

The Aussies started the chase well and rarely took their foot off the gas as they raced to the World Cup title with eight wickets and seven balls to spare, sparking jubilant celebrations in the UAE. 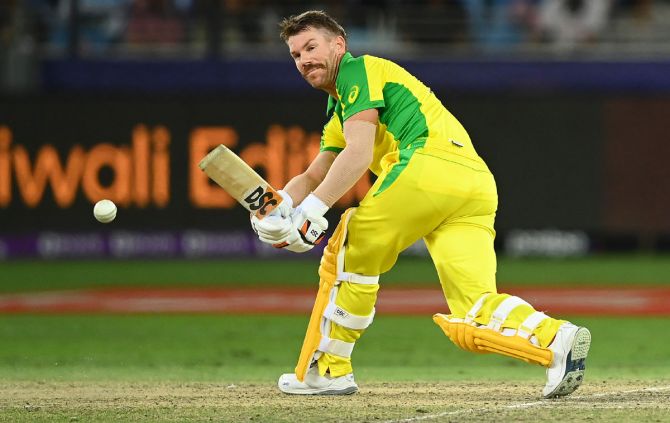 Australia had lost skipper Aaron Finch early when he top-edged Trent Boult to Daryl Mitchell in the deep. But the in-form Warner got off to a decent start, and Marsh upped the rate spectacularly early on, smashing 14 runs off the first three deliveries he faced.

With Warner and Marsh at the crease, Australia were 43 for 1 at the end of the Powerplay. The pair raised the momentum when the spinners came on, adding 39 runs in the following four overs, to leave Australia needing 91 from 60 balls to win the T20 World Cup at the halfway stage of the reply. 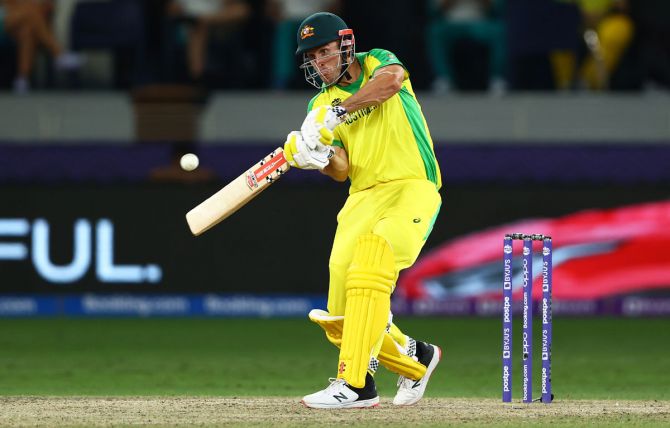 It was said before the match by New Zealand skipper Williamson that the final would come down to individual contributions. Indeed, it did, with two of Australia's top four delivering on the biggest stage in the run-chase.

First it was the irrepressible Warner who smoked Jimmy Neesham for six in the 11th over to reach his half-century off just 34 balls. 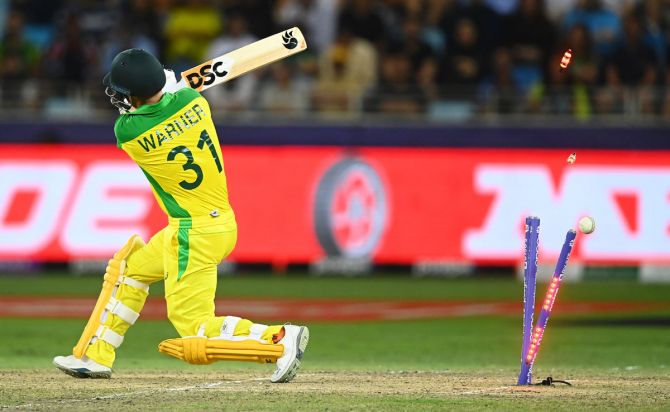 Boult was brought back to try and break the partnership as it edged towards a century-stand, and the left-armer did the trick, bowling Warner for 53.

But Marsh ensured the pace of the innings did not drop after Warner’s departure, providing a defining contribution of his own.

He reached his half-century three deliveries quicker than his team-mate to set a new record for the fastest 50 in a T20 World Cup final, and finished on 77 from 50.

Then it was left to Glenn Maxwell to see Australia over the line, and he reverse-swept Tim Southee for four to prompt a stream of yellow-shirted teammates to flood onto the pitch and join in the huge celebrations. 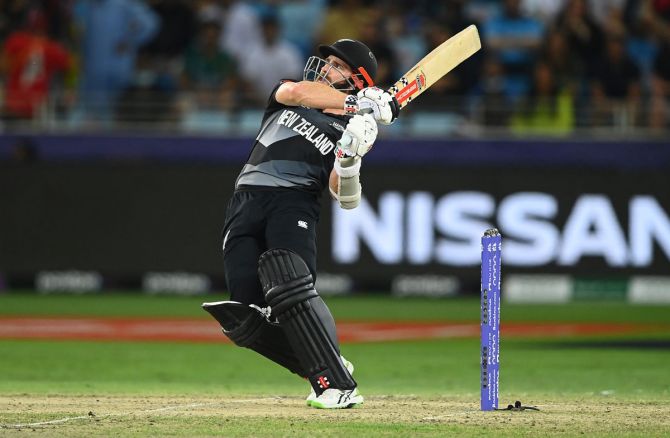 Earlier, Williamson produced a brilliant knock to enable New Zealand post 172 for 4. He hit 10 fours and 3 sixes in a 48-ball 85 as the Kiwis put up the highest total in a T20 World Cup final, after Australia won the toss and put them in to bat.

Williamson led the response in the second half of the innings, after some tight bowling from Josh Hazlewood (3 for 16) and Adam Zampa (1 for 26) restricted New Zealand to just 57 for 1 at the halfway stage.

He hit Mitchell Starc for 24 in one over - the most expensive ever in a World Cup final - and the pacer's costliest over in his white-ball career. Starc finished with depressing figures of 0 for 60 from four overs - the most expensive in T20 World Cup history.

Kane's innings ended when Hazlewood returned in the 18th over. The Aussie pacer first had Glenn Phillips caught in the deep and then accounted for Williamson in similar fashion.

Martin Guptill and Daryl Mitchell got the Black Caps off to initial flier. Starc struggled to find swing with the new ball in the opening over, with Guptill crunching a cut away for four off the second delivery to set up a nine-run opening over. IMAGE: Kane Williamson is watchful as he plays a shot back to the bower. Photograph: Alex Davidson/Getty Images

An eventful third over, the first for Glenn Maxwell, saw Mitchell smoke the all-rounder for a six off the first ball before Matthew Wade failed to cling on to an under-edge from Guptill, allowing the Black Caps opener an early let-off.

The Australians though did not have to wait much longer for their first wicket, as Hazlewood found Mitchell's outside edge and dismissed him for 11.

Hazlewood’s relentless line and length brought the Powerplay back under control for Australia as the Kiwis could only post 32 for 1 after six overs. The Kiwis found their flow immediately after the drinks break, with Starc going for 19 in the 11th over and Hazlewood’s fine evening taking a turn when he failed to take a catch in the deep that would have dismissed Williamson.

Just as New Zealand threatened to let loose, Zampa lured Guptill into a miscued flick that was taken by Marcus Stoinis in the deep.

The opener was sent back for an uncharacteristically slow 28 off 35.

Zampa bowled out his full set of four overs through the middle, finishing with economical figures of 1 for 26, his most impressive spell in the tournament.

Williamson, looking in fine touch, raced to 51 off 33 balls when he smashed Maxwell for back-to-back sixes to reach his milestone.

New Zealand captain’s takedown of Starc then set New Zealand up brilliantly to reach the sort of total that had looked a long way off at the halfway stage. 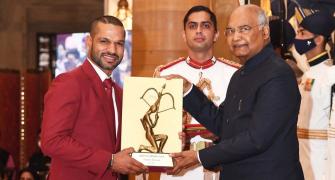 Will continue to work hard to make India proud: Dhawan 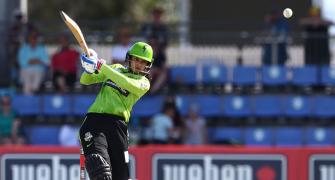 'Don't change your expectations from me' 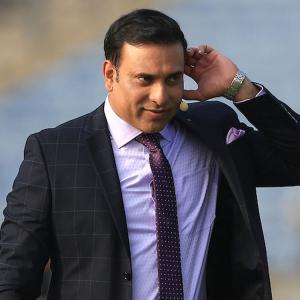 Laxman will be next NCA head: BCCI official 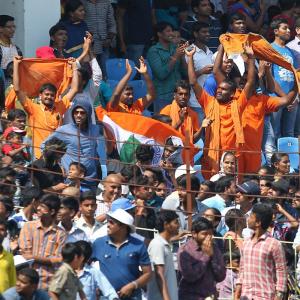