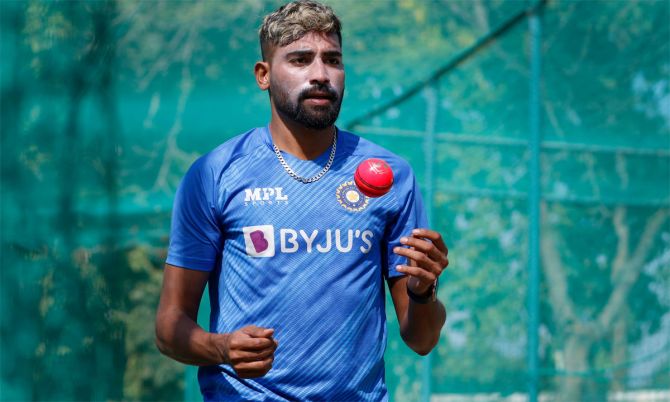 IMAGE: Mohammed Siraj could be included for the day night Test against Sri Lanka, starting on Saturday. Photograph: BCCI/Twitter

India demolished Sri Lanka by an innings and 222 runs in the first Test against Sri Lanka in Mohali. They will look to continue in the same vein and complete a 2-0 series clean sweep over the hapless Lankans.

India's top batters were unable to carry on after getting off to starts in the Mohali Test. However, the middle and lower order came to the party as they showcased India's batting depth.

Rishabh Pant smashed an entertaining 96 to take the game away from Sri Lanka, while Ravindra Jadeja showed why he is ranked the world's No 1 all-rounder with a splendid knock of 175. Ravichandran Ashwin hit a fluent 61 to power India to a huge 574/8 declared.

In reply, Sri Lanka were unable to get past 200 in both their innings, with Jadeja taking nine wickets in the match and Ashwin taking seven.

The second Test, a day-night affair to be played with the pink ball, might force India to alter their combination.

They could go in with three pace bowlers with Mohammed Siraj likely to make a comeback in place of off-spinner Jayant Yadav, who went wicketless in the first Test.

In India's last pink ball Test, against England in Ahmedabad in February last year, it was the spinners who did most of the damage in a low-scoring game.

Axar Patel took five wickets in both innings while Ashwin claimed seven wickets in the game as the Test finished inside two days on a pitch which took sharp turn right from the start.

It remains to be seen if the pitch at the M Chinnaswamy stadium in Bengaluru offers similar assistance to the spinners or it gives some help to the pace bowlers, as is the norm in pink ball Tests.

Given his super record in home Tests, Axar could be in running to play in the second Test if the conditions suit the spinners.

Axar has picked up 36 wickets in five Tests, all played at home, at an average of 11.86, with five five-wickets hauls and one 10-wicket haul.

Depending on the conditions, it could come down to a toss up between Axar and Siraj.

Who do you should be part of India's playing XI for the second Test against Sri Lanka? World Cup: What went wrong for the women in blue? Pujara to play for Sussex during English summer 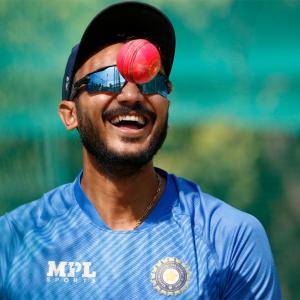 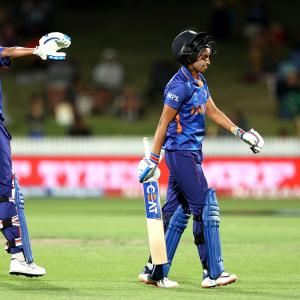