After winning the Border-Gavaskar Trophy, most of the Indian stars landed in the country, on Thursday, and every star continues to be welcomed with open arms.

T Natarajan, who was originally picked as a net bowler but became the first Indian cricketer to make his international debut across all three formats during the same tour, landed in Bengaluru and then took off for his village in Tamil Nadu's Salem. Once he reached his native Chinnappampatti village, Natarajan was accorded a festive welcome, complete with garlands and a chariot ride through the streets where people gathered in good numbers to acknowledge the new star.

People did not stop there and he was escorted by a huge crowd and the Indian pacer basked in the much-deserved glory.

"The last couple of months have been surreal. My time with #TeamIndia has been the best of my life. Playing Test cricket for India was a dream. We have overcome many hurdles on this tour to win this series. Overwhelmed with your support," Natarajan tweeted. IMAGE: Ajinkya Rahane is welcomed by his family and supporters in Mumbai. Photograph: PTI Photo

Chants of 'aala re aala Ajinkya aala' headlined a red carpet welcome for Ajinkya Rahane on his triumphant return from Australia with some other teammates.

Rahane also cut a cake to celebrate the team's win.

However, more surprises awaited the reticent batsman after he drove straight to his housing society in suburban Matunga, where residents had made elaborate preparations to accord their hero a royal welcome.

Rahane was welcomed with the beats of dhol, while others showered the cricketer with flower petals.

Rahane was also joined by his wife and two-year-old daughter in the celebration.

Soaking in the carnival-like atmosphere, Rahane acknowledged the love and adulation showered on him by the people of the city, many of whom waited for his team at the airport wearing masks amid the COVID-19 pandemic.

In his society, residents and videographers jostled to capture the moments and the unassuming batsman posed happily for them.

Rahane was then greeted in a traditional manner as he walked towards the entrance of the building. Shardul Thakur was also welcomed in a grand manner in Mahim-Palghar. 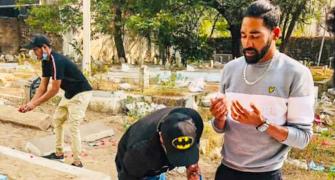 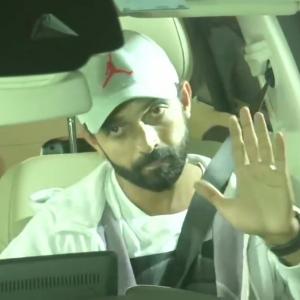