IMAGE: Muttiah Muralitharan had a stent fitted to unblock an artery. Photograph: BCCI/IPL

Sri Lankan cricket legend Muttiah Muralitharan was discharged on Monday after undergoing a coronary angioplasty at a city hospital in Chennai.

The 49-year-old former spinner, who is part of the Sunrisers Hyderabad support staff in the ongoing IPL, went for the planned procedure on Sunday.

"He underwent successful coronary angioplasty with stents yesterday under the care of Dr G Sengottuvelu, senior interventional cardiologist," Apollo Hospitals said in a release on Monday.

"He would resume his normal activities."

Muralitharan, the leading wicket-taker in international cricket with 1347 scalps, was admitted in the hospital for cardiac evaluation on Sunday.

He was part of Sri Lanka's ODI World Cup winning squad in 1996.

The Sri Lankan has been the bowling coach and mentor of Sunrisers Hyderabad since 2015. He featured for Chennai Super Kings and now defunct Kochi Tuskers Kerala in the IPL. 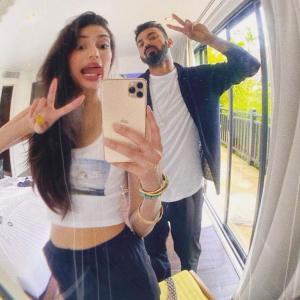