Glenn Maxwell came up with yet another blazing knock before Lakshmipathy Balaji returned a four-wicket haul, as Kings XI Punjab registered a crushing 72-run victory over Sunrisers Hyderabad in the Indian Premier League, in Sharjah, on Tuesday.

After scoring 95 and 89 in his last two innings, Maxwell again went after the bowlers and hit 95 from 43 balls, laced with nine sixes and five fours, to power Punjab to a mammoth 193 for six in the stipulated 20 overs. 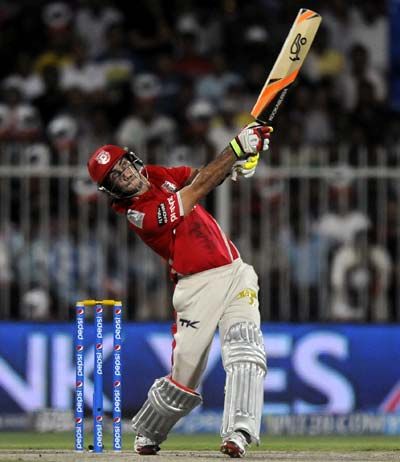 Punjab then came up with a clinical bowling display to dismiss Hyderabad for 121, with four balls to spare, and jump to top of the IPL standings after three straight wins.

Maxwell, who was dropped on 11 by David Warner off Karn Sharma in the 10th over before Darren Sammy had him caught on a no-ball in the 15th over for 62, put on a quickfire partnership of 68 runs off 27 balls with David Miller for the third wicket to steer Punjab to a huge total.

Veteran seamer Balaji returned incredible figures of 4-0-13-4, while Mitchell Johnson (2 for 26) and Akshar Patel (2 for 20) snapped two wickets each.

Chasing 194 for victory, Hyderabad found the going tough. They lost three early wickets and were reduced to 33 for three in 4.5 overs.

While Johnson struck the first blow, dismissing skipper Shikhar Dhawan (1) with his second delivery, it was Balaji's twin strike in his opening over that derailed their run-chase.

Aaron Finch was bowled by an incoming delivery for 19, while Warner was caught at point by Maxwell for eight as Punjab slipped to 33 for three in the fifth over.

Lokesh Rahul and Irfan Pathan tried to build a stand but left-arm spinner Akshar Patel dislodged the latter's bails as Hyderabad slipped further to 74 for five in 10.2 overs.

Sammy blasted 15 off 11 balls before becoming the third victim of Balaji, while Rahul was dismissed for 27 by Patel in the 15th over as the lower order capitulated pretty tamely.

Sehwag blasted three sixes and two fours in his 22-ball 30 before holing out to Sammy at long on.

Pujara too departed in the 11th over when his attempt to clear the mid-wicket boundary ended with a good catch by Venugopal Rao. The Saurashtra batsman scored 35 off 32 balls, with the help of six boundaries.

Maxwell continued from where he left as he sent the bowlers on a leather hunt with an array of shots.

In the 12th over, the Australian cracked back-to-back boundaries, hitting a six and four off Irfan Pathan, who was included in the team in place of Ishant Sharma.

The 25-year-old all-rounder exploded in the 13th over, blasting three successive sixes off leg-spinner Amit Mishra, while David Miller added another one as Punjab amassed 25 runs.

In the next over, Maxwell smashed a six and a couple of boundaries to take 16 runs off Sharma.

He got another reprieve when he was caught at deep mid-wicket off a no-ball in Sammy's second over.

Maxwell made Hyderabad pay for their mistake as he plundered another six through the square leg region.

Bhuvneshwar got rid off Miller, having him caught by Warner at long-off, but Maxwell continued his rampage at the other end as he sent Dale Steyn for a boundary through third-man.

He blasted two more sixes off Mishra in the 18th over before being dismissed in the same over, caught at long-off.

Bhuvneshwar dismissed Bailey (10) and Johnson (4) in the last over to contain Punjab within the 200-mark.

For Hyderabad, Bhuvneshwar emerged as the best bowler as he returned with figures of 4-0-19-3. 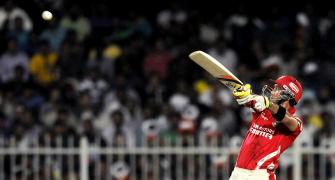 'Big Show' Maxwell says having a bit of fun in the IPL! 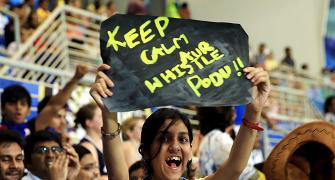 IPL 7 PHOTOS: Fans make it a Super day for Chennai!