IMAGE: Shardul Thakur celebrates the wicket of Rory Burns during England's second innings on Day 5 of the fourth Test at The Oval in London on Monday. Photograph: Julian Finney/Getty Images

Rohit Sharma took the player-of-the-match award and Jasprit Bumrah produced what pundits called the 'spell of the summer' but Shardul Thakur's role was no less important in fashioning India's victory in the fourth Test against England on Monday.

The team led by Virat Kohli produced a bowling masterclass on a flat deck at The Oval to prevail by 157 runs and go 2-1 up in the five-Test series.

India conceded a 99-run first innings lead but Rohit's century powered them to 466 in their second innings before Bumrah and company dismantled England on the final day.

Unlike Rohit and Bumrah, Thakur's contribution -- two fifties and three crucial wickets -- was more spread out and with both the ball and the bat.

"I thought Shardul's was a match-winning effort. To be honest, he deserved the Man of the Match as well for the performance he put," Rohit said after collecting his award. IMAGE: Shardul Thakur launched a spectacular counter-attack to top-score for his side with 57 in India's first innings and followed it up with a breezy 60 in the second before claiming two wickets to clear the path for India's victory. Photograph: Julian Finney/Getty Images

Put into bat, India were 127/7 when number eight batsman Thakur launched a spectacular counter-attack to top-score for his side with 57.

The 36-ball blitz not only lent respectability to the Indian total but also lifted the morale of a team, who had been let down by their frontline batsmen.

With the ball in hand, the right-arm bowler dismissed Ollie Pope, whose 81 was the highest score in England's first innings.

Thakur made a breezy 60 in the second innings and claimed two crucial wickets to clear the path for India's victory.

Chasing 368, England were cruising at 100 for no loss when Thakur dismissed Rory Burns to break the stand.

The 29-year-old, dubbed 'Lord Shardul' by fans on social media, effectively sealed the match when he dismissed England's in-form captain Joe Root for 36.

"If you look at the impact performance we were looking for from the lower middle order, I think what Shardul has done in this game has to be remembered for a long time," Kohli said.

© Copyright 2023 Reuters Limited. All rights reserved. Republication or redistribution of Reuters content, including by framing or similar means, is expressly prohibited without the prior written consent of Reuters. Reuters shall not be liable for any errors or delays in the content, or for any actions taken in reliance thereon.
Related News: Shardul Thakur, Rory Burns, Jasprit Bumrah, Rohit Sharma, India
COMMENT
Print this article 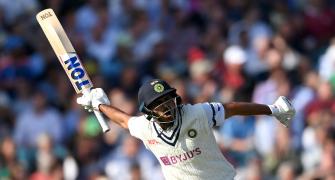 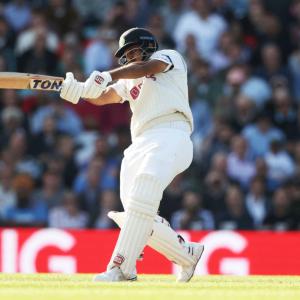