News
Business
Movies
Sports
Cricket
Get Ahead
Money Tips
Shopping
Sign in  |  Create a Rediffmail account
Rediff.com  » Cricket » A Day of Magical Records at the Oval

Rajneesh Gupta lists all the important numbers from Day 5 of the 4th Test at the Oval. 24 Number of Tests taken by Jasprit Bumrah to take 100 Test wickets -- the fewest for an Indian pacer. Kapil Dev took 25 Tests to do so.

50 Score on which four batsmen got out in the Test, one in each innings -- Virat Kohli in the first innings, Chris Woakes in the second innings, Rishabh Pant in the third innings and Rory Burns in the fourth innings.

This is the first Test in which there have been four dismissals for exactly 50.

2 Number of times England have posted an opening century stand in the fourth innings of a Test against India.

The only other such occasion was in 1964 at Mumbai when Brian Bolus and Jimmy Binks added 125 runs. That match ended in a draw. 17.00 Joe Root's batting average in the series while facing Shardul Thakur -- 34 runs and two dismissals. Against other Indian bowlers he averages 132.50 (530 runs and four dismissals).

29 Number of run-outs made by India in the field in Tests in the last five years -- the most by any side.

1 Only once before has India won two matches in a Test series in England -- in 1986 (under Kapil Dev).

3 Number of times India have won the very next Test after suffering an innings defeat in an away series.

India winning the very next Test after an innings defeat

in an away series 2 The higher first innings deficits than 99 in this Test which India overcame to win a Test outside India. 1 Only once have India won a Test on foreign soil after scoring less than 191 in the first innings of the match -- at Johannesburg in 2018 India won despite scoring only 187.

1971 The last and only other time India had won a Test at the Oval. 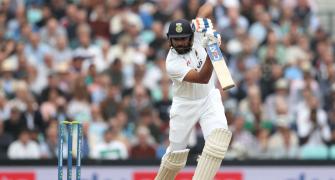 Rohit on why his Oval Test century was special Kohli rates Oval bowling show among Top 3 in his reign 'As soon as ball was reversing, Bumrah wanted it'