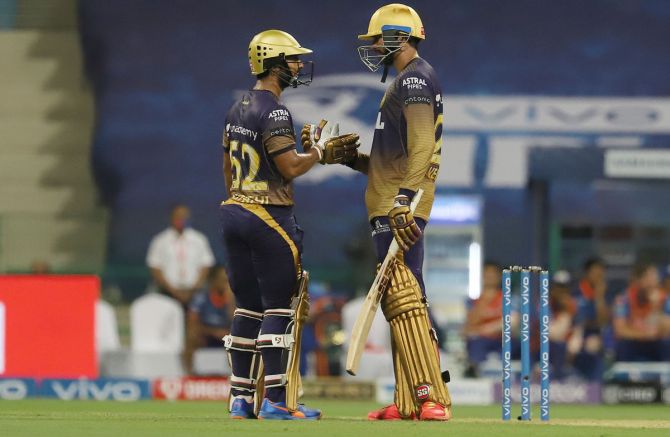 They finished the first leg of IPL 2021 in seventh place, with just two wins from seven games, but Kolkata Knight Riders have bounced back strongly in the UAE, winning their first two matches by huge margins to jump to fourth in standings.

KKR Head Coach Brendon McCullum had promised a drastic change of approach for the second leg after his team failed to live up to expectations in the first earlier this year.

'We are going to try and entertain and take the opposition on. There were sometimes throughout the season when I just felt we were being paralysed a little bit by fear,' McCullum said last week.

Young Venkatesh Iyer has followed his coach's instructions to the T with an attacking approach with the bat in the first two games -- against Royal Challengers Bangalore and Mumbai Indians in Abu Dhabi on Thursday.

Not many would bet against Mumbai Indians defending a total of 156 irrespective of the conditions, with a bowling attack featuring Jasprit Bumrah, Trent Boult, Adam Milne, Krunal Pandya and Rahul Chahar -- all of whom have played international cricket.

Iyer and Shubman Gill set the ball rolling as they put on 40 runs for the opening wicket from just three overs.

Iyer then consolidated KKR's position in Rahul Tripathi's company as the duo took apart the Mumbai bowling in the middle overs.

While left-hander Iyer went on the rampage against Boult, Bumrah and Milne in the Powerplay, Tripathi ensured KKR didn't lose the momentum in the middle overs with regular boundaries after the field was spread around.

KKR made most of the Powerplay to race to 63/1 in six overs. It was raining boundaries at the Sheikh Zayed stadium in Abu Dhabi with Mumbai Indians Captain Rohit Sharma looking totally helpless -- something he has rarely experienced before.

Venkatesh brought up his fifty from just 25 balls in the 11th over and Tripathi joined him in the next over when his leading edge off Bumrah went over third-man for a six.

Venkatesh was bowled by Bumrah, who deceived the batter with the slower ball. But his 88-run partnership for the second wicket with Tripathi from just 52 balls had sealed the contest in KKR's favour.

This was KKR's second win in a row and they jumped to fourth in the standings with four wins from nine games, while defending champions Mumbai Indians, on the same number of points, slipped to sixth because of their inferior run rate. 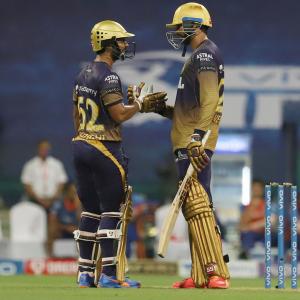 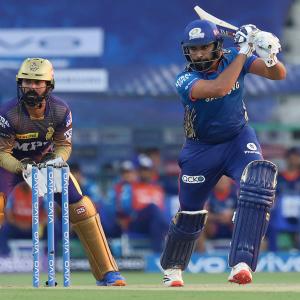