SunRisers Hyderabad's decision to put Kings XI Punjab in to bat seemed a winner as SRH bowled and fielded well to restrict KXIP to 126 for 7.

127 was a gettable target even on a pitch that was slowing down as the innings progressed. With thoughtful, calculated, batting, bagging 14 points to stay in the hunt for the play-offs would not be a task for SRH. Alas! Their batting let them down again.

SunRisers got off to a rollicking start as Captain David Warner enjoyed a majority of the strike, and he made the most of it.

Warner hammered Shami for 28 runs off his first three overs. SRH dominated the Powerplay overs as 52 runs came off the first six overs.

It looked like SunRisers wanted to race to the target with the net run rate in mind. However, their hopes were dashed once the spinners came in to bowl.

Murugan Ashwin and Ravi Bishnoi stemmed the flow of runs. Bishnoi began SRH's time in the rut as he affected the first dismissal -- Warner caught behind for 35 off 20 in the 7th over.

Ashwin accounted for Jonny Bairstow who looked uncomfortable against the leggies. The Englishman tried to sweep Ashwin, but the ball spun back and had Bairstow bowled around his legs.

Abdul Samad was next to go after Chris Jordan took a well-timed catch to bring Manish Pandey and Vijay Shankar -- whose unbroken 140 run stand won SRH the game against the Rajasthan Royals -- to the crease.

For four overs there were no boundaries and just singles came in the over. Pandey struggled to get going on a track that was getting slower. Shankar then took Arshdeep and Ashwin for boundaries in back-to-back overs. 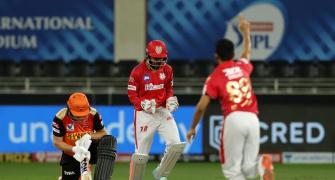 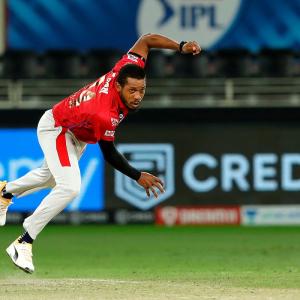