It must have been a tough couple of days for Suryakumar Yadav, who, despite his consistent showing in domestic cricket and the IPL in the last couple of years, wasn't picked in the Indian ODI or T20I team for the tour of Australia.

Rather than sulk over the snub, Yadav gave a befitting reply to the selectors with a magnificent knock that helped the Mumbai Indians outclass the Royal Challengers Bangalore by five wickets and all but seal their place in the IPL play-offs.

No one could miss Surya's steely determination as he stared right back at India and RCB Captain Virat Kohli who was looking for every opportunity to unsettle the Mumbai No 3.

Chasing 165 for victory, Mumbai made a steady start as the openers put on 37 runs before Quinton de Kock perished for 18 in the sixth over.

Surya was in full flow right from the start. He whipped Mohammed Siraj for three runs through midwicket to get off the mark.

The spin duo of Washington Sundar and Yuzvendra Chahal strung together three tight overs, conceding just 13 runs to build up some pressure before Surya broke the shackles to get Mumbai back on track.

He went after Chahal, hitting the leggie for a six over midwicket, top edging the slog sweep. He got the sweep right a few balls later for another boundary through square leg.

RCB continued to chip away at the wickets as Saurabh Tiwary was brilliantly caught by Devdutt Padikkal at mid-off off Siraj in the 11th over.

But there was no stopping Surya. He played the beautiful inside-out shot over the covers off Chahal for a six. He then tore into Dale Steyn, smashing the veteran pacer for three fours in the 13th over.

He repeated the dose on Siraj in the 16th over with three boundaries during which he also raced to his fifty from 29 balls.

One of his standout shots was definitely the paddle scoop against Steyn for a six over fine leg. Fittingly he hit the winning runs with a four over the covers off Siraj.

He finished on a magnificent 79 not out from 43 balls, laced with 10 fours and three sixes, to further prove to the selectors and team management why they were wrong in not taking him to Australia.

After the win, Surya calmly gestured towards the overjoyed Mumbai Indians dugout and indicated with hand signs to say: 'Chill guys, I am there!' 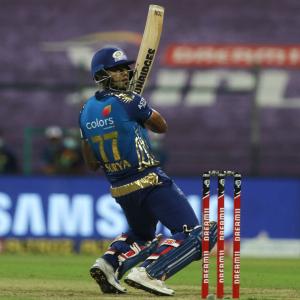