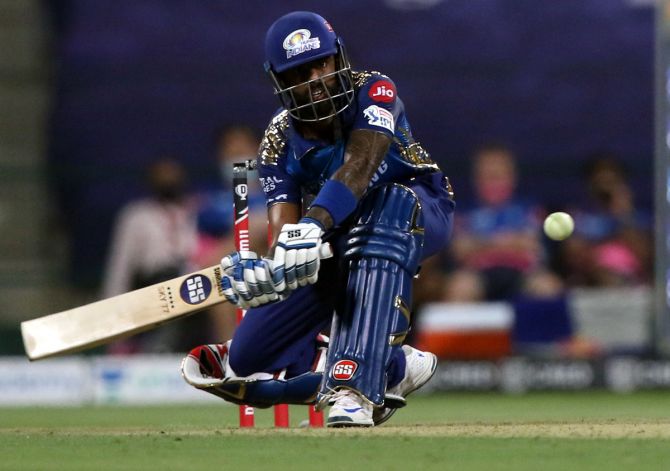 IMAGE: Mumbai Indians batsman Suryakumar Yadav during his unbeaten 79 off 47 balls against Rajasthan Royals in the IPL match in Abu Dhabi, on Tuesday. Photograph: BCCI/IPL

He was back among the runs, blazing his way to an unbeaten 79 off just 47-balls and propelling Mumbai Indians to an imposing 193 for 4, before their bowlers, led by Jasprit Bumrah, bundled out Rajasthan Royals for 136.

Thus, it wasn’t surprising that his skipper, Rohit Sharma, lavished praise on him.

"It (a big knock) was coming. I spoke to him (Suryakumar) before the game as well. He was batting really well all these games. He got off to a good start and it was just about making sure, you know, that the shot-making sometimes can be very, very important. Today his shot-making was perfect.

"We wanted him to bat till the end because of those innovative shots that he has; it was quite handy towards the end," Rohit said at the post-match presentation.

He also said the pitches in the UAE are conducive to the pacers and it was good to see his bowlers exploit the conditions well.

"When we knew that the IPL is going to happen in Dubai, Abu Dhabi, we were not sure how the pitches were going to be, whether the pace-battery we have got will be helpful or not. But coming here and looking at the pitches here, it is quite helpful for the seamers.

"Today it was nipping around to start with and towards the end as well, so good to have guys like those (the pacers) in your squad who can exploit the conditions very well,” said Rohit.

“Obviously, losing wickets early does not help us. We haven't been able to get off to a good start in the last three games. So outside of Jos (Buttler) and Jofra (Archer) in the end there, we have got to do a bit of work with our batting, I'm sure,” Smith said.

"I don't think we need to panic too much. It is just about implementing our plans and playing some good cricket for longer; we have not been able to do that in the last three games and we got to turn that around quickly." 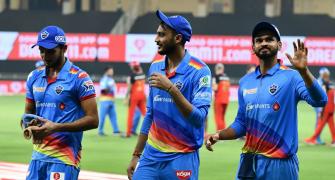 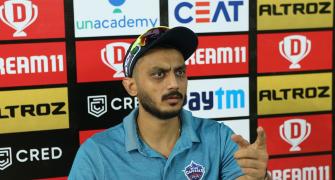 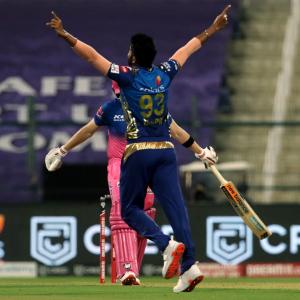