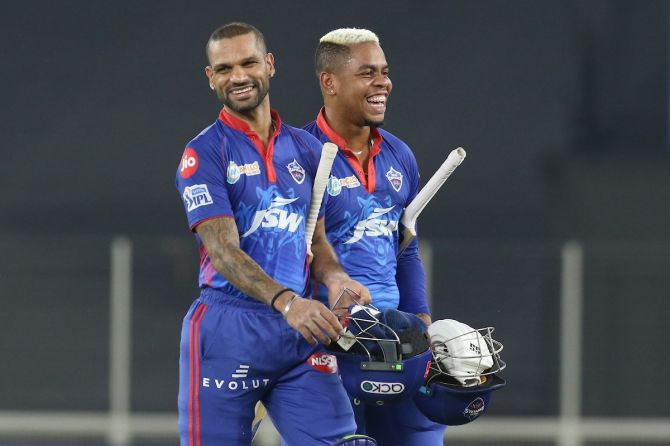 Shikhar Dhawan led the way with a fine fifty as Delhi Capitals easily beat Punjab Kings by seven wickets in the Indian Premier League match, in Ahmedabad, on Sunday.

Chasing 167, Delhi Capitals got off to a flying start as openers Prithvi Shaw and Dhawan put on 63 runs inside the first six overs.

There was no looking back thereafter. Dhawan finished unbeaten on 69 as Delhi overhauled the 167-run target in 17.4 overs.

The victory took Delhi Capitals to the top rung in the eight-team league with 12 points from eight games. 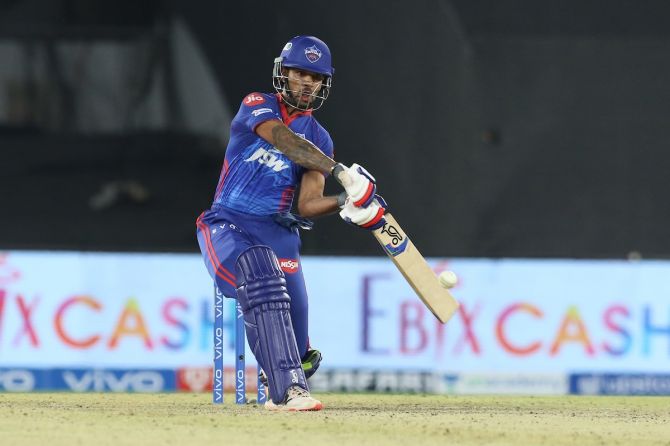 Chris Jordon, Harpreet Brar, and Riley Meredith took a wicket each for the Punjab Kings. Chasing 167, Shaw and Dhawan blazed away in the powerplay overs. The introduction of Harpreet Brar through paid off immediately as he clean-bowled Prithvi (39) in the seventh over of the innings.

Against the run of play, left-arm spinner Brar carried on from where he left off in the game against Royal Challengers Bangalore to dismiss the well-set Shaw with his first delivery, which turned just enough to clip the off-stump.

Steve Smith then joined Dhawan in the middle and the duo put on 47 runs for the second wicket. 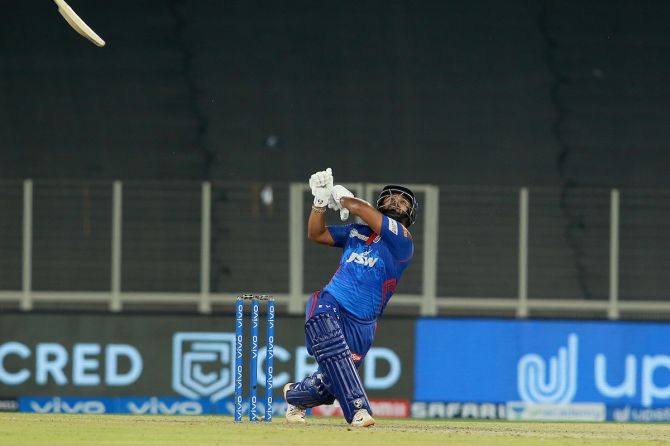 After the wicket of Shaw, Punjab brought down the scoring rate, conceding almost run-a-ball from over 7 to 10.

However, Punjab needed regular wickets to keep themselves in the game but that never came.

Following Smith's exit, Dhawan stepped on the accelerator and swept Ravi Bishnoi for a six to complete his 44th fifty in the IPL. 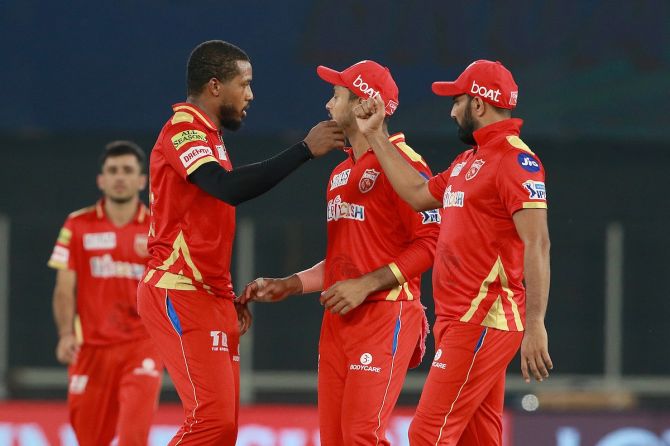 It was followed by couple of fours in the same over.

However, with just 50 runs needed for victory, Delhi lost Smith for 24 in the 13th over.

Rishabh Pant came to the middle and played a useful 14-run cameo.

From there on, there was no stopping Delhi as in West Indies batsman Shimron Hetmyer (16 off 4) smashed two sixes and a four in the 18th over to seal victory with 14 balls to spare. 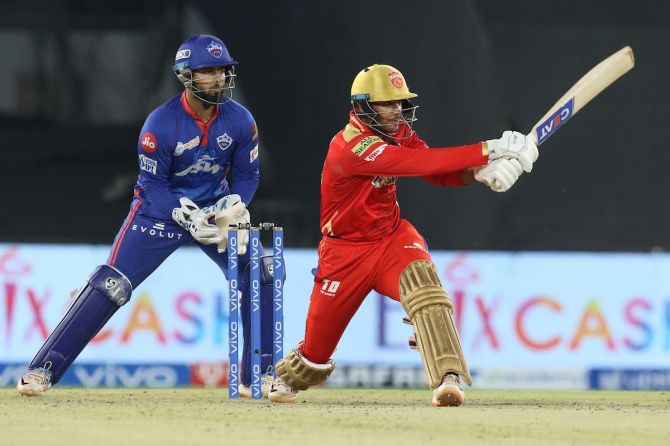 IMAGE: Mayank Agarwal hit 8 fours and 4 sixes in an unbeaten 99 during the IPL match against Delhi Capitals in Ahmedabad, on Sunday. Photograph: BCCI

Earlier, Mayank Agarwal narrowly missed out on a hundred, but did enough to rally Punjab Kings to 166 for 6.

Leading the side in the absence K L Rahul, who was hospitalised earlier on Sunday after been diagnosed with acute appendicitis, he scored an unbeaten 99 to help Punjab Kings recover from the loss of early wickets and put up a fighting total.

Dawid Malan was the only other batsman who made a noteworthy contribution of 26 from as many balls as Kagiso Rabada snared three wickets for 36 runs.

Asked to bat first, the Kings had a bad start, losing Prabhsimran Singh and Chris Gayle inside the first six overs with only 39 runs on the board, before 52-run partnership between Agarwal and Malan revived the innings.

Prabhsimran Singh and Agarwal opened the batting for the Punjab Kings while Ishant Sharma got the bowling underway for Delhi Capitals, bowling a maiden over. 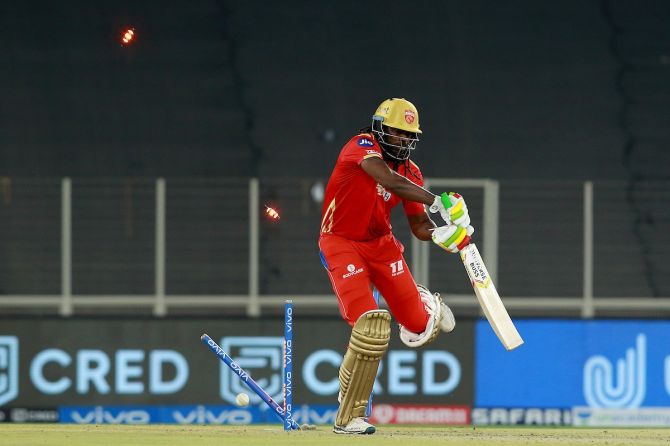 Marcus Stoinis then conceded just six runs in the next over as the Punjab openers adopted a cautious approach.

Prabhsimran hit Ishant for a six in the third over to get the innings going as Punjab got nine from it.

Kagiso Rabada was introduced in the fourth over and the South Africa pacer struck with his third delivery, dismissing Prabhsimran.

The batsman tried to dispatch it over extra-cover but did not get much elevation and Steven Smith took a sharp catch. Chris Gayle, who replaced Prabhsimran, hit Avesh Khan for a four in the next over but became Rabada's second victim off the second ball of the sixth over.

The West Indian latched on to a full toss, but the ball took outside edge and crashed into the stumps. He was out for 13 off 9, including a four and six, before Punjab Kings finished the powerplay with 39 for 2.

Dawid Malan took time to settle down and scored 11 off 17 balls before hitting for a six and four in the 12th over. However, Axar Patel, who conceded just seven in his first two overs, returned and bowled him with his first delivery in the 13th over. 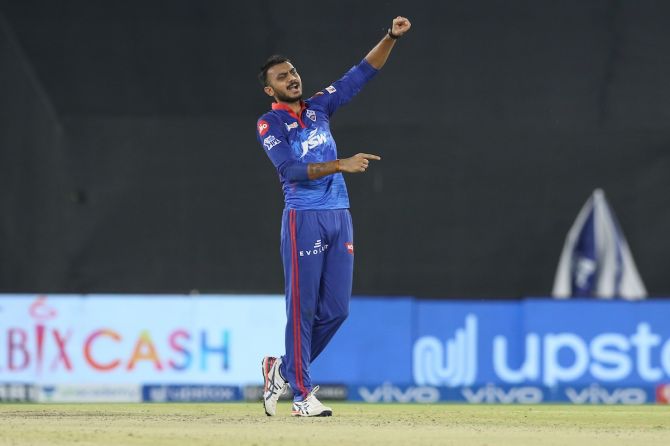 Having played too many dot balls, the England batsman went for a big hit, missed and looked back to see his leg-stump uprooted.

Two deliveries later Delhi got another wicket when Deepak Hooda was run-out. 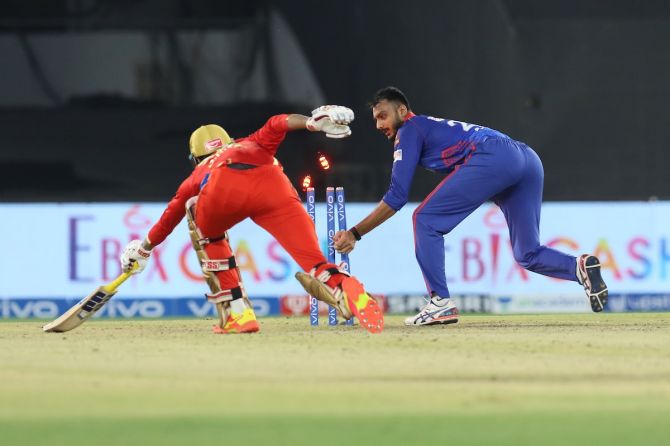 Agarwal tapped a delivery from Axar to the right of Shimron Hetmyer and took off for a single, but Hooda was late in responding and Axar did well to take off the bails.

Agarwal then launched an all-out assault and clobbered the bowlers in the death overs, even as Shahrukh Khan (4) and Chris Jordon (2) disappointed.

He hit a four, six and four off the last three deliveries of the innings but missed out on a hundred despite 23 runs coming from the over.

Punjab finished with a decent 166 for 6. 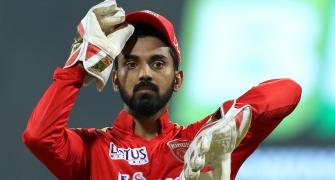 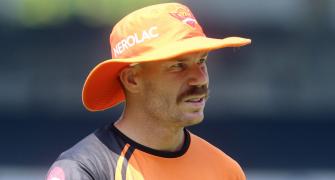 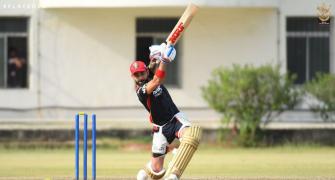 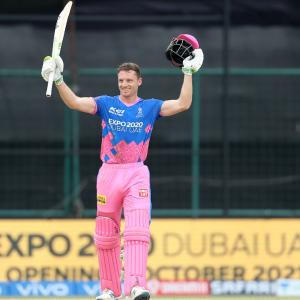 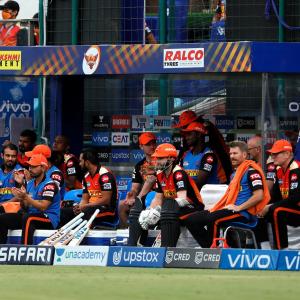