Dravid led from the front with a classy 48-ball-53, his fourth half-century in this IPL edition, while Rahane played an equally impressive unbeaten 63 as Royals maintained their impeccable record at home.

They now have 16 points with eight wins and look like firm contenders for a berth in the knock-out round.

Delhi Daredevils, whose season has gone from bad to worse, stay put in eighth place with six points.

Royals’ seventh win at home came with 13 balls to spare. After restricting Delhi to 154 for four, they hit up the required runs, scoring 155 for 1.

Shane Watson was unbeaten on a 14-ball 28, laced with three fours and one six. 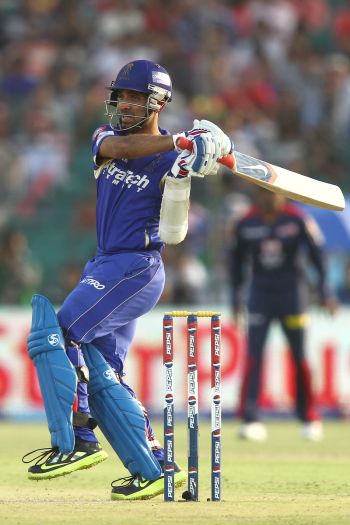 Dravid and Rahane added 108 runs for the opening-wicket partnership in just 13.4 overs, the former India captain the more aggressive of the two.

In the process, Royals also registered their highest opening-wicket partnership in this edition of the IPL, surpassing the 98 against Pune Warriors last week.

For Daredevils, Rohrer hit a fine 39-ball 63 under trying conditions, while Mahela Jayawardene (34) and Kedar Jadhav (23 not out) chipped in with useful contributions to help their side post a competitive total, which, however, was not enough in the end.

Dravid and Rahane gave Royals a solid start in the run-chase. Both made short work of Delhi bowlers and enthralled a near sell-out crowd with their vast repertoire of stroke-play.

Delhi's misery was further compounded by their butter-fingered fielders when Rahane was dropped by Pawan Negi at extra-cover off Morne Morkel when the batsman was at an individual score of 4.

Rahane made full use of the reprieve and raised a century-plus partnership with Dravid. It was a vintage Dravid show as he cut and drove the Delhi bowlers to reach his second successive fifty in the tournament off just 45 balls.

The fact that Daredevils made as many as four changes in their bowling department for this game did not help as the duo of Dravid and Rahane played them with utmost ease.

Dravid was finally out in the innings' 14th over, caught by Ajit Agarkar off Siddharth Kaul at long-on while going for an expensive pull.

However, Rahane and Watson ensured that Royals remained invincible at home with an unconquered 47-run partnership for the second wicket.

Earlier, Rohrer put on display some innovative shots to single-handedly guide Daredevils past 150 runs, which looked unlikely when the visitors were struggling at 78 for four.

He found an able ally in Kedar Jadhav (23 not out off 21 balls, 2x4) and together they added an unbeaten 76-run partnership for the fifth wicket. The last five overs yielded 53 runs for the Daredevils.

Electing to bat under scorching heat, Delhi were off to a poor start as Virender Sehwag (11) and CM Gautam (2) were sent back to pavilion in quick succession with scorecard reading 22 for 2.

Sehwag looked in good touch, hitting James Faulkner for two consecutive fours, before the lanky Australian pacer flummoxed him with a slower ball which swung in and uprooted the off-stump.

Sehwag, as usual, committed himself to the shot a tad too early, playing across the line.

Gautham, playing his first IPL match, departed in the next over as he chased a wide delivery outside off-stump and gave a simple catch to wicket-keeper Sanju Samson off Shane Watson.

Skipper Jayawardene held one end up strongly and in the company of David Warner (13) tried to resurrect the innings while picking a few occasional boundaries. That included four hits to the fence off Shaun Tait's second over.

However, Warner failed to contribute much to the team's cause before being caught by Sachin Baby off Stuart Binny at extra cover just before the first strategic time-out.

Rohrer tried to break the shackles with two successive fours off Mumbai leg-spinner Pravin Tambe, who became the oldest IPL debutant at 41 years and 212 days.

Jayawardene too tried to free his arm and hit Siddharth Trivedi for a six over mid–off before he ran out of patience and gifted his wicket at a crucial juncture.

Jayawardene failed to read the line of the ball and landed Dravid an easy catch at mid-wicket off Trivedi.

At 78 for four, Rohrer took the onus on himself and mixed caution with aggression to take the team’s total past the 150-run mark.