Chasing a modest target of 126, the Royal Challengers romped with 6.5 overs to spare.

This was Bangalore's fifth win on the trot and it has taken their points tally to 13 from ten matches.

A victory against Rajasthan Royals at Jaipur on May 11 would put them in strong contention for a place in the top-four.

The ignominious defeat, on the other hand, has scuttled Kochi Tusker's hopes of advancing to the knock-out stage as they have just ten points from eleven games.

The crowd was delirious with his power-hitting before R Vinay Kumar uprooted his off-stump. 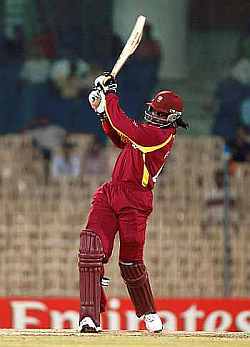 Sunday's bevy of five sixes took Gayle's tally to 26 in the fourth edition of the IPL. His punishing 44 took his run aggregate to 338 in five games. Interestingly, 280 of these runs have come through fours (31) and sixes.

The towering West Indies batsman has a phenomenal strike rate of over 200, clearly ahead of Virender Sehwag's 176.66.

Dilshan, too joined the party with a aggressive half-century, imperiously making up for his recent failures with some awesome strokes.

Earlier, expecting the wicket to assist spin, Kochi skipper Mahela Jayawardene opted to bat upon winning the toss but his batsmen committed a hara kiri, frittering away the 43-run opening wicket partnership provided by Michael Klinger (24) and Brendon McCullum (22).

Having started on a positive note, racing to 41 for no loss in five overs, Tuskers suddenly plummeted to 73 for four in 10.1 overs to hand the advantage to the Royal Challengers.

McCullum, who threatened to cut lose, was the first to depart, chipping Daniel Vettori to substitute Arun Karthik, fielding in place of the injured Cheteswar Pujara.

Klinger joined McCullum back in the hut, playing all over a Chris Gayle delivery to have his stumps rattled.

Much was expected of Jayawardene, but the captain was snaffled behind the wicket by AB de Villiers off the canny Vettori. Parthiv Patel also made things worse by having himself run out by an acrobatic de Villiers.

But the Bangalore outfit, clad in pastel green to support environment issues, had the match under their command by the 15th over, leaving the Tuskers struggling for oxygen at 95 for five.

They just could not get off the rack and eventually settled for a modest total in their allotted 20 overs, which at the end resulted in their demoralising defeat. 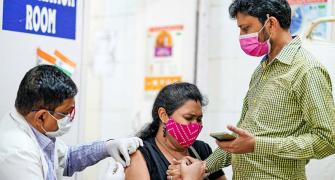