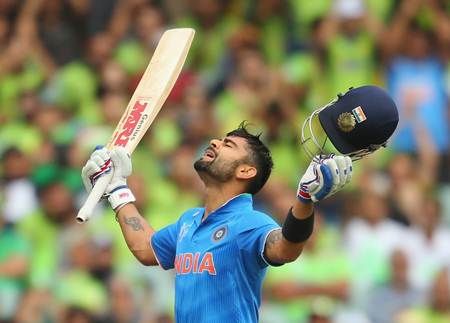 Virat Kohli scored an imperious century to steer India to a thumping 76 runs victory over Pakistan in their opening World Cup match at the Adelaide Oval on Sunday.

After putting up an imposing 300 for seven, they shot out their arch-rivals for only 224 to begin the defence of the crown they won in 2011 on a rousing note.

Pakistan never got going with the bat and captain Misbah-ul-Haq was the only batsman who offered resistance, scoring 76.

Mohammed Shami caused the most damage with the ball, claiming four wickets for 35 runs.

The much-anticipated Pool B grudge match attracted a noisy full house to the recently revamped ground with up to a billion more expected to tune in on the sub-continent and around the world.

It was the two thirds of the crowd dressed in the blue of India, though, who had the most to cheer about after India won the toss and chose to bat, Kohli brushing off his recent poor one-day form with a knock of 107.

Dropped from a difficult chance by Yasir Shah off Shahid Afridi on seven and again by wicketkeeper Umar Akmal on 76, Kohli otherwise played within himself and gave few chances in his 126-ball innings.

Pakistan, who have never beaten their neighbours in five previous World Cup meetings, had made an early breakthrough when Rohit Sharma misjudged the bounce of a Sohail Khan delivery and spooned the ball to Misbah-ul-Haq for 15.

That brought Kohli in to join Shikhar Dhawan and the pair set about ruthlessly snatching the momentum away from the Pakistanis with a dominant partnership of 129.

Their previously slick running between the wickets deserted them in the 30th over, however, and Dhawan was sent back by Kohli only to be run out for 73 by a direct hit.

Suresh Raina came in to join Kohli but there was no let up in the pace of Indian scoring with the left-hander bludgeoning three sixes in his 40-ball half century.

Kohli reached his hundred with a single to long on, whipping off his helmet to celebrate his 22nd century in one-dayers and the first by an Indian in a World Cup match against Pakistan.

Two balls later and Raina was celebrating his fifty but soon after raising his bat he was continuing the onslaught on the bowling to help drive the third-wicket partnership to 110.

They were separated when Kohli was caught behind after slashing at a Sohail delivery and Raina joined his team mate back in the dressing room soon afterwards for 74 when he holed out to the same bowler in the deep. 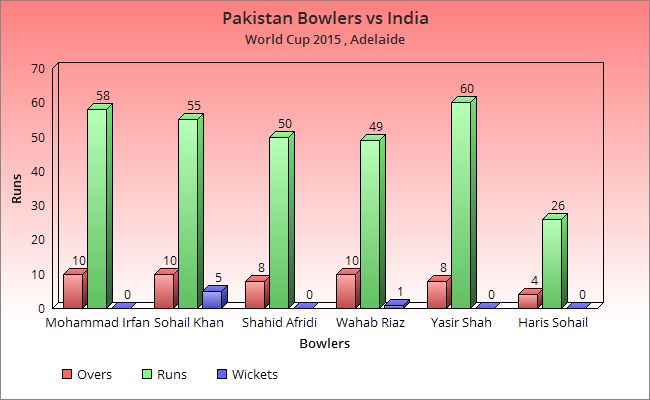 Sohail, who took 5-55 in his first one-dayer since 2011, helped wrest back some momentum for Pakistan, securing his five-wicket haul as Mahendra Singh Dhoni (18), Ravindra Jadeja (3) and Ajinkya Rahane (0) were sent back in the last two overs.

Pakistan started their reply steadily before a three-wicket blitz in two overs at the halfway mark of the innings saw opener Ahmed Shehzad depart for 47 and reduced them to 103 for five.

Skipper Misbah-ul-Haq (76) and Shahid Afridi flirted with a match-changing partnership but once the latter departed for 22 and Wahab Riaz followed in the same over, Pakistan's hopes of a first win over India in six World Cup attempts ended. Misbah played the captain's role in his 84-ball 76, which included nine fours and a six, but the 40-year-old's quest for a maiden One-day century will go on to his 157th match.

Shami took four for 35 but it was Mohit Sharma who drove the final nail into the coffin when Sohail Khan holed out for seven to end the Pakistan innings.

Shehzad, Sohaib Maqsood (0) and Akmal (0) were dismissed in two overs.

Image: India's Virat Kohli celebrates after scoring a hundred in the World Cup match against Pakistan at the Adelaide Oval on Sunday.