India offie, Harbhajan Singh, who plays in the Indian Premier League, had to withdraw his name from the players' draft of the ‘Hundred’ competition. The CSK spinner explains how the BCCI can save IPL while allowing its players play across leagues.

IMAGE: Senior off-spinner Harbhajan Singh clarified that he will be playing the next edition of Indian Premier League for Chennai Super Kings, withdrawing his name from the Players' Draft of the new 'The Hundred' league in the United Kingdom. Photograph: R Senthil Kumar/PTI

Indian spinner Harbhajan Singh has said that a new legacy will begin with former skipper Sourav Ganguly becoming the new president of the Board of Control for Cricket in India (BCCI).

"He has been a great leader for India and I personally, learnt a lot playing with him. During his captaincy, he led the team flawlessly. His rich legacy was carried forward by MS Dhoni and now Virat Kohli is doing a fine job. I am sure that he will set the same example in BCCI as its president too. There is a certain unparalleled quality that is recognised to grant a prestigious position such as this to any individual and Dada reeks of such qualities. I am certain a new legacy begins with this journey of his just as is his field's journey," Harbhajan told ANI.

Last month, it was announced that Harbhajan would be making his debut in a Tamil movie titled 'Dikkiloona' which will be directed by Karthik Yogi.

When the cricketer was asked how this development came along, he replied: "When Karthik came with the script, I honestly had no idea how it would materialise. I thought let's hear him out at least. However, it turned out pretty well, it got more and more interesting at every new stage. It surely is a challenging phase but equally exciting! I just pray and hope my hard work here also pays off well".

Recently, the cricketer was hopeful of playing in the inaugural 'Hundred' competition slated to be played in England next year. However, the player had to withdraw his name from the players' draft as it was in violation of BCCI's rules and regulations.

When asked whether the board should grant authority to players about participating in foreign leagues, the cricketer replied: "I withdrew my name because I am still playing IPL and if anyone still plays IPL or any form of cricket for BCCI, they are not allowed to play in any other league. If you ask me if I should be allowed to go to play for any other league apart from IPL then the board should consider few players, those who are not looking to play for India or maybe they can set criteria for players, who have played more than 50 Test matches, can take permission from the board to play there. In that way, they can still protect the IPL in a very limited number of people who can play abroad (just an idea)".

Harbhajan, who last played a match for India in 2016 has the experience of playing under both Virat Kohli and MS Dhoni, and talking about playing under both captains, the 39-year-old said: "I believe that India is serving its best on the performing field. We have won the maximum matches under our young talented captain Virat and legendary MS Dhoni. All credit goes to their captaincy along with the constant support of our young players. Naturally, everyone's style is different hence the executing skills would also vary but the aim is the same, it only results in a great team and fabulous performance," Harbhajan said. 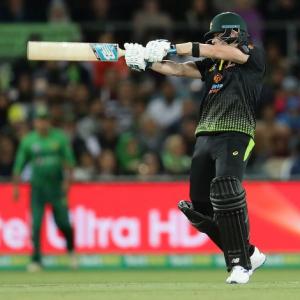