News
Business
Movies
Sports
Cricket
Get Ahead
Money Tips
Shopping
Sign in  |  Create a Rediffmail account
Rediff.com  » Cricket » 'Great to see fresh energy in the side'

Makeshift captain for the One-day series against South Africa, Shikhar Dhawan backed youngsters to come good in the three-match series that commences in Lucknow on Thursday.

India face the Proteas in opening one-dayer starting on Thursday.

"This series is a good exposure ahead of the 2023 World Cup. Youngsters will get more exposure playing against a great team. There are benefits all around. It will increase their experience and confidence. They have been doing well. They will learn from their mistakes as they play more. It is important for me to play as much as possible ahead of the World Cup," said.

Dhawan said that the whole team has practised well for the past two days and everyone is in the groove.

"This team is good. We have played with most of these boys in the West Indies and Zimbabwe. One or two new players have come into the team. There is a good tuning between everyone. It is great to see fresh energy and enthusiasm among the new players in the side. There is great energy in the new boys, they are confident," he added.

Dhawan said that he keeps the doors of communication opens to the youngsters in the squad.

"I try to keep the atmosphere happy and relaxed as it helps performance. I share my experiences with them as to what to do in a certain situation. I learn a lot from them too. It is always give and take," he added.

India had defeated South Africa 2-1 in the preceding T20 series but Dhawan expects a tough fight from the Proteas in the ODIs.

"South Africa has a good team. Winning and losing are part of the game but it is important to learn from defeats," he said.

"Both the teams made plenty of runs in the T20 series. It depends on pitch, dew factor and plenty of other factors."

Dhawan is not of the view that India has been experimenting with captaincy of late.

"Experiments were done in the team when senior players were not there. They were given rest -- need to manage their load otherwise there are chances of injuries. Whoever is made the captain he is the most senior-most players and capable for the job," Dhawan said.

It has been pouring heavily in Lucknow since Tuesday night and more rain is predicted for Thursday.

"Rain is not in our control but the good thing is that the drainage system of this ground is very good. We are very hopeful the match will happen tomorrow. We have done our preparation and the boys are in good state of mind," Dhawan signed off. 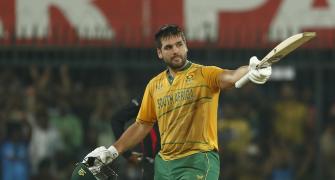