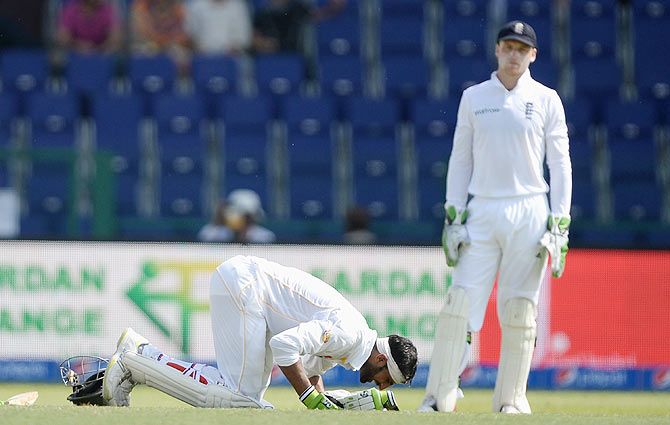 Pakistan declared their first innings on 523 for eight shortly after Shoaib Malik's marathon knock of 245 came to an end in the final session of the second day's play in the opening test against England in Abu Dhabi on Wednesday.

His shot found the hands of Ian Bell, who dropped two catches on the first day but managed to hold on to the catch above his head.

Stokes ended with figures of four for 57 as he took three wickets in the first 45 minutes after the tea break, with Sarfraz Ahmed (two) and Zulfiqar Babar (zero) falling tamely.

After failing to take a wicket in the first two sessions of the day, it took Mark Wood just three balls after tea to break the partnership of Malik and Asad Shafiq, with the latter falling leg before for 107.

The duo added 248, which was the highest ever fifth-wicket partnership for Pakistan against England.

© Copyright 2022 Reuters Limited. All rights reserved. Republication or redistribution of Reuters content, including by framing or similar means, is expressly prohibited without the prior written consent of Reuters. Reuters shall not be liable for any errors or delays in the content, or for any actions taken in reliance thereon.
Related News: Shoaib Malik, Pakistan, England, Abu Dhabi, Mark Wood
COMMENT
Print this article