IMAGE: MS Dhoni has been on a sabbatical and has refused to divulge his future plans. Photograph: Danish Siddiqui/Reuters

Mahendra Singh Dhoni was, on Thursday, dropped from the BCCI's list of centrally contracted players, raising fresh doubts on the future of the former India captain who has not played since the World Cup semifinal loss to New Zealand last year.

The BCCI announced the central contracts for the period of October 2019 to September 2020. The 38-year-old Dhoni was in the A category, which fetches a player Rs 5 crore as annual retainership, until last year.

Skipper Virat Kohli, his white-ball deputy Rohit Sharma and top pacer Jasprit Bumrah were retained in the highest A+ bracket of ₹ 7 crore.

Dhoni's contract not being renewed is not exactly a surprise as he has not played a competitive game since that World Cup semifinal on July 9. He has been on an sabbatical and has refused to divulge his future plans.

Head coach Ravi Shastri had recently said that Dhoni may soon end his ODI career but could be in contention for a spot in the T20 World Cup squad provided he does well in the IPL.

Among others, batsman K L Rahul has been promoted from B grade to A. Having lost his place in the Test side following a dismal tour of Australia last year, Rahul has made a strong comeback and been a consistent performer in the shorter formats.

Test opener Mayank Agarwal, who has done well since making his debut during the tour of Australia in 2018-19, has been included in the Grade B category, which also features Hardik Pandya and Yuzvendra Chahal along with two others.

Pacer Navdeep Saini and T20 specialist Washington Sundar are new entrants in Grade C alongside Shreyas Iyer, Deepak Chahar and Shardul Thakur. Though he has not played Tests, Saini has emerged as an option in all three formats.

Iyer, who made a limited-overs comeback following India's World Cup campaign, has cemented his place in the middle order and seems to be a stable number four that the team has been looking for.

Pacer Thakur too has made an impact in the limited opportunities he has got while the injured Chahar has become a strong contender for a spot in the T20 World Cup with a string of impressive performances, including a six-wicket haul against Bangladesh in November. It is the best ever in the shortest format till date.

The dropped list includes Ambati Rayudu, who has come out of retirement, and Dinesh Karthik, who was dropped from the ODI and T20 team following India's exit from the 50-over World Cup.

On Dhoni, outgoing chief selector MSK Prasad has already made his stance clear, saying that the World Cup-winning captain can only be selected again on the basis of performances.

While Dhoni has not revealed anything about his future, he is expected to captain Chennai Super Kings in the 2020 IPL.

One of the biggest names in Indian cricket, Dhoni led India to two world titles — the 2007 World T20 in South Africa and the 2011 ODI World Cup at home. 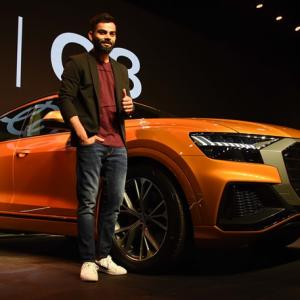