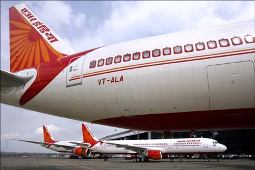 If you are a Central government employee wanting to buy an Air India flight ticket to avail of your leave travel concession, you could be forking out anything between 50 to 140 per cent more than the normal price offered to other passengers.

In what could be seen as another subsidy to the cash-strapped national carrier, the Air India website has opened a special section for LTC tickets to government servants.

Employees can also book it through authorised agents such as state-owned tourism and travel companies like Ashok Travel and Tours, Balmer and Lawrie and IRCTC (Indian Railway Catering and Tourism Corp).

For government employees, especially Grade A and  B employees who are entitled to fly on their holidays, it does not matter as the money is reimbursed by the government.

So, they are unlikely to go in for cheaper fares. Also there are some advantages -- the cancellation charges for LTC passengers is only Rs 200, compared to Rs 300 to Rs 1,500 in the normal ticketing system.

Moreover, about 20 seats are reserved for LTC passengers on any flight, so availability is not an issue.

For example, an economy class ticket on a Delhi-Mumbai Air India flight on October 15 will cost a regular buyer Rs 5,505, while  the same ticket under LTC will be 135 per cent higher at Rs 12,962.

The cost of an LTC seat is based on the date of issue of the ticket rather than the date of travel, said a travel agent of an authorised travel agency that sells Air India tickets.

An economy class seat in Air India flight is categorised under 14 classes. E class has the lowest fare and Yankee class has the highest. H class, at tenth , which is under the LTC-80 category, is allotted to Central government employees.

Considering that there are over 300 domestic flights daily in operation, effectively 6,000 seats are on offer under the LTC category on a daily basis.

Central government employees are reimbursed the amount at most equivalent to

"If the employee has bought a ticket of a class lower than H class, the cancellation amount ranges from Rs 500 to Rs 1,500.

"Hence, in case of indecisiveness of the date of journey, availing of LTC under H class is preferred over any other lower class," another authorised agent said.

An official in the railways ministry which competes with airlines for a share of the LTC pie said: "With LTC tickets of H class so highly priced, Air India is milking the government to maximum as it is assured that the central government will finance it.

"It is another form of subsidy for Air India."

Over a year ago, the rules were that it was mandatory for a central government employee to buy tickets only under H class to claim LTC even if other classes were cheaper.

However, an order was issued by the ministry of finance, amending the rules on March 4, 2011 under which "reimbursement of air fare lower than LTC-80 air fare of Air India will also be admissible for journeys performed by Air India under LTC as the intention is to ensure that the LTC claim should not in any case, exceed LTC-80 fare of Air India."

An email sent to Air India did not elicit any answer till press time.

However, an Air India executive who did not want to be identified, said: "It is the choice of the consumer and all the ministries have accepted the published fares."

According to the LTC rule, the central government employee and his family is entitled for travel twice in four years through any medium as in through railways, air, roadways and ship.

The list of eligible people includes the government servant's wife or husband and two surviving unmarried children or step children, wholly dependent on him or her.

One ticket can be availed to travel home and the other to travel to any part of India.

According to a central government employee: "Apart from that, the employee has to initially pay the money for the ticket from his own pocket.

"The time period of reimbursement also varies from a few months to a year or so."
Get Rediff News delivered into your Inbox.
Disha Kanwar in New Delhi
Source: