News
Business
Movies
Sports
Cricket
Get Ahead
Money Tips
Shopping
Sign in  |  Create a Rediffmail account
Rediff.com  » Business » Factories with up to 40 workers may be kept out of major labour laws

Union Cabinet to take a call this week 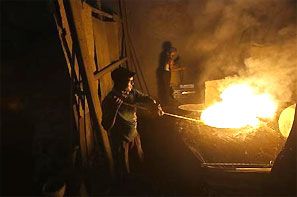 After proposing an overhaul in labour laws, the Narendra Modi-led central government is considering more reforms, this time for small factories.

The Cabinet is set to discuss this week a Bill to exempt the factories that employ up to 40 workers from 14 labour laws.

The government has drafted the Small Factories (Regulation of Employment and Conditions of Services) Bill, which is meant to keep small factories out of the ambit of certain major labour laws, such as the Industrial Disputes Act, the Factories Act, and the Payment of Wages Act.

Besides, there will be some relaxation in provisions of the Employees Provident Funds Act for these firms.

According to sources, the Union government plans to introduce this Bill in the current session of Parliament.

The Bill, if enacted in its current form, will allow businessmen to register or shut their small factories electronically.

A factory will be deemed registered within 30 days of filing an application, if no action is taken in this regard.

All that the employer will have to do is apply online or give a written application within 60 days of starting a factory.

There will be no inspectors; they will be replaced by ‘facilitators’, who will act as ‘guide for the establishment’.

These facilitators will issue ‘improvement notices’ to employers if they observe any defect.

And, in case of shutting down, the owner will have to notify to these facilitators electronically within 15 days of closing a unit.

Once the facilitator is convinced about the nature of closure, and after ensuring the wages to employees have been settled, he will remove the factory from his registers and cancel the registration certificate.

The Union government had in February this year held a meeting with representatives of worker and employer groups to discuss this Bill.

“The interest of the workers will always be foremost and this law is only for simplification and ease of doing business,” Labour Minister Bandaru Dattatreya had said at the meeting, minutes of which have been reviewed by Business Standard.

For the welfare of workers, all social security schemes will continue to apply at small factories, too.

For instance, firms with more than 20 workers will mandatorily contribute to the Employees Provident Fund Organisation.

Also, workers will get their wages through bank accounts, provided their salary exceeds Rs 1,000 a month.

The draft Bill says the employer ‘should take the effort’ to open a zero-balance bank account, in case the worker does not have one.

Workers at small factories will be allowed to do 96 hours of overtime in a quarter, compared with the earlier provision of 50 hours under the Factories Act.

Filing annual reports will become simpler for employers, as these will now be a considerably reduced document.

For this purpose, a unique labour identification number will be allotted to each employer after registration.

There also is a provision for employers to maintain their registers and records electronically.

The Bill will make it tougher for workers to go on strike.

If 10 or more workers are absent from duty without proper reason and in ‘a concerted manner’, the employer will be allowed to deduct eight days’ wages of each worker.

Raising disputes related to unfair labour practices at small factories will become stringent, as these will require at least 51 per cent of workers to do so.

In the Industrial Disputes Act, there is no minimum requirement to raise a dispute.

Also, workers who have worked for up to 240 days in a calendar year might be retrenched without prior notice.

Recently, the Union labour ministry had proposed integrating three laws -- the Trade Unions Act, the Industrial Disputes Act and the Industrial Employment (Standing Orders) Act -- into a single code for industrial relations, as part of its labour reform measures.