'We can’t have the best of both worlds -- large, efficient, world class government-owned banks, doing social banking and making profits.

'Why not set them free from the shackles of such obligations and run them as business units?' says Tamal Bandyopadhyay.

The seminal recommendation of a committee on banking sector reforms made in April 1998 is finally being implemented.

This is after Bharatiya Mahila Bank and a few associate banks of the State Bank of India (SBI) got merged with the nation’s largest lender and Vijaya Bank and Dena Bank have been amalgamated with Bank of Baroda (BoB).

India will now have fewer government-owned banks but those remaining will be larger and stronger.

The scale will make them efficient, help them expand credit, introduce new products, bring down the cost of money for customers and fuel economic growth.

The committee, headed by former Reserve Bank of India (RBI) governor M Narasimham, had asked for such mergers to have a “multiplier effect” on the industry.

In theory, they will have but there is a difference between what the committee had envisaged and what is being done.

The committee had said the “mergers should not be seen as a means of bailing out weak banks”.

Going by the contours of the four mega mergers, outlined by Finance Minister Nirmala Sitharaman, some of the weak banks will team up with a few stronger banks.

Still it’s a smart move, probably the best in the circumstances.

Ten large, medium and small banks will be clubbed into four.

What will happen to those six left behind -- Bank of India (BoI), Central Bank of India, Bank of Maharashtra, Indian Overseas Bank (IOB), Punjab & Sind Bank and UCO Bank? (I am not referring to IDBI Bank Ltd as now it is majority-owned by Life Insurance Corporation of India.)

Why have they been left out? Are they strong enough to fend for themselves?

As on June 30, UCO Bank’s gross bad loans are one-fourth of its loan book; for IOB, it’s over one-fifth; for the rest, it has been between 12.9 per cent and 19.9 per cent of their loan books.

What does the government do with them?

Also, how can it make the mega mergers successful and reap the benefit of economies of scale?

Even if the managements of these banks face challenges of technology, products, HR and branch rationalisation chin up, they will not yield the desired results unless the government follows a hands-off policy.

They must be driven by their respective boards and not the department of financial services of the finance ministry.

Not the chief risk officers alone, all senior executives must get market-related salaries.

And they must be freed from the glare of investigative agencies -- Central Vigilance Commission, Central Bureau of Investigation and Enforcement Directorate.

Incidentally, the employee stock option proposals at SBI and BoB have been gathering dust at the ministry for years.

They must also be freed from directed lending.

This government does not believe in “phone banking”. It does not tell the bankers which corporate houses to lend to but the tradition of directed lending continues.

Historically, most such targeted lending schemes have either failed or achieved very little, inflicting huge pain to the banks.

One such scheme was the Integrated Rural Development Programme (IRDP), launched in October 1980 to promote sustainable self-employment.

It offered subsidised bank credit to five poor families in every village (there are 650,000 villages) of Rs 10,000 annually, to buy buffaloes or cross-breed cows or goats.

By 1989, there were 25 million defaulters and not even 10 per cent paid back the loans, leading to the first loan waiver in 1990 for at least 44 million farmers with Rs 6,000 crore exposure to the PSBs.

Then there has been Self-Employment Scheme for the Educated Youth (SEEUY), later subsumed in the Prime Minister’s Rozgar Yojana (October 1993), which offered self-employment opportunities to educated employed youth.

For every collateral-free Rs 15,000 loan, the government provided 25 per cent subsidy.

The recovery of such loans was roughly one-third of the money lent.

The Self-Employment Programme for Urban Poor (SEPUP) was also a similar story.

Under the Kisan Credit Card (KCC) scheme, crop loans given to the farmers in the form of cash credit and term credit have continuously been rolled over to prevent millions of such accounts from turning bad.

Till March 2019, close to 10 per cent of the education loans given by the PSBs have not been paid back.

As on March 2019, 16.2 per cent of the Shishu loans have turned bad (for Bank of Maharashtra, it’s 48 per cent and for BoI and Punjab National Bank and a couple of others, at least 25 per cent); the bad loans in the Kishore scheme are 13.22 per cent (four banks, including SBI, have more than 20 per cent bad loans); and Tarun scheme, 9.61 per cent.

We are yet to know the state of affairs at the 59-minute loans (Rs 1 lakh to Rs 5 crore), as loans disbursed on the fast lane are not a year old as yet.

We can’t have the best of both worlds -- large, efficient, world class government-owned banks, doing social banking and making profits.

Why not set them free from the shackles of such obligations and run them as business units?

The six banks left out from the “NextGen” bandwagon can do all such things.

Since the government’s stake in them are as high as 85.6-92.5 per cent, it can buy back shares spending very little, assume full ownership and make them vehicles for social banking.

The rest -- six mega banks -- can run like business enterprises.

That will create enormous value for the government -- to encash for bridging the fiscal deficit and spending.

The government can have its cake and eat it too.

Tamal Bandyopadhyay, a consulting editor with Business Standard, is an author and senior adviser to Jana Small Finance Bank Ltd. His latest book, HDFC Bank 2.0: From Dawn to Digital has been released recently. 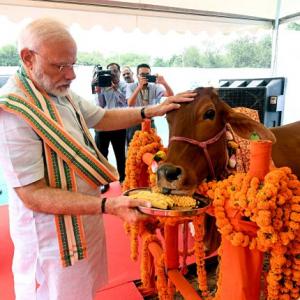