‘Key personages in the government, and that includes the prime minister, engage directly and actively to prevent the current downturn from morphing into 1980s-level growth rates,’ says T N Ninan. 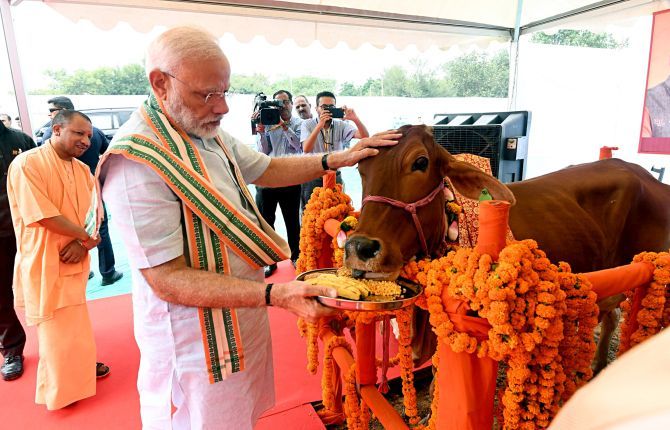 No one can accuse the second Modi government of inaction.

If anything, its first 100 days have seen frenetic activity -- historic action in Jammu and Kashmir, lots of legislation passed through Parliament, and lots of summitry by the prime minister: Bhutan, G7, the UAE, Russia, etc.

Coming up soon is China, after an address to the UN General Assembly.

Also worth noting is the critical difference in tone and approach that has resulted from the replacement of the late Arun Jaitley by Amit Shah as No. 2 in the Cabinet.

For all that, one is inclined to go back to Bill Clinton’s campaign slogan: “It’s the economy, stupid!”

Not that the economy has been ignored in these past 100 days, far from it. There is the mega-merger of government banks, the Budget and further opening up to foreign investment, while some of the new legislation is economic in content: Two new labour codes, and an amendment to the bankruptcy law.

On its part, the Reserve Bank has announced two rate cuts.

Yet, other than the finance minister, the rest of the government in New Delhi seems strangely disengaged with macro-economic policy issues. This is hard to understand when the economy faces an escalating employment problem, a crisis in farming, stagnation in manufacturing, and slack exports.

Clinton’s old slogan did nothing more than state the obvious. But sometimes, like today, the obvious needs to be stated. Especially when Modi’s latest economic initiatives, like his earlier ones, involve the spending of government money -- on handouts for farmers, a government-funded health insurance programme, and the like.

With the slow economic tempo undermining tax revenue assumptions for the second year in a row, the money required for these and other programmes may simply not be there.

There are larger ramifications to economic under-performance.

In a changing world order where nation-State leviathans seek free rein, the country’s external heft flows directly from its strategic projection and the future promise of its markets.

If growth stalls, the country is less likely to be viewed in the region and further afield as a natural foil to China, or in economic terms as the next China.

Bear in mind that these perceptions lay at the heart of the US’s re-engagement with India, beginning with the nuclear initiative under the second President Bush.

If America decides now that India “has been over-sold”, as some observers in Washington are beginning to say, there will be a diplomatic cost.

India may no longer get carve-outs from sanctions regimes, and other countries may not automatically take India at its word, in the face of Pakistan’s protests, on the Kashmir issue.

Meanwhile, the defence forces lose out relatively because there isn’t enough money for the acquisition of submarines and destroyers while China’s navy expands at a frenetic pace and expands its presence in the Indian Ocean. That reduces India’s utility as a strategic partner.

On top of this, if our businessmen, ever in search of protective tariff walls, persuade a naturally nationalist government to stay out of the mega-trade deal that is the RCEP (Regional Comprehensive Economic Partnership), then India will have turned its back on the most dynamic part of the world economy.

On its part, the government seems to have decided that “Make in India” will work only by aiming at import substitution -- which usually translates into higher tariffs.

If the history of world trade and economic performance (and India’s own policy-making history) says anything at all, it is that this strategy does not work in the long run.

All of this makes it compelling that the key personages in the government, and that includes the prime minister, engage directly and actively to prevent the current downturn from morphing into 1980s-level growth rates.

Modi in particular needs to put aside his lack of engagement with macro-economic policy, and develop a coherent understanding of how the different elements of a revival strategy (different from a “package” of announcements) mesh together -- and then to stay the course on what is required to be done, because structural issues don’t change with the season.