'There is a sincere intent on the part of the policy makers, regulator and the industry to revive the sector.

'The plans, however, seem to be addressing some aspects and missing in comprehensiveness.

'The government should seriously contemplate a gradual reduction of the ownership and management of public sector banks,' says Ashvin Parekh. 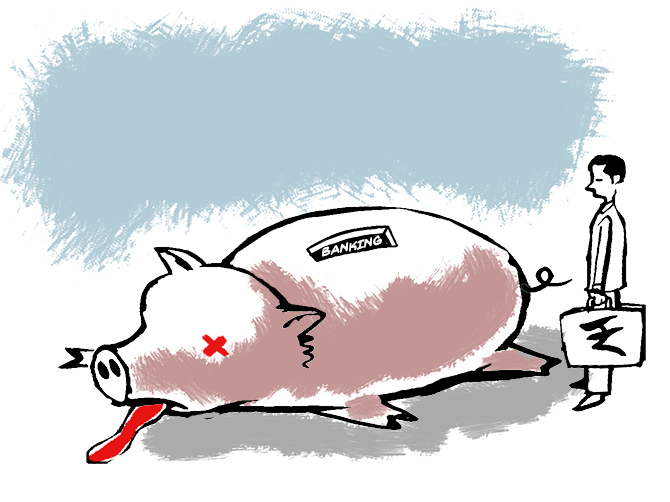 There is a sombre feeling for our economy generally and particularly for our banking industry.

As we understand, the intent to make the industry healthy again seems to be there.

Industry experts, leaders, policy-makers and the regulator have, for the last one decade, been assuring us that the core issues are being addressed and recovery is on its way.

So where exactly is the shoe pinching?

There are several challenges that need to be addressed.

The core ones include the productivity of the banking sector with the public sector banking companies facing a larger challenge.

On quantitative and qualitative parameters, the sector is witnessing a gradual decline.

The banking sector is losing its market share in the mobilisation of household savings.

Unfortunately, the market share has been wrested largely by the mutual fund industry.

The household savers carry market risk in their portfolios sans the ability to understand.

The substantial loss of market value of retail investors arising out of market volatility, particularly in the past one month, suggests structural issues that are deep-rooted.

Perhaps policy-makers will one day realise the impact of the disintermediation of the banking industry vis-a-vis household wealth.

The past five years have seen a deep decline.

The second factor is governance.

Its order has grown weaker, both in public sector and private sector banking.

The slowing of the economy has contributed vastly to the non-performing assets (NPAs) of the banking industry and there is a mixed feeling about recovery.

The woes of the aviation sector and the challenges of the energy and telecom sectors do not provide much comfort to the bankers.

Then there are issues of transmission of rate cuts, where the monetary policy expectations of the regulator and the policy makers from the banking sector seem unrealistic.

A nearly-dead horse is being pushed to rise and push the economy, perhaps without adequate fiscal measures or support.

Where are we going wrong? Is there a dearth of reforms?

The answer is obvious: There have been many reforms in the past 10 years. Consolidation of banking was discussed in 2004-05.

It happened only in 2018, when the benefits of consolidation were vastly diluted.

The regulations and measures to address NPA challenges, ranging from announcing borrowers as defaulters and withdrawing further support, S4A, SDR did not draw much success during the 2012-17 period.

The statutory intervention through the NCLT process and the IBC Code seemed promising, but the desired outcome is still eluding us.

The record of actual recovery has been fairly poor, despite the empowerment rendered to the bankers.

The regulator and the banking industry were expecting to recover almost Rs 2 trillion by 2018, and another Rs 2 trillion in 2019.

The average haircuts picked up by the financial lenders were expected to be around 50 per cent.

Most resolutions so far have had a much larger order of haircuts.

Then there were so many other programmes designed by the policy makers -- the Gyan Sangam, the Indradhanush, and now Utkarsh 2020 -- in consultation with the regulators and the industry.

These programmes appeared so impressive, giving us a hope that the banking system has analysed the issues confronting it and that recovery is around the corner.

This has not materialised.

In the midst of all this, one thing stands out clearly.

There is a sincere intent on the part of the policy makers, regulator and the industry to revive the sector.

There are plans as well.

The plans, however, seem to be addressing some aspects and missing in comprehensiveness.

Each of the reforms mentioned above has faced many challenges in execution -- whether it is the insolvency code or the formation of a Bank Board Bureau.

When the reforms are executed, we realise that we had, perhaps, not examined all the factors at play.

The core issues including reorientation of human resource, motivating bankers to take decisions and providing a fear-free environment of working for the bankers is essential.

Acceptance of the hard reality of the adverse economic conditions and its implications to the borrowers is essential.

In conclusion, there is a serious need to strengthen the governance of the banking sector and align the fiscal, regulatory and legal measures to revive the banking system.

The government should seriously contemplate a gradual reduction of the ownership and management of public sector banks.

Aazad returns to Jama Masjid; says fight will go on

Bengaluru: 6 from SDPI held for attack on RSS member