News
Business
Movies
Sports
Cricket
Get Ahead
Money Tips
Shopping
Sign in  |  Create a Rediffmail account
Rediff.com  » Business » Will GST manage to live up to expectations?

As and when the GST comes in, Budget projections will have to be unbundled and revised. In fact, the pragmatic decision would be to present another Budget! This makes the passage of the Finance Bill with its multiple unrelated amendments seem even more dubious, says Devangshu Datta. 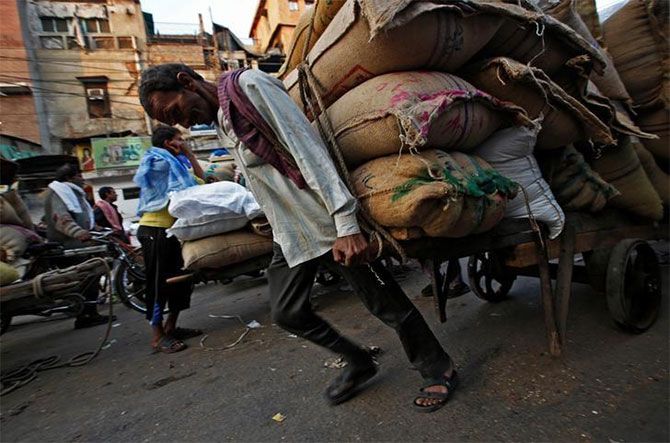 Traders around the world were focused on political and geopolitical news flow through the past fortnight.

The Finance Bill was bulldozed through Parliament as a Money Bill, with umpteen interpolated amendments pertaining to other laws.

In the US, Trump’s first attempt to replace Obamacare failed to pass legislative muster. The UK moved a significant step closer to Brexit.

The goods and services tax (GST) also moved closer to implementation. The devil here is going to be in the details.

The GST Council must now decide on the rules, processes and rates  of the new indirect tax regime. There is a fair chance the GST will be in place by July 1- significant slippages from deadline look unlikely.

As and when the GST comes in, Budget projections will have to be unbundled and revised. In fact, the pragmatic decision would be to present another Budget! This makes the passage of the Finance Bill with its multiple unrelated amendments seem even more dubious.

The market is, of course, happy that the GST is going through. But, given a multitude of complex rates, and a processing system where state and central officers are both involved, the chances of chaos are high.

Going by GST implementation experiences in the European Union, confusion through the first year is likely.

In theory, once things settle down, GST should help integrate India as one market with fewer interstate barriers.

The Economic Survey carried data (Chapter 11) on interstate trade and pointed out that interstate trade is already high. In practice, therefore, the benefits from GST may not quite live up to the high expectations.

The eurozone is also due for some chaos. The UK’s exit will have an impact and currency markets are bouncing. Sterling has hardened after being weak for months.

As the UK embarks on its two-year journey out of the EU, the euro could start bouncing around. The European Central Bank (ECB) has started to taper its bond-buying programme to euro 60 billion per month from the earlier euro 80 billion per month.

EU Inflation is also rising. It was at about two per cent and ECB President Mario Draghi may soon have to consider hiking rates (the euro policy rate is negative).

In fact, inflation is making a global comeback. The UK now has consumer inflation rising at 2.3 per cent - well above the Bank of England’s two per cent target.

US inflation is also edging above the Federal Reserve’s target of two per cent. The latest American Personal Consumption Expenditures Price Index (PCE) hit 2.1 per cent year-on-year in February.

There is speculation that this could result in the Fed raising rates at least thrice in 2017.  Given that other US data looks strong, markets shrugged this off (along with Donald Trump’s failure to push through health care change).

This may have been partially inspired by the financial year ending, but it was more than enough to absorb significant domestic institutional selling of over Rs 4,300 crore. The market ignored Reliance Industries being fined a significant amount in the Reliance Petroleum case.

The major market indices are all up. The Nifty has gained over 12 per cent since January 1, 2017, and has hit a sequence of successive highs. In terms of sectors, the biggest positive mover in the last month has been the realty index, which is up by over 10 per cent in the last 20 sessions.

Interestingly, the European (and US) tech indices are  strongly up in the last month but India’s IT index is flat. The FPI buying has pushed the rupee back up till the Rs 64.85/USD mark. A stronger rupee could start impacting exports, though the USD has also lost ground against other currencies.

One inevitable fallout from the strong secondary market has been a revival of enthusiasm in the primary market. There are likely to be many initial public offerings (IPO).

Despite low demand for bank credit, companies will raise cheap funds via the IPO route. Even if no immediate requirements exist, cheap cash is always welcome.

Technically speaking, the market looks as though it could continue to run up until further notices. However, valuations are pretty stretched and any corrections could be sudden and deep.