Teenage strike Neymar scored twice on his third appearance for Brazil as the South Americans outclassed Scotland 2-0 in a friendly played in something of a carnival atmosphere at Arsenal's Emirates Stadium on Sunday.

The 19-year-old curled in a cool goal after 42 minutes and a penalty after 77 as Brazil overwhelmed their British opponents on a sunny afternoon in front of 53,082 fans in London.

Having lost their last two friendlies to Argentina and France and with an eye on the Copa America in July, Brazil looked for easier opposition to avoid a hat-trick of defeats.

In Scotland, who they had beaten seven times and drawn with twice in their previous nine games, they had the ideal victims for their 19th friendly on neutral soil in the last five years. 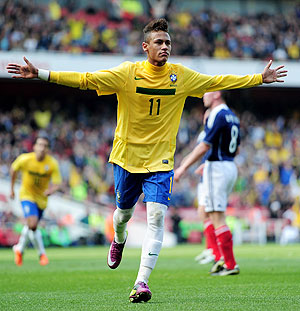 The five-times world champions, without strikers Alexandre Pato and Nilmar through injury and Ronaldinho through non-selection, handed a debut to Leandro Damiao.

He clipped the bar with an early header following a prodigious leap but it was his strike partner Neymar who caught the eye and not just for his 10cm-high Mohican haircut and his glossy purple and lime green boots.

From the start he was keen to display his collection of flicks, feints and clever turns but his tiny teenage frame found things hard going in the face of some determined and sturdy Scottish defending.

Something of an amalgam of Didier Drogba and Cristiano Ronaldo, his theatrical responses and sulky indignation quickly established him as the villain in the eyes of the Scotland fans.

However, his face lit up three minutes before halftime after breaking the deadlock.

Andre Santos advanced up the left and found Neymar in an unforgivable amount of space on the edge of the box. He took a touch to kill the ball then stroked it round a defender and beyond goalkeeper Allan McGregor, quickly following with an extended jig in the company of half a dozen team mates.

It was the least Brazil deserved after dominating possession in a one-sided half.

Lucio, out of favour since the team he captained in the 2010 World Cup were knocked out in the quarter-finals by Netherlands, could not have asked for a more comfortable return as the centre back and goalkeeper Julio Cesar barely broke sweat despite the unseasonable sunshine.

Within seconds of the restart, Neymar burst through the Scottish defence and grazed the bar with a fizzing 25-metre shot, McGregor had to make a scrambling double save and Ramires blazed horribly over the bar from 10 metres.

Scotland finally forced a corner after an hour, greeted with delirium by their success-starved fans, but in keeping with the gulf in class, Charlie Adam's flag kick barely left the ground.

Coach Mano Menezes handed another debut to the highly rated 18-year-old Lucas, who teamed up with Neymar to such devastating effect to help Brazil win the South American under-20 championship last month.

His first touch sent Neymar into the box and when his dummy led to him being tripped by Adam, Neymar got up to stroke home the penalty.

Lucas gave a glimpse of his talent with two scintillating runs in the dying minutes, the second of which handed fellow substitute Jonas a glorious chance for the third goal, which he blasted high over the bar.

© Copyright 2022 Reuters Limited. All rights reserved. Republication or redistribution of Reuters content, including by framing or similar means, is expressly prohibited without the prior written consent of Reuters. Reuters shall not be liable for any errors or delays in the content, or for any actions taken in reliance thereon.
Related News: Neymar, Brazil, Scotland, Allan McGregor, Lucas
COMMENT
Print this article