IMAGE: World No 41 Achanta Sharath Kamal is the lone Indian in the competition. Photograph: Thomas Peter/Reuters

Veteran Sharath Kamal finally made the men's singles medal round in a major championship when he entered the semi-finals of the WTT Contender Doha in Doha on Wednesday.

However, Sathiyan and Manika Batra combined well to reach the final of the mixed doubles. The pair, ranked No. 7 in the world, accounted for Hong Kong's Wong Chun Ting and Doo Hoi Ken 3-2.

The error-prone Croat, just a place ahead of Sharath in the world rankings, failed to contend with the Indian onslaught in the quarter-finals.

The closest he came to Sharath was in the first game in which he managed eight points, and one less in the second. However, in the third, Sharath ran into a sizable lead and maintained it throughout to win it in style.

In the semi-finals, Sharath will take on Chinese Yuan Licen, who is ranked 264. But it was the same Chinese who accounted for Sathiyan on Monday when he decimated the Indian 11-5, 11-6, 14-12.

Other men's paddlers that could not make it to the main draw of the men's singles included Manav Thakkar, Harmeet Desai, SFR Snehit and Mudit Dani.

The win in the semifinals by the mixed duo against the world No. 4 pair was indeed creditable, particularly after the way the Indians kept their hopes alive when the Hong Kong pair levelled the score 2-2, taking the issue to the decider.

In the women's singles, Manika Batra tasted defeat in the first round of the main draw, bowing out to Chinese Fan Siqi 7-11, 5-11, 6-11. Ranked 81, the Chinese proved to be a tough nut to crack for the 48th ranked Indian.

Among the women paddlers, except for Archana Kamath and Sutirtha Mukherjee, all others folded in earlier rounds, including Sreeja Akula, Krittwika Sinha Roy and Prapti Sen.

Competing for the first time since the Olympic Games in Tokyo last year, a languid Sable (Maharashhra) stayed on the heels of Balkishan (Haryana) who set a good pace from the start. The Olympian shifted gears with three laps to go and came home in 8:16.21, shaving off 1.91 seconds from his own record set in Tokyo.

Trailing Kerala team-mate Abdulla Aboobacker until the midway stage of the men's triple jump competition, Eldhose Paul came up with a personal best effort of 16.95m to claim gold.

Kamalpreet Kaur had two throws past the 60m mark, with her sixth and final effort producing the best result for her. Having got to 60.15m on her third attempt, the winning distance of 61.39m will give the confidence, going into a busy year in which the World Championships, Commonwealth Games and Asian Games dot the calendar.

There seems to be no stopping Priya H Mohan rise as the best women's 400m sprinter. She beat the vastly experienced MR Poovamma to second place yet again.

Jisna Mathew strained her every sinew to claim the bronze medal on a day when Karnataka's NS Inchara dipped home inside 54 seconds for the first time and beat VK Vismaya in the process.

Priya Mohan clocked a personal best time of 52.37 seconds, a 0.21-second improvement over her previous best secured in the Inter-University Championships in Bhubaneshwar last month.

Poovamma made the most of the younger runner's pace and came up with her fastest time since winning a race in Bydgoszcz in Poland in 52.31 seconds on June 24, 2016.

The men's quarter-mile produced some sparks as well with 21-year-old Rajesh Ramesh (Tamil Nadu) stunning Kerala's Noah Nirmal Tom with a burst of speed on the home stretch. Rajesh Ramesh finished in a personal best time of 46.09 seconds, improving on the 46.35 that he clocked in finishing third in the Indian Grand Prix 1 on March 13.

India's youngest Grandmaster D Gukesh suffered a shocking defeat at the hands of unheralded Ranindu Liyanage of Sri Lanka in the second round of 19th Delhi International open chess tournament in New Delhi on Wednesday.

For Gukesh it was simply a bad day in the office when nothing worked right. Playing the black side of a French defense, the Indian held a comfortable position but it was not easy to convert into a full point.

As the pieces changed hands at regular intervals, Gukesh found the going tough as he kept looking for an elusive victory.

Liyanage kept himself in the game by keeping the position quiet for a long time and later launched an offensive through a rook invasion on the seventh rank in the rook and minor piece endgame. The Sri Lankan got a dangerous passed pawn on the queen side that netted him a full piece and it was all over soon.

Gupta was held to a draw by former national women's champion Padmini Rout. Rout had to part with a piece for a couple of pawns out of a London system game as black but her never-say-die approach paid off handsomely in the end.

Gupta missed one chance at a crucial juncture and did not get any clear opportunity thereafter despite the extra material. The game was drawn when Gupta decided he could no longer make any headways.

The Delhi open is being played under FIDE's Swiss rules and there are eight rounds still remaining in the Rs 25 lakh prize money tournament. 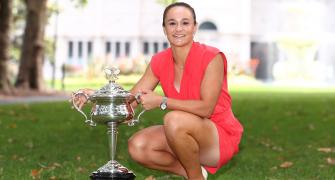 World No 1 Barty retires from tennis at 25 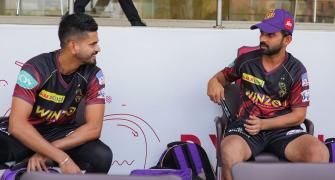