IMAGES from soccer matches played across Europe on Saturday. Juan Cuadrado scored twice as Juventus kept their Champions League qualification hopes alive with a 3-2 "Derby of Italy" victory over Serie A champions Inter Milan on Saturday despite spending most of the second half with 10 men.

The result lifted Andrea Pirlo's side into fourth place with one game remaining, level on 75 points with AC Milan in third.

However, Napoli will knock the Turin club back into fifth if they beat Fiorentina on Sunday and Milan will be assured of a top-four finish if they beat Cagliari, thanks to their better head-to-head record against Juve.

"It was a difficult game against a great team like Inter. Even with a man down, we had to get the job done, make sacrifices, and I think that we got the result as a team," Cuadrado told Sky Italia.

Both sides were awarded first-half penalties in a game dominated by VAR decisions. Cristiano Ronaldo scored on the rebound to put Juve ahead after his spot-kick was saved, and Romelu Lukaku scored his penalty for Inter soon after. Juve regained the lead on the brink of halftime through a deflected Cuadrado strike, but the hosts were reduced to 10 men early in the second half when Rodrigo Bentancur picked up a second yellow.

Inter drew level through a Giorgio Chiellini own goal and Cuadrado responded with the winning penalty in the 88th minute. There was still time for Marcelo Brozovic to be sent off for the visitors for a second booking.

Inter ended Juve’s nine-year stranglehold of the Serie A title with four games to spare and had the chance to land a huge blow to their rivals' top-four hopes.

But Juve took the lead when Chiellini was wrestled to the ground at a corner and won a penalty following a VAR review. The spot-kick was saved, but Ronaldo tapped in the rebound.

Inter drew level when Matthijs de Ligt was judged to have fouled Lautaro Martinez in the box after a VAR review, and Lukaku converted the resulting penalty.

Juve edged back in front deep in first-half stoppage time when a powerful Cuadrado shot took a deflection and flew past Handanovic.

The hosts were reduced to 10 men on the 55th minute after Bentancur tripped Lukaku to earn a second yellow, and Pirlo decided to take Ronaldo off for the final quarter of the match in a bid to see out the game.

The match burst into life in the final 10 minutes. Chiellini bundled a cross into his own net but the goal was disallowed for a foul, only for the decision to be overturned following a VAR review.

Three minutes later, Cuadrado was tripped by Ivan Perisic to earn the third penalty of the game and the Colombian slotted it home before Inter’s night got worse when Brozovic picked up a second yellow for a clumsy challenge. Bayern Munich striker Robert Lewandowski on Saturday equalled Gerd Mueller's 49-year-old German league goal record when he scored with a 26th minute penalty in their 2-2 draw at Freiburg to take his season tally to 40 goals.

The Poland striker, who netted for the 11th straight game in all competitions and could have scored more, is already second on the all-time scorers list in the Bundesliga, with 276 goals, behind only Mueller's 365. He has one more chance to break Mueller's 1971/72 record, with one game left in the season.

"This is a great honour for me and also for the modern history of the Bundesliga in Germany," Lewandowski said. "I am very happy to be part of this legendary record."

The forward had paid tribute to Gerd Mueller, revealing a shirt under his top with a picture of Mueller and the writing "4ever Gerd" on it, after scoring his goal.

"What Gerd managed to achieve was amazing. I never thought I could come close and share a record with him," Lewandowski said. "I am very, very proud. I still cannot believe what has happened. I will need some time to realise it."

The Bavarians, who have already secured their ninth consecutive league crown, had their first good chance in the 20th minute when Lewandowski's shot from the edge of the box sailed wide.

He did it much better six minutes later, sending keeper Mark Flekken the wrong way to equal the record.

Freiburg levelled three minutes later with Manuel Gulde's header, but the Bavarians went back in front with Leroy Sane sliding in to connect with a Thomas Mueller cutback in the 53rd.

Lewandowski missed a chance in front of goal in the 78th minute and also had an 83rd minute header saved by the keeper after Christian Guenter had drawn the hosts level.

But the result will matter little on the day as Lewandowski was showered with praise, with the German Football League (DFL) hailing it as an "historic" achievement.

"Almost half a century after the unique Gerd Mueller set the record, Robert Lewandowski equalled it today," the DFL said. "Congratulations for this outstanding and historic performance."

Bayern play Augsburg in their final game of the season next week. Champions League hopefuls Eintracht Frankfurt crashed to a 4-3 defeat at relegated Schalke 04 on Saturday to all but dash their hopes of a top-four finish with one game left in the season.

Eintracht are in fifth place on 57 points, with Borussia Dortmund fourth on 58 and in action against Mainz 05 on Sunday. A win would see them secure fourth place before the final matchday.

Eintracht battled back after Klaas-Jan Huntelaar had put the hosts in front in the 15th minute, scoring on the rebound after his penalty was saved.

Andre Silva levelled in the 29th and Evan Ndicka put them 2-1 up six minutes after the restart.

But Schalke, in last place, struck three times in 12 minutes through Blendi Idrizi, Florian Flick and Matthew Hoppe to turn the game around.

Portuguese Silva struck again to set a club record with a his 27th league goal in the season, one better than Bernd Hoelzenbein's 1976/77 run, but it was not enough as Schalke's win boosted their Ruhr valley rivals' chances of a fourth-place finish. 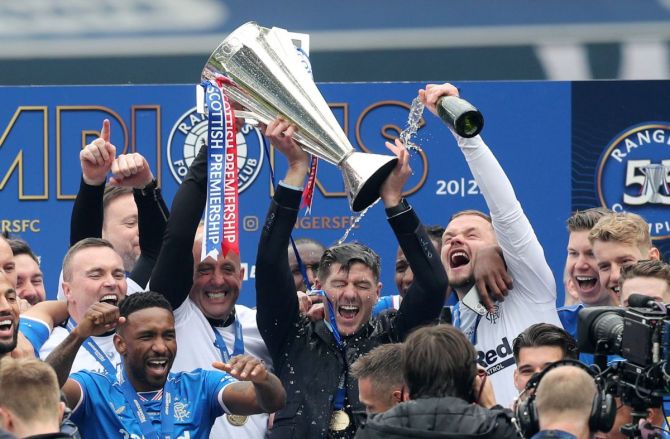 Steven Gerrard's Rangers side became only the second team to win the Scottish Premiership and go a full season without losing a game after the champions beat Aberdeen 4-0 at home on the final day on Saturday.

Rangers won all 19 of their home games at Ibrox and equalled the league record of 26 clean sheets in the campaign. They also set a record by conceding only 13 goals in their 32 wins and six draws.

Celtic, the first side to go unbeaten in the 2016-17 season, finished 25 points behind Rangers, who sealed the title in March to deny their arch-rivals a 10th straight title.

"It feels good, it's been a while since I've had the smell of champagne... I'm actually enjoying it," Gerrard told Sky Sports after he was soaked in champagne by Rangers striker Alfredo Morelos.

"I was asked to come here at a really difficult time... It was about having a vision, having the right people in the right places, the right support from the board. We fought every day for three years to get to this point."

Although fans are not allowed inside the stadium due to COVID-19 restrictions, many gathered outside with banners and blue flares to celebrate their 'Invincibles' campaign. IMAGE: Pedro celebrates scoring the second goal for AS Roma against Lazio in the Serie A match in Rome. Photograph: Paolo Bruno/Getty Images

A long-range screamer from AS Roma substitute Pedro crowned a 2-0 Rome Derby win on Saturday that mathematically ended Lazio’s hopes of a top-four finish in Serie A.

Lazio have another two games to play before the season ends next Sunday, but the sixth-placed side are eight points behind Juventus in the fourth and final Champions League place.

Roma are six points behind Lazio in seventh place and can finish no higher, but they moved five points clear of Sassuolo, who face Parma on Sunday.

Lazio started the stronger as Luis Alberto had a shot well saved by young goalkeeper Daniel Fuzato and Vedat Muriqi’s well-taken finish was ruled out for offside.

But Roma went ahead shortly before halftime when Edin Dzeko skipped past Lazio defender Francesco Acerbi to the byline and cut a pass back to Henrikh Mkhitaryan for a simple finish.

Pedro doubled their lead on the 78th minute with a superb individual goal as he dribbled past two defenders and fired a swerving shot into the bottom corner from outside the area.

Lazio’s night got even worse late on when Acerbi was shown a second yellow card for a shirt pull on Dzeko.

Atalanta secured Champions League qualification for a third consecutive season with a 4-3 win over Genoa on Saturday that left the Bergamo club second in Serie A.

Gian Piero Gasperini’s side have 78 points, six more than fifth-placed Juventus who have two games remaining, but they are guaranteed to finish ahead of the Turin club thanks to a better head-to-head record.

Atalanta will finish as runners-up in Serie A if they beat Milan at home on the final day of the season next Sunday, marking their highest finish ever.

Before then, Gasperini has the chance to win his first trophy as coach and guide Atalanta to their first Coppa Italia triumph since 1963 when they face Juventus in the cup final on Wednesday.

Duvan Zapata, Ruslan Malinovskyi and Robin Gosens were on target to give the visitors a comfortable lead by halftime against 14th-placed Genoa, who have already secured survival.

The hosts improved after the break as an Eldor Shomurodov strike and Goran Pandev penalty either side of a neat Mario Pasalic finish reduced the deficit, but Shomurodov’s second goal of the afternoon came too late as Genoa fell just short of an unexpected comeback.

Elsewhere, Spezia secured their Serie A safety with a 4-1 win against fellow strugglers Torino.

The Ligurian club, who were promoted to Serie A for the first time last season, were 2-0 up at halftime thanks to a Riccardo Saponara strike and M’Bala Nzola penalty.

Andrea Belotti pulled one back from the spot for Toro early in the second half, but an Nzola volley and Martin Erlic header secured a comfortable win.

Spezia are 15th with 38 points, seven clear of 18th-placed Benevento on 31 points, but Torino are still at risk after a miserable week.

Davide Nicola's side were thrashed 7-0 by Milan on Wednesday and have 35 points, but they have two games left, the first at Lazio on Tuesday.

Benevento have a chance to cut the gap to one point when they host relegated Crotone on Sunday, before a potentially decisive final-day meeting against Torino next Sunday.

© Copyright 2021 Reuters Limited. All rights reserved. Republication or redistribution of Reuters content, including by framing or similar means, is expressly prohibited without the prior written consent of Reuters. Reuters shall not be liable for any errors or delays in the content, or for any actions taken in reliance thereon.
Related News: Robert Lewandowski, Steven Gerrard, Gerd Mueller, Eintracht Frankfurt, Atalanta
SHARE THIS STORYCOMMENT
Print this article