What Lewandowski Gifted A Saudi Fan Robert Lewandowski gifted a signed jersey on Sunday to a Saudi Arabia fan who celebrated the Poland striker's first ever World Cup goal by changing his jersey and breaking into a dance in the stands during the FIFA World Cup match at the Education City stadium on Sunday.

The fan swapped his Saudi Arabia shirt for a Polish one with Lewandowski's name on the back after the striker had scored his first World Cup goal.

'When you swap the Saudi Arabia shirt for the Polish national team shirt with the name of Robert Lewandowski during the match', the Polish Football Association tweeted. Even though his team lost to Poland, the Saudi fan was in for the surprise of his life as he not only got to meet Lewandowski, but also received an autographed jersey and a hug from the Barcelona striker at the team hotel in Doha.

After years of scoring goals for his old club Bayern Munich and now Barcelona, Lewandowski, one of the world's finest strikers, finally found his target for the first time in a World Cup.

Poland need a draw in their final game against Argentina -- which features the incomparable Lionel Messi -- on Wednesday to guarantee themselves a spot in the round of 16. 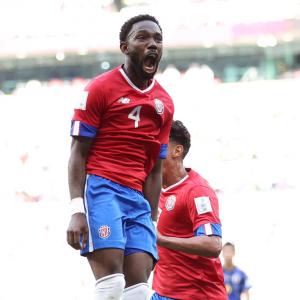