A round-up of Saturday's action in La Liga, Ligue 1 and Serie A. Lionel Messi scored two exquisite free kicks as he netted his first hat-trick of the season in a 4-1 win over Celta Vigo at the Camp Nou on Saturday which took Barcelona back to the top of La Liga after a difficult week.

Barca's captain coolly converted a penalty to put the champions ahead in the 23rd minute but gave away a foul in a dangerous area which led to Lucas Olaza levelling for Celta with an outstanding strike from a free kick in the 42nd.

But Messi restored Barca's lead right before halftime with a stunning free kick of his own, curling the ball into the top corner.

He conjured up an almost identical strike at the start of the second half to complete his treble and match Cristiano Ronaldo's record of 34 hat-tricks in Spain's top flight. Sergio Busquets struck a fourth goal in the 85th to round off a first win for Barca in three games, after falling to a shock 3-1 defeat at Levante last week in La Liga and drawing 0-0 at home to Slavia Prague in the Champions League.

"We have a very big advantage, we have the best player in the world on our side who is also the best at taking free kicks," said Busquets in praise of Messi.

"Little by little he has been improving at free kicks, he used to find them hard. Having him around gives us a real boost."

Barca lead the standings on 25 points after 12 games, level with second-placed Real Madrid who eased to a 4-0 win at Eibar.

Despite going into the weekend within striking distance of top spot, the Catalans have had an uneasy campaign which hit a new low this week as players were booed off the pitch following the goalless draw at home against Slavia.

There was a subdued atmosphere at the Camp Nou on Saturday and close to 30,000 seats were left empty.

The visitors did well to contain Barca in the opening stages until Messi took advantage from the penalty spot but howls of frustration could be heard across the ground after Olaza's superb equaliser.

Real Madrid too good for Eibar 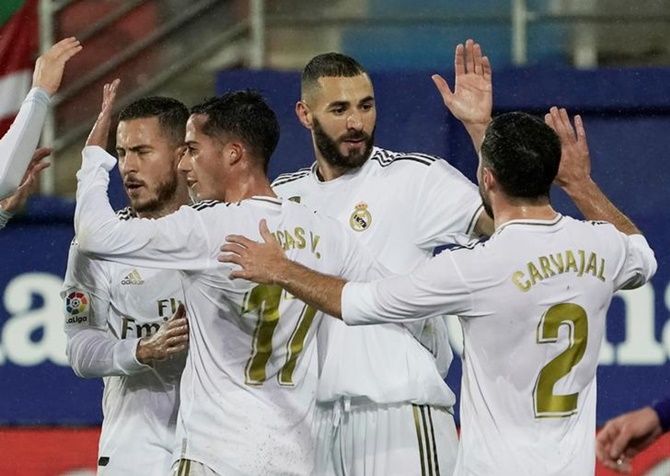 Karim Benzema struck twice as Real Madrid continued their sparkling run of form by coasting to a 4-0 win at Eibar on Saturday thanks to a rampant first-half display.

Benzema got Zinedine Zidane's side off to a comfortable start in the torrential rain at Eibar's compact Ipurua stadium, knocking a loose ball into the net in the 17th minute after it had been sprayed across a crowded penalty box.

Real quickly extended their lead with a penalty from Sergio Ramos in the 20th after Eden Hazard had been tripped.

They earned another spot-kick when Lucas Vazquez was felled and Benzema took the ball and calmly tucked it home to net for a fourth time in two games after his brace in Wednesday's 6-0 rout of Galatasaray in the Champions League.

Real were not as ruthless in the second half but still managed to stretch their lead in the 61st minute when Luka Modric teed up Uruguayan midfielder Federico Valverde, who scored his first goal for Real.

The victory briefly took Zinedine Zidane's side top of the standings on 25 points after 12 games but Barcelona went ahead of them on goal difference after a 4-1 win at home to Celta Vigo.

Real Sociedad are third on 23 points after drawing 1-1 at home to Leganes on Friday, although Barca and Real each have a game in hand on the Basque side.

"We have been producing very complete performances recently and today was another one," said Real defender Dani Carvajal.

"Our start set the tone for the game and we have to keep that up, unfortunately the international break comes at a time when we are doing very well."

Real had harrowing memories of their last trip to Eibar, when they were overpowered 3-0 last November in a game that spelled the beginning of the end for coach Santiago Solari.

Things could hardly have been more different this time -- Real were insatiable in the first half as Valverde provided relentless energy through the middle and Hazard looked at his most dangerous since his summer move from Chelsea.

Real have now scored 16 goals without conceding any in their last five fixtures, a resounding response to their shock 1-0 defeat at Real Mallorca three weeks ago. Mauro Icardi struck a late goal five minutes after coming on as a substitute to give Paris St Germain a 2-1 Ligue 1 win at Brest in windy conditions on Saturday as they bounced back from their loss to Dijon.

The Argentine forward, on loan from Inter Milan, was quickest to react as Brest failed to clear the ball and scored with a shot into the top corner in the 85th minute for his ninth goal in 10 games in all competitions for PSG.

The win lifted the leaders and champions up to 30 points from 13 games, nine ahead of Angers who drew 0-0 at Reims in a later game. They are followed by five teams on 19 points -- Lille, Girondins de Bordeaux, Nantes, Reims and Olympique de Marseille.

"It was not easy with the wind against us in the first period, we lacked precision and we made mistakes," said PSG coach Thomas Tuchel.

"We controlled the second half, it was easier with the wind in our backs but we gave them an opportunity and they scored. We reacted well and we continued to play."

PSG goalkeeper Sergio Rico turned away a curling effort from Mathias Autret and had a lucky escape when he sent a clearance straight to Yoann Court whose first-time shot bounced wide of the post.

Court missed another chance by sending his shot into the side-netting.

PSG made the most of their luck by taking the lead in the 39th minute although they had VAR to thank.

Julien Draxler's through ball found Angel Di Maria who sped away from his marker and dinked the ball over Gautier Larsonneur, the linesman raised his flag but the decision was overturned two minutes later by VAR and the goal awarded.

Rico made another good save in the second half to deny Romain Perraud before substitute Samuel Grandsir scored a deserved equaliser for Brest as PSG were caught on the break.

Tuchel threw on three substitutes in the 80th minute, with Icardi replacing out-of-sorts Edinson Cavani, and was quickly rewarded.

Angers held on for a point at Reims despite having Angelo Fulgini sent off for a second bookable offence with 20 minutes left. The match between Lille and Metz also ended goalless. 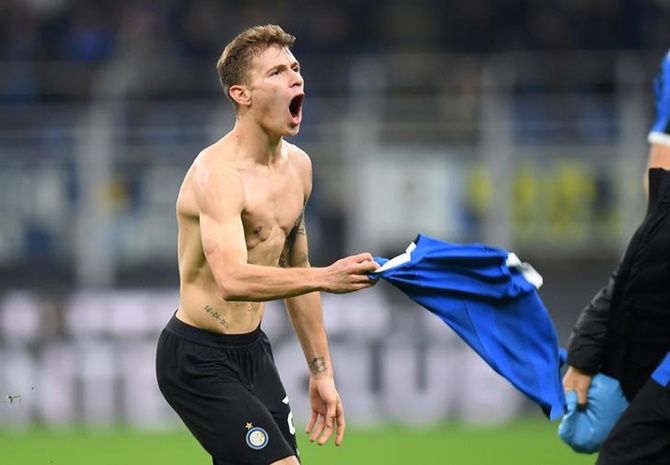 Inter Milan were rewarded for a relentless second-half performance when a magnificent strike from Nicolo Barella gave them a 2-1 win over Verona after the visitors had taken a shock first-half lead in Serie A on Saturday.

Barella collected the ball on the left, cut inside and curled the ball into the far corner from the edge of the area for his first goal Serie A goal since joining Inter from Cagliari at the start of this season.

Inter, who blew a 2-0 lead and lost 3-2 to Borussia Dortmund in the Champions League on Tuesday, went back to the top of Serie A with 31 points from 12 games, two ahead of Juventus who host AC Milan on Sunday.

It was Inter's seventh game in 20 days -- something coach Antonio Conte has complained bitterly about, saying his squad does not have enough strength in depth for such an intense fixture list.

"We gave an important response against a team which defends man to man over the whole pitch," said the former Juventus, Chelsea and Italy coach.

"We've faced these 20 days with strength and intensity. I congratulate the lads, who found the strength to react, learned the lesson and had Verona on the ropes for the whole game."

Inter gave away a penalty in the 19th minute when goalkeeper Samir Handanovic caught Mattia Zaccagni as he raced through and Valerio Verre made no mistake from the spot.

The hosts dominated the game and Marcelo Brozovic clipped the crossbar before Verona goalkeeper Marco Silvestri managed to turn Vecino's shot off the line at point-blank range just before the break.

Inter's furious assault continued after the break and the pressure finally paid off in the 65th minute when Vecino headed in from a Valentino Lazaro cross.

Verona's Sofiane Amrabat gifted Inter a glorious chance by hoofing the ball back towards his goal from the halfway line and straight into the path of Romelu Lukaku. The Belgian, however, misjudged the bounce and sent a weak header straight into Silvestri's arms.

Lukaku's blushed were spared by Barella's strike, the midfielder also earning a yellow card for taking his shirt off and throwing it to the ground as he celebrated.

In the earlier game, Brescia's new coach Fabio Grosso had a nightmare debut as his side were thumped 4-0 at home by Torino.

Andrea Belotti converted penalties in the 17th and 26th minute, both awarded for handball, to put Torino in charge and Brescia's problems increased with a red card for Ales Mateju before halftime.

Brescia forward Mario Balotelli was substituted at the break to make way for defender Bruno Martella and Alex Berenguer piled on the misery for the hosts with two goals in a five-minute spell late in the game.

Napoli's problems continued when they were held to a 0-0 draw at home by Genoa in a tense atmosphere and jeered off the field on Saturday following a tumultuous week at the Serie A club.

The San Paolo stadium was barely one third full on a damp evening after a week in which the team defied orders from club owner Aurelio De Laurentiis confining them to a training retreat.

Players were greeted with insults as they warmed up on the pitch and there was near silence when the stadium announcer read out the Napoli line-up before the game.

Napoli, runners-up in three of the last four seasons, stayed seventh on 19 points, 12 behind leaders Inter Milan, after extending their winless run to five matches in all competitions, although four of those have been draws.

Napoli coach Carlo Ancelotti and his players did not give any post-match interviews as the squad continued a media silence.

Lorenzo Insigne thought he had put Napoli ahead after two minutes but Hirving Lozano was ruled offside in the build-up. After that, it was a lacklustre display from Napoli which further angered their supporters.

Napoli defender Kalidou Koulibaly prevented it from being worse for the hosts with a miraculous clearance off the line from Andrea Pinamonti's point-blank shot in the second-half.

Napoli nearly grabbed a late winner but substitute Elif Elmas's header was clawed away by Genoa goalkeeper Ionut Radu and, predictably, the final whistle was greeted with a chorus of jeers from the stands.

© Copyright 2021 Reuters Limited. All rights reserved. Republication or redistribution of Reuters content, including by framing or similar means, is expressly prohibited without the prior written consent of Reuters. Reuters shall not be liable for any errors or delays in the content, or for any actions taken in reliance thereon.
Related News: Napoli, Paris St Germain, Celta Vigo, Barca, Lionel Messi
SHARE THIS STORYCOMMENT
Print this article It will be Prithvi 2.0 now, says comeback man Shaw 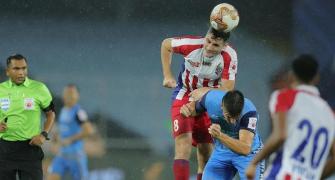 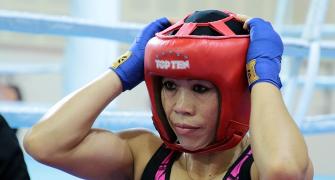 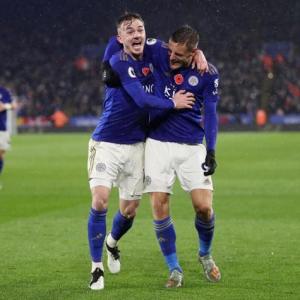 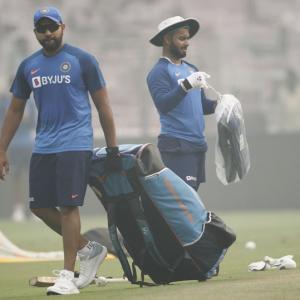