Images from Saturday's matches in the Premier League. 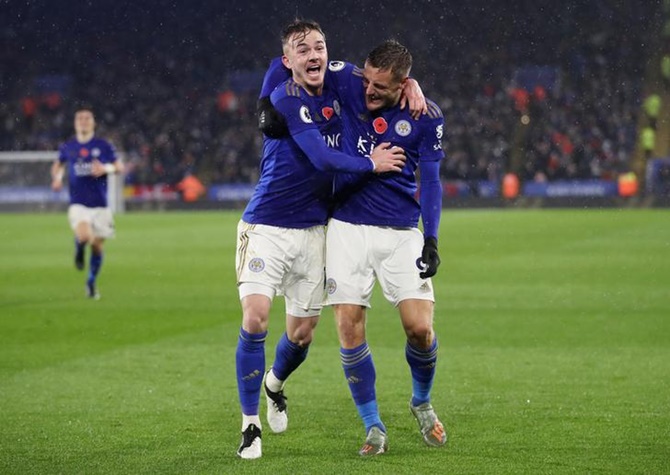 Jamie Vardy and James Maddison struck second-half goals as Leicester City beat an unimpressive Arsenal 2-0 at the King Power Stadium on Saturday to move into second place in the Premier League.

Leicester have 26 points and are above Chelsea on goal difference and one point ahead of champions Manchester City, who visit leaders Liverpool on Sunday.

Arsenal have now gone four games without a win in the league, and the latest defeat will add to the questions being asked of their decision to replace Arsene Wenger with Spaniard Unai Emery.

It was an evenly balanced first half, although Arsenal's looseness in possession frequently handed Leicester opportunities.

This Leicester team have also made a habit of upping their game after the interval, and that was again to be the case against the Gunners.

Arsenal had a 55th-minute effort from Pierre-Emerick Aubameyang ruled out for offside after a VAR review and 13 minutes later Leicester struck.

Vardy produced a characteristic, confident first-time finish from just inside the box after neat passing in the build-up from a confident Leicester side, clearly enjoying their football under Brendan Rodgers.

The goal was Vardy's ninth in 10 appearances against Arsenal and he went close to a second in the 72nd minute but his low drive was kept out by Bernd Leno.

Three minutes later, Vardy turned provider for the Foxes' second, poking the ball back to Maddison whose low strike whistled past Leno. 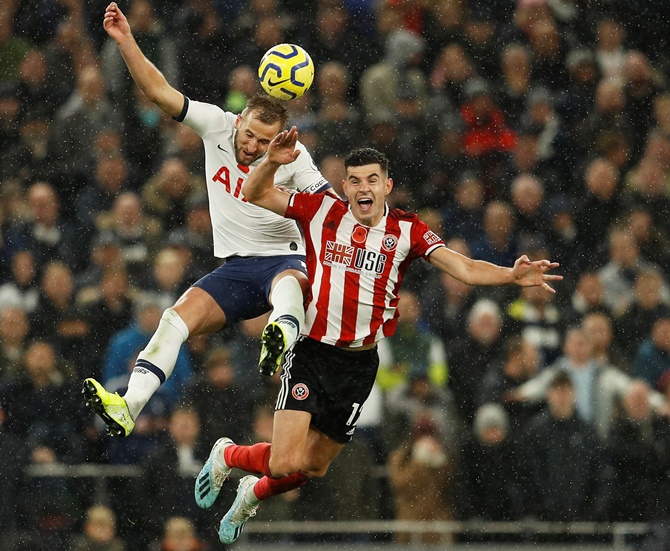 The hosts were fortunate to go ahead in the 58th minute through Son Heung-min's goal and again when David McGoldrick's apparent equaliser soon afterwards was ruled out by VAR.

Son's goal was Tottenham's first attempt on target but it failed to spark Mauricio Pochettino's side into life.

Chris Wilder's United kept plugging away and were duly rewarded when Baldock's miscued low cross sneaked in at the back post, the goal allowed to stand after another VAR check.

Tottenham showed belated urgency and Lucas Moura almost snatched a win in stoppage time when his piledriver was tipped over the bar by Dean Henderson.

The draw lifted United into fifth spot on 17 points with Tottenham languishing in 12th, three points worse off. 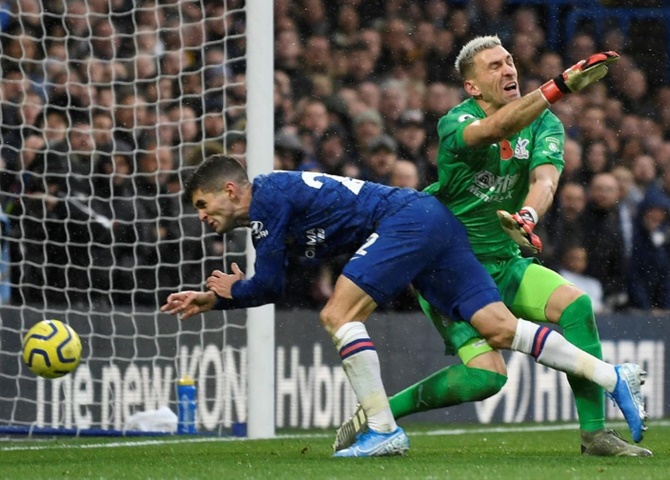 Second-half strikes by Tammy Abraham and Christian Pulisic earned Chelsea a 2-0 win over Crystal Palace and a sixth consecutive Premier League victory that pushed the Blues up to second in the standings on Saturday.

Abraham, who spearheads Chelsea’s new-look young side, broke Palace’s defensive line in the 52nd minute after a first-touch pass from Brazilian midfielder Willian and he sidefooted past goalkeeper Vicente Guaita.

Chelsea coach Frank Lampard praised Abraham for weathering a tough first half, when he struggled to make an impact, to claim his 10th goal of the season, making him joint top scorer with Leicester City’s Jamie Vardy.

“It might not be his best game on the show-reel,” Lampard said. “When you think about tough games and you come and get the goal which puts you in front to help you win the game, that’s just as important.”

Pulisic capped a fine display on the wing by making it 2-0 in the 79th minute when a shot by substitute Michy Batshuayi was blocked by former Chelsea defender Gary Cahill and looped invitingly for the American to head home.

It was Pulisic’s fifth goal in three league games, repaying Lampard’s confidence in him after a tough start to his time in England.

“He’s scoring in and around the six-yard box which I think is a huge thing for any wide player,” Lampard said.

“I am proud of the squad that we have got, but I also realise it’s still a snapshot in what is the big picture which is the long-term future here,” he said.

“We have got so much improvement to do because the gap was too big last year between us and the top two, and we want to try and close that.”

The return of N’Golo Kante after a groin injury, in for Jorginho who was suspended, strengthened Chelsea’s midfield as Lampard’s men recorded only their third clean sheet of the season.

Chelsea leapfrogged Manchester City and Leicester City, who have yet to play this weekend. They are five points behind leaders Liverpool, who have also a played a game less.

Newcastle fight back to sink Bournemouth 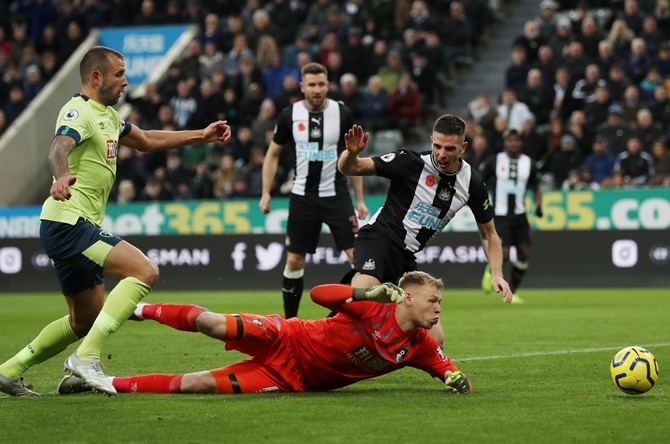 Goals from DeAndre Yedlin and Ciaran Clarke helped Newcastle United recover from a goal down to beat Bournemouth 2-1 at St James's Park on Saturday and secure back-to-back victories in this season's Premier League.

Bournemouth went ahead in the 14th minute with a brilliantly-worked corner as Harry Wilson made a looping run from the back post before hammering an unstoppable shot low to the keeper's right.

Newcastle lost their captain and defensive lynchpin Jamaal Lascelles to injury shortly afterwards, but the home side began to create decent chances as they battled their way back into the game.

Still yet to score for Newcastle, winger Allan Saint-Maximin hit the crossbar before his side levelled when his next shot was deflected into the path of Yedlin, who came steaming in at the far post to head home just before the break.

Better known for his heading prowess, Irish international Ciaran Clarke let his feet do the talking seven minutes into the second half as he scuffed the ball home for his second goal in two games to put his side ahead.

Newcastle weathered a late storm to hang on for a win that lifts them to 11th place in the table on 15 points after 12 games, while Bournemouth are a point ahead of them in 12th position. 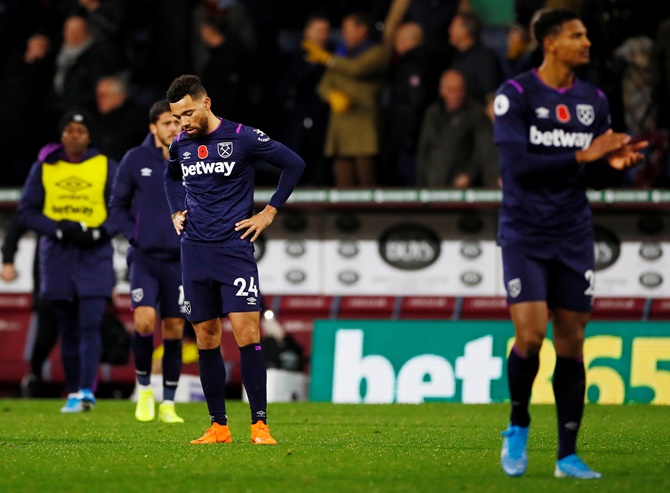 West Ham United's winless streak extended to six games as they suffered a 3-0 defeat to a Burnley side inspired by talented teenage winger Dwight McNeil.

Burnley, who had lost their last three games, went ahead in the 11th minute when McNeil swung in a deep corner, James Tarkowski snuck round the back and headed to Ashley Barnes who poked home.

The Clarets thought they had a second in the 36th minute when McNeil whipped in a superb cross which Chris Wood met with a thundering header but to the anger of the home crowd, the VAR review found evidence of off-side.

Burnley did double their lead, a minute before the break, and it was no surprise that McNeil was again the provider.

A throw out from West Ham's shaky Spanish keeper Roberto Jimenez to defender Fabian Balbuena was intercepted by the Burnley winger who burst forward before delivering a low cross which was expertly turned in by Wood.

Jimenez was at fault again for the third in the 54th minute, flapping at an Ashley Westwood corner which he managed to punch into his own net.

But the Spanish keeper did well to ensure that Burnley did not add to the punishment with a series of fine saves as Sean Dyche's side threatened to run rampage. 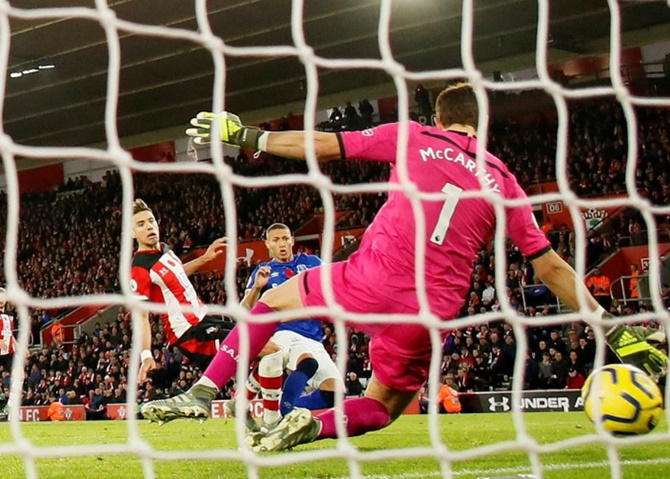 Goals from Tom Davies and Richarlison gave Everton their first away win of the season at Southampton on Saturday, taking some pressure off Toffees manager Marco Silva but putting more of it on his opposite number Ralph Hasenhuttl.

The visitors took the lead in the fourth minute when the unmarked Davies headed in a corner kick for his first goal since May 2018 - which also came against the Saints.

Everton created the most chances in the first half, while the home side failed to muster a single shot on goal, leading to boos and jeers at the halftime whistle.

The Saints were quick off the blocks in the second half, and the pressure paid off when halftime substitute Sofiane Boufal beat his marker on the right and squared the ball for Danny Ings to tap in from close range.

But with 15 minutes to go, Djibril Sidibe sent in a pin-point cross to the far post where Richarlison made it 2-1 with a left-footed first-time finish for his first goal in eight league matches.

Everton move up to 13th in the table on 14 points while Southampton remain in the drop zone, in 19th place on eight points.

© Copyright 2020 Reuters Limited. All rights reserved. Republication or redistribution of Reuters content, including by framing or similar means, is expressly prohibited without the prior written consent of Reuters. Reuters shall not be liable for any errors or delays in the content, or for any actions taken in reliance thereon.
Related News: Chelsea, Christian Pulisic, Frank Lampard, EPL, Tammy Abraham
SHARE THIS STORYCOMMENT
Print this article 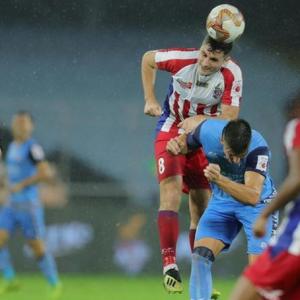