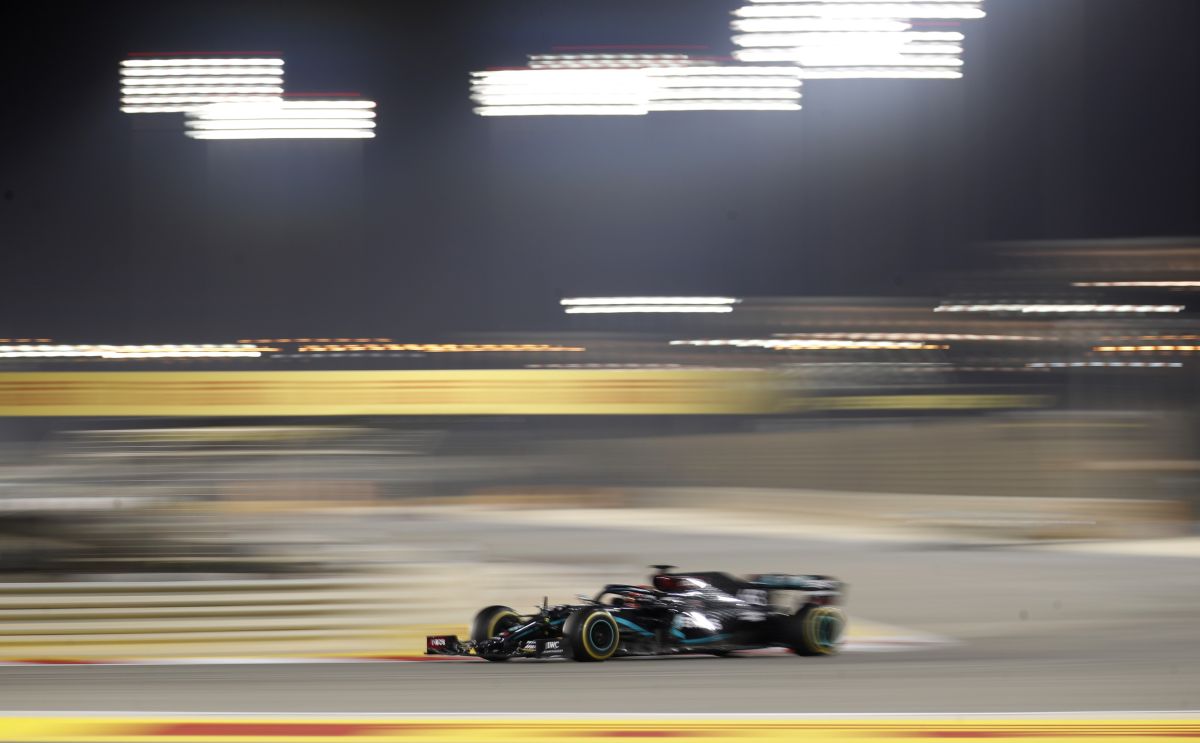 IMAGE: Mercedes' George Russell in action during the Sakhir F1 Grand Prix on Sunday. Photograph: Hamad I Mohammed/Pool via Reuters

Formula One champions Mercedes were fined 20,000 euros (18,036.91 pounds) on Sunday after they fitted the wrong front tyres to George Russell's leading car at a bungled Sakhir Grand Prix pitstop.

Mercedes mistakenly put tyres reserved for team mate Valtteri Bottas onto Russell's car after both pitted when the safety car was deployed, forcing the Briton to make another stop that dropped him to fifth.

Russell eventually finished ninth after a late slow puncture dealt another blow just as he had moved back up to second and was reeling in Racing Points's Mexican winner Sergio Perez.

Mercedes were summoned by stewards post-race for the infringement.

The team explained that a radio communications technical issue was to blame, with the pit wall's message to the pit crew going unheard because Russell had transmitted over it.

"We knew immediately when Valtteri didn't have his tyres, we knew that Valtteri's tyres were on George's car," said team boss Toto Wolff.

The stewards found mitigating circumstances, with Mercedes rectifying the problem within one lap and losing further time. Russell was allowed to keep the points.

Bottas's pitstop took 27 seconds as a result of the mix-up, with mechanics taking off his car's tyres and then putting the same ones back on again once they realised what had happened, compromising the Finn's race

Stewards noted that such a breach had not previously happened in Formula One.

Ferrari's Charles Leclerc will have a three-place grid drop at the season-ending Abu Dhabi Formula One Grand Prix after he caused a first lap collision in Sunday's penultimate round in Bahrain.

The Monegasque tangled with Racing Point's eventual race winner Sergio Perez in a collision that led to the retirements of Leclerc and Red Bull's Max Verstappen and left the Mexican fighting back from 18th.

Stewards said Leclerc had braked too late into turn four, locking the front right wheel and colliding with Perez as the Mexican took the normal racing line into the corner.

Leclerc, who also collected two penalty points, admitted he was at fault after the race.

"I expected him to go around the outside of Valtteri (Bottas) and stay there but I think he decided after to come back on the inside and I was there and then it was to late for me to slow down," he said of Perez.

"I don't think it's a mistake from Checo (Perez), I'm not putting the blame on Checo. If there's anyone to blame today it’s me but I would say it more unfortunate than a blame."

© Copyright 2021 Reuters Limited. All rights reserved. Republication or redistribution of Reuters content, including by framing or similar means, is expressly prohibited without the prior written consent of Reuters. Reuters shall not be liable for any errors or delays in the content, or for any actions taken in reliance thereon.
Related News: George Russell, Charles Leclerc, Valtteri Bottas, Sergio Perez, Abu Dhabi GP
SHARE THIS STORYCOMMENT
Print this article