Unseeded Czech Barbora Strycova weathered an early storm to flatten British hopes with a 7-6(5), 6-1 defeat of Johanna Konta in the Wimbledon quarter-finals on Tuesday.

Konta powered into a 4-1 lead in the first set but Strycova never panicked and used her superior craft to turn the match in her favour in front of a deflated Centre Court crowd.

After playing a superb tiebreak to take the first set the 33-year-old Strycova took complete charge of the match as Konta self-destructed with a flurry of wild errors.

Konta had raised hopes of a first British women’s singles champion at Wimbledon since 1977 with a strong run to the last eight, but she was well-beaten in the end. 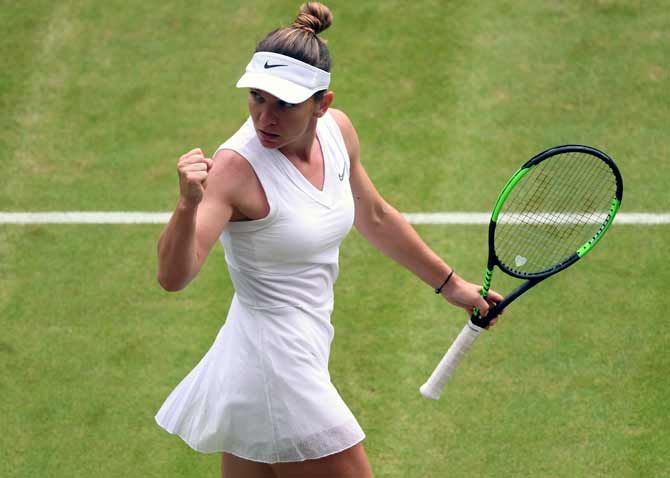 While former world number one Simona Halep reached her second Wimbledon semi-final after overcoming an early onslaught to deliver another textbook example of match-play tennis and dispatch China’s unseeded Zhang Shuai 7-6(4), 6-1, seven-time champion Serena went through several anxious moments before getting the better of Alison Riske 6-4, 4-6, 6-3.

Just as she did in quelling the lively challenge of 15-year-old Coco Gauff on Monday, Halep initially struggled and looked in real danger when 4-1 down and facing more break points in the opening set. However, the Romanian dug in to see off the threat then played her usual percentage tennis as Zhang lost her way.

Seventh-seed Halep will now face either number eight seed Elina Svitolina, who beat unseeded Karolina Muchova 7-5, 6-4, as she bids to reach the final for the first time having lost to Eugenie Bouchard in the last four in 2014.

“I fought hard in the first set, even if I knew I was 4-1 and she was hitting hard, I knew she would hit with a lot of power. I knew I would have to play aggressively and I did it great,” she said.

“I have energy, I feel fresh and confident and I am perhaps playing my best tennis on grass.” 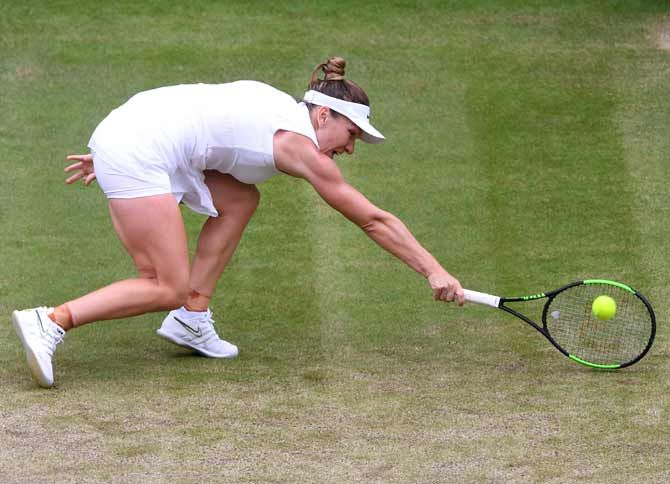 Zhang is ranked 50th and has reached the quarter-finals in only one Grand Slam event - the 2016 Australian Open.

However, she started superbly, serving and returning with depth, power and confidence to break in the second game and race to a 4-1 lead. That looked set to be 5-1 but Halep battled and chased to save four break points in the game and turn the match.

The 27-year-old Romanian, last year’s French Open champion, began to find her own rhythm, delivering the calculated low-risk groundstrokes that wore down American Gauff on Monday to hold, then broke back via a double fault.

Zhang’s double-handed backhand, so deadly in the opening games, began to pepper the tramlines as the inconsistency indicated by her poor Grand Slam record became evident.

She clung on enough to get to a tiebreak but was well beaten in it and an early break in the second set put Halep 3-1 up.

Zhang’s head then dropped and the errors flowed as Halep rattled through the remaining games at a canter. 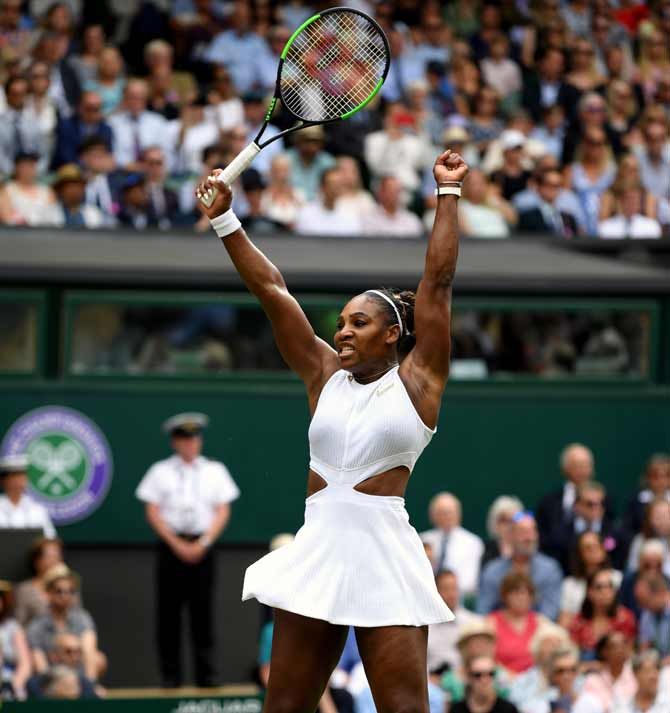 Serena Williams clubbed her way into the semi-finals, draining the last drop of fight from fellow-American Riske before sealing her 6-4, 4-6, 6-3 win in a rip-roaring Centre Court contest.

For two sets, Riske absorbed every last punishing blow from the seven times champion, while her own lightweight jab inflicted some early pain and then levelled the seesaw encounter at 1-1.

Williams’s blows, however, became too frequent and too heavy in the final games, with the weaponised serve pushing the world number 55 Riske back on her heels, leaving the Williams forehand to work like an old slugger’s right-hook.

Having knocked out world number one Ash Barty in the last round and having spent over nine hours on court en route to the quarters - the longest path to the last eight of anyone since 2011 - Riske had shown a streak of pure Pittsburgh steel. 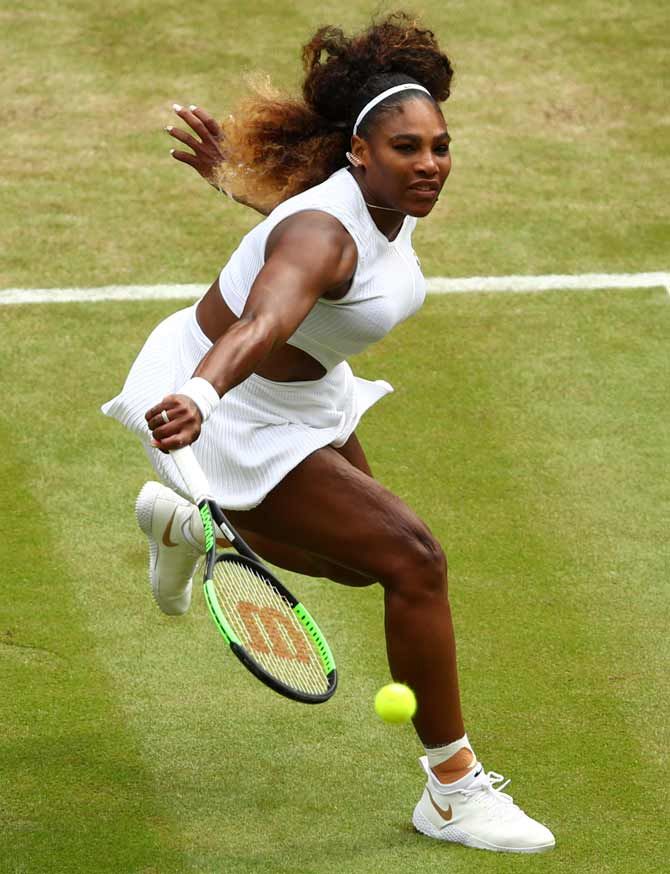 But Williams is tennis tungsten, and recovered superbly from a brief wobble in which she lost the second set and fell a break behind in the third.

She eventually charged over the finish line after more than two hours on court, bringing up match point when Riske netted a forehand and completing the job in typical fashion with her 19th ace of the match.

“It was really satisfying; I wouldn’t have won that match a couple of weeks ago, every match here has really counted,” said Williams whose time on court since the Australian Open in January has been limited by a niggling knee injury.

“She has played so great and beaten so many great players here. I was really pumped, it’s for a place in the Wimbledon semis - it’s a long arduous road.” 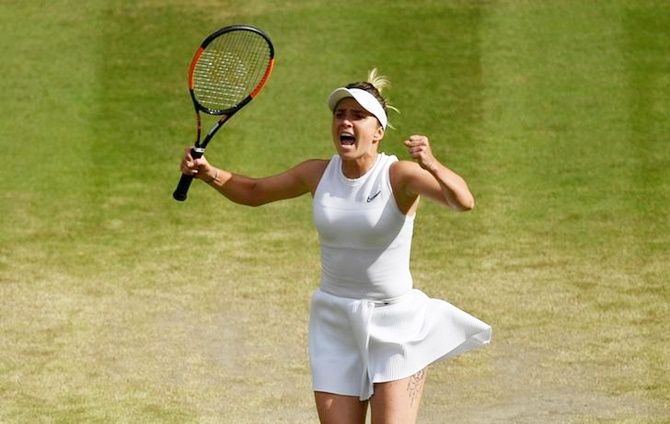 It was 28th-time lucky for Elina Svitolina as she finally managed to get a grip on her nerves to become the first Ukrainian woman to reach the singles semi-finals of a Grand Slam, with a 7-5, 6-4 win over Karolina Muchova.

Svitolina has long been expected to join the challenge for the biggest prizes in tennis but until Tuesday, all those attempts had fallen well short.

What was surprising was that the feat was achieved on Wimbledon’s rather threadbare lawns as the Ukrainian’s game is more suited to the sport’s slower surfaces.

She trailed 1-4 in the first set and was broken when she went to serve for the match at 5-2 up in the second set.

Her heart must have been pounding at the thought of another missed opportunity - considering she had fallen at this stage on four previous occasions at the majors - but somehow she managed to keep the jitters in check to subdue the spirited challenge of her 68th-ranked opponent.

“I had to fight for every point, take my chances, and just try to get the extra ball over the net,” she said.

© Copyright 2021 Reuters Limited. All rights reserved. Republication or redistribution of Reuters content, including by framing or similar means, is expressly prohibited without the prior written consent of Reuters. Reuters shall not be liable for any errors or delays in the content, or for any actions taken in reliance thereon.
Related News: Simona Halep, Shuai Zhang, All England Lawn Tennis and Croquet Club, Getty Images, Coco Gauff
SHARE THIS STORYCOMMENT
Print this article 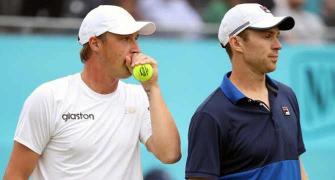 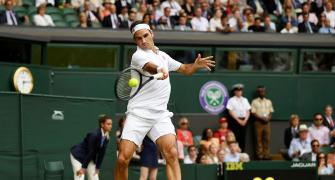 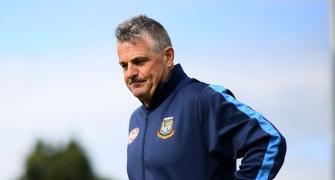 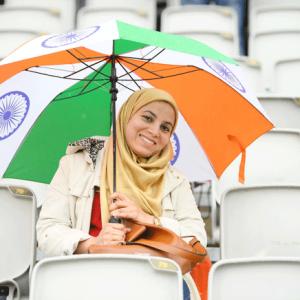 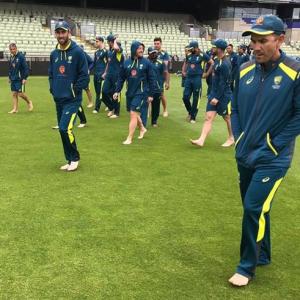 When Australia bared their feet and souls