Top seed Daniil Medvedev battled back from two sets down and saved a match point against Canada's Felix Auger-Aliassime to reach the Australian Open semi-finals with a 6-7 (4), 3-6, 7-6 (2), 7-5, 6-4 victory on Wednesday.

The 25-year-old Russian had his back firmly up against the wall for much of an absorbing contest as Auger-Aliassime produced some stunning tennis on Rod Laver Arena.

But he simply refused to lie down as he overturned a two-set deficit for only the second time in his career to set up a Friday semi-final against Greek Stefanos Tsitsipas who he beat at the same stage a year ago.

It was the kind of resilience absent nine-time champion Novak Djokovic has trademarked and Medvedev, the reigning US Open champion, said he had taken inspiration from the Serbian to get out of trouble.

"At two sets down, I was not playing my best and Felix was playing unbelievable, serving unbelievable, he was all over me to be honest. I didn't know what to do so I told myself 'what would Novak do?" Medvedev said on court, prompting some boos.

"What came to mind, was that I thought if Felix wants to win it he will have to fight for the last point.

"I managed to raise my level and when they closed the roof I felt the momentum and started serving better."

Ninth seed Auger-Aliassime, 21, was the dominant player in the first set and despite a wobble when serving at 6-5 he won a tiebreak courtesy of some Medvedev double-faults the Russian later blamed on the sweaty conditions.

Serving beautifully and playing with composure and precision from the back of the court, Auger-Aliassime cruised through the second set with a single break with Medvedev looking subdued.

Auger-Aliassime was one set away from a first career win against the Russian and a place in his second Grand Slam semi-final, but the night was still young.

Medvedev hung tough towards end of the third set as Auger-Aliassime sensed victory but he managed to force a tiebreak and closed it out after a shower caused the roof to be closed.

Serve dominated the fourth set but in the 10th game Medvedev coughed up a double-fault to hand his opponent a match point.

Medvedev barely blinked though and escaped with some powerful serving. He then pounced in the next game to break serve as Auger-Aliassime sent a forehand wide, before holding his own to extend the match into a decider.

With the match moving into its fifth hour, Medvedev finally seized control with an early break of serve but Auger-Aliassime did not crumble.

The Canadian earned a break back point trailing 4-3 but Medvedev snatched away the opportunity with a timely ace and then had Medvedev down 15-40 as the Russian served at 5-4.

Medvedev dialled up his inner Novak once again, however, reeling off the next four points to claim an epic victory after four hours and 42 minutes.

© Copyright 2022 Reuters Limited. All rights reserved. Republication or redistribution of Reuters content, including by framing or similar means, is expressly prohibited without the prior written consent of Reuters. Reuters shall not be liable for any errors or delays in the content, or for any actions taken in reliance thereon.
Related News: Daniil Medvedev, Felix Auger Aliassime, Novak Djokovic, Rod Laver Arena, Greek Stefanos Tsitsipas
COMMENT
Print this article 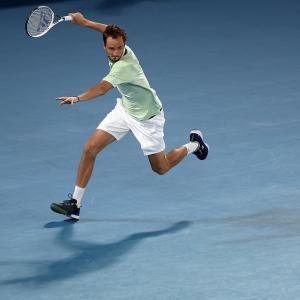