While South African Rhodes, a former Mumbai Indians fielding coach who resides in the country for a considerable part of the year, has a daughter named 'India', West Indian swashbuckler Gayle has been a big hit among cricket fans for his exploits in the IPL.

Modi, in his letter to Rhodes, said: "I would like to convey my Republic Day Greetings to You."

"Over the years, you have developed a profound connection with India and its culture. This is truly reflected when you named your daughter after this great nation. You truly are a special ambassador of the strong relations between our nations," the letter that Rhodes shared on his social media page said.

"India is witnessing a series of historic socio-economic transformations. I am confident these will empower lives and contribute to the global fund." 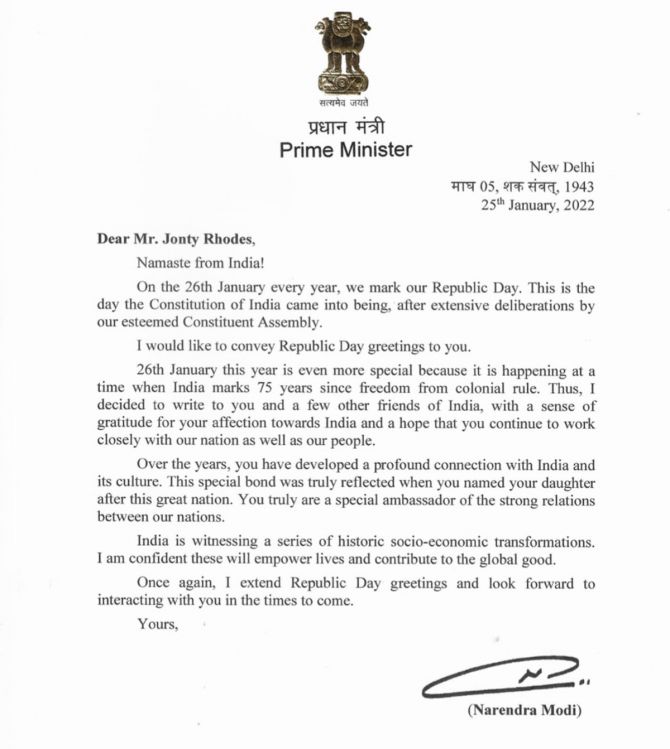 Both Rhodes and Gayle thanked the Indian Prime Minister for his gesture.

"Thank you narendramodiji for the very kind words. I have indeed grown so much as an individual on every visit to India. My whole family celebrates RepublicDay with all of India, honouring the importance of a Constitution that protects the rights of the Indian people JaiHind," Rhodes tweeted.

Jamaican Gayle, who represents the West Indies in international cricket, also spoke about his special bond with Indian public.

"I would like to congratulate India on their 73rd Republic Day. I woke up to a personal message from Prime Minister Modi reaffirming my close personal ties with him and to the people of India. Congratulations from the Universe Boss and nuff (sic) love," Gayle tweeted.

IPL has been a game-changer in the sport and every season, global cricketers make a beeline to take part in the cash-rich league which has changed lives for the better.

The likes of Gayle, David Warner, AB de Villiers have all been revered and loved by cricket fans in India.