If the result was to be expected, with China winning all the diving golds at last year's world championships in Shanghai, so too was the praise for the wave-like venue with its undulating roof stretching like the grey belly of a whale across the brilliant blue pools. 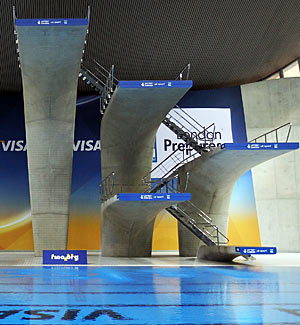 "We had a few technical difficulties but they fixed them all straight away, like that. Which has been quite amazing actually so the organising committee are doing a fantastic job. I'm going to enjoy diving here in July.

Asked how it compared to other Olympic pools, he grinned. "Look, I have a soft spot for the Water Cube (in Beijing). I am always going to."

Compatriot Loudy Wiggins, making her comeback at the age of 32 in the women's 10m platform, said she was stunned by the venue that cost around 270 million pounds ($428.48 million) to build.

"I walked in and actually went 'Wow, this is incredible," said the three-times Olympian. "It's quite spectacular, even going as far as saying it's breathtaking - especially with a full capacity crowd.

"Having said that, it is quite comfortable to dive in which is always important. You've got all the right references, you can see the water properly, the roof's not a distraction. They pretty much thought of everything."

LOCOG chief executive Paul Deighton welcomed the crowd, who applauded each dive with enthusiasm, to what he said is a truly extraordinary building in the heart of the Olympic Park in east London. "It is going to be a terrific venue, not just for the Games here in the summer of 2012 and this event but also in the longer term," he said.

© Copyright 2021 Reuters Limited. All rights reserved. Republication or redistribution of Reuters content, including by framing or similar means, is expressly prohibited without the prior written consent of Reuters. Reuters shall not be liable for any errors or delays in the content, or for any actions taken in reliance thereon.
Related News: LOCOG, Brian Nickson Lomas, China, Qin Kai, Matthew Mitcham
COMMENT
Print this article