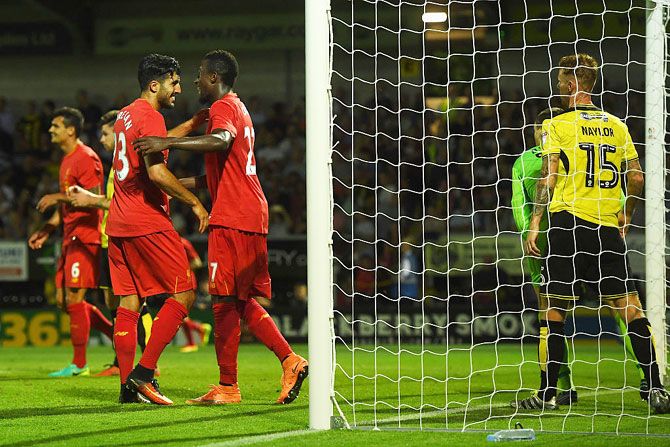 IMAGE: Liverpool's Emre Can (left) and Divock Origi celebrate the own goal scored by Burton Albion's Tom Naylor during their League Cup second round match at Pirelli Stadium in Burton upon Trent, England, on Tuesday. Photograph: Gareth Copley/Getty Images

Premier League clubs West Bromwich Albion and Watford were knocked out in the League Cup second round by lower-league opponents on Tuesday as a strong Liverpool side crushed championship Burton Albion 5-0.

West Brom lost 4-3 on penalties to NorthamptonTown following a 2-2 draw and Watford were beaten 2-1 at home after extra time by GillinghamTown, also a third-tier side.

Gillingham came from behind to upset Watford.

Substitute Odion Ighalo gave Watford the lead in the second half but Mark Byrne equalised to take the tie into extra time and striker Bradley Dack grabbed the winner.

Divock Origi and Roberto Firmino gave Liverpool a 2-0 halftime lead at Burton before a Tom Naylor own goal and two late strikes by Daniel Sturridge completed the rout.

"This was a very serious, professional display from our side," Liverpool manager Juergen Klopp said.

"There were nice goals -- nothing to criticise. It was humid today, not easy for either team."

Chelsea looked set to cruise into the third round when goals by Michy Batshuayi and Victor Moses gave them a 2-0 lead against Bristol Rovers.

But Peter Hartley pulled one back and although Batshuayi restored the hosts' two-goal advantage before the interval, Ellis Harrison's second-half penalty for third-tier Rovers ensured a tense finale.

Everton forward Arouna Kone scored two late goals to round off a 4-0 win over Yeovil and former England striker Peter Crouch grabbed a hat-trick in Stoke's 4-0 drubbing of hosts Stevenage.

The top-flight teams qualified for European competition will enter the League Cup in the next round.

© Copyright 2021 Reuters Limited. All rights reserved. Republication or redistribution of Reuters content, including by framing or similar means, is expressly prohibited without the prior written consent of Reuters. Reuters shall not be liable for any errors or delays in the content, or for any actions taken in reliance thereon.
Related News: Watford, Tom Naylor, Liverpool, Burton Albion, Divock Origi
COMMENT
Print this article