Star players Saina Nehwal and Lee Chong Wei fetched whopping prices of US $120,000 and 135,000 respectively, while unheralded Pradnya Gadre and K Maneesha received unexpected high bids in the players' auction of the US $1 million Indian Badminton League, in Delhi, on Monday.

London Olympics bronze medallist Saina was bought by Hyderabad Hotshots for approximately Rs 71,27,796 after beating bids of Lucknow Warriors and Pune Pistons in the much-awaited auction, where over 150 players went under the hammer for 66 slots to fill six teams.

Each team will have six Indians, four foreigners and an Indian junior player.

World No 1 Lee Chong Wei, however, was the costliest deal. He was purchased by Mumbai Masters for approximately Rs 8,019,032. The Mumbai franchise beat the bids of Banga Beats and Krrish Delhi Smashers. 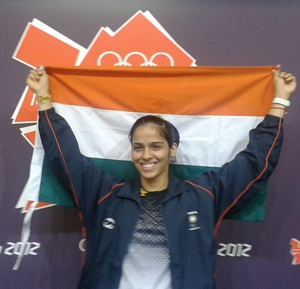 Saina, one of the six icon players with base price of US $50,000 (Rs 29,86,264), had stated that she would prefer to be either with the Hyderabad or Lucknow team with a slight tilt towards her hometown.

In another interesting bidding war between Bangalore and Hyderabad, doubles player Pradnya Gadre fetched a whopping US $46,000 after starting with a base price of US $10,000, while little-known Maneesha was sold at US $26,000, more than six times her base price of US $4000.

"Last night we had a closed bidding but then two players, Jwala and Ashwini, went unsold, so it was scrapped and it was decided that their base price be slashed to US $25,000 and all icon players should be put under the hammer at the auction," said Ashish Chadha, CEO of Sporty Solutionz, the commercial partner of IBL.

"Since Jwala and Ashwini were signed as icon players keeping in mind the women's doubles, which was later replaced with another men's singles player, the IBL decided to safeguard their interest by paying them the deficit amount and give them a chance to fetch a bigger amount in the auction," added Chadha.

The six franchise owners, who had a cap on their bid spending of US $275,000, however, didn't show any interest in Thailand's Boonsak Ponsana (ranked fourth), Japan's Kenechi Tago (ranked fifth), Indonesia's Tommy Sugiarto (ranked eighth) and Sony Dwi Kuncoro (ranked 10th) as they will not be available for the entire tournament, which will be held from August 14 to 31.

"I am disappointed because it took a lot for us to get this players on board but I can understand the franchises point of view. They also can't help as these players are not available for the entire event," Chadha said.

Image: Saina Nehwal after winning bronze at the London Olympics