Churchill Brothers coach Drago Mamic, who failed to guide the team to I-League triumph, has been shown the door by club president Churchill Alemao.

Drago, formerly national coach of Myanmar, was clearly told about the management's intentions of getting nothing less than the I-League title when he joined Churchill Bothers in March following the departure of Vincent Subramaniam.

When the club finished fourth in the I-League, behind champions Salgaocar, East Bengal and Dempo, in that order, he was sacked.

"Too many times our players played the ball backwards and played in our own half. That proved suicidal in many games," said Alemao, whose found it hard to digest the defeat against Pune FC, with two goals being conceded in the last six minutes.

"We will have a new coach in place before the start of the season. Most probably he will be from Portugal," Alemao said.

Last year, Brazilian coach Carlos Robert Pereira was shown the door for not winning the I-League, despite finishing second behind Dempo and winning the IFA Shield and Durand Cup.

Dargo's departure means Churchill will have their seventh coach since Karim Bencherifa left for Mohun Bagan in 2008. 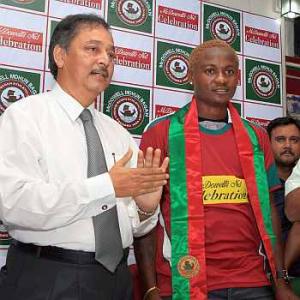