France are preparing for their World Cup quarter-final with England and the players cannot be expected to resolve issues outside football, coach Didier Deschamps said on Friday following the death of a migrant worker in Qatar.

Hosts Qatar launched a work safety investigation into the death of a Filipino on Thursday after reports that the man died while working at a training site during the soccer World Cup.

Qatar's treatment of migrant workers has come under enormous scrutiny during the build-up to the tournament but Deschamps chose not to wade into the topic even as he expressed his "sincere condolences" to the family.

When asked about the migrant worker's death during the tournament, Deschamps said: "It's always a sensitive topic, it's not something I want to talk about at length. I've just learned about it.

"It may be a priority for you today but my priority is the match tomorrow. We're involved in a tournament here. That doesn't mean we're totally insensitive to what goes on outside the football, but you shouldn't mix everything up."

The French Football Federation has also supported calls for the compensation fund for victims of work accidents at World Cup construction sites. Deschamps, however, said the matter was out of his hands.

"What else would you like me to say? Now I'm not trying to avoid the question. But I'm here with my team, we're footballers and we're here for a football tournament," he added.

"Footballers unfortunately are not in a position to resolve problems outside football. This is more than a problem of course, someone has lost their life and we need to respect that.

"But it's not necessarily going to help by talking about him. Some might think that talking about him is a way of showing respect, but I think for his family -- the pain and suffering they must be feeling -- that needs to be respected too." 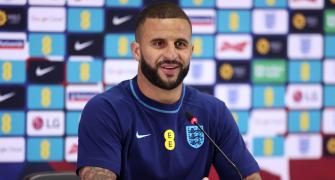 Will Walker have the last laugh against Mbappe?