Bahrain tense as F1 chiefs say race to go ahead

The Bahrain Grand Prix will go ahead next weekend despite concerns over security but the race organisers' decision has split opinion in the Gulf state, which has been shaken by a year of anti-government protests.

The International Automobile Federation (FIA) said on Friday after weeks of doubt that the Formula One race, cancelled last year due to a crackdown on pro-democracy protestors, was on.

"All the teams are happy to be there," Formula One chief Bernie Ecclestone said in Shanghai, which hosts the Chinese Grand Prix this weekend. "There's nothing happening. I know people who live there and it's all very quiet and peaceful."

But just hours before the federation announced its decision, a gas cannister thrown at cars in the capital Manama exploded, Al Arabiya television reported.

A stiff test will also come after Muslim prayers on Friday, when a funeral is planned for a Bahraini man shot during an anti-government protest two weeks ago.

The memorial should draw large numbers in a challenge to security forces, who habitually blanket protests with tear gas.

The crackdown, in which more than 30 people were killed, was condemned by several international human rights groups.

"It's exactly what we need to right now to unite us all and have a driving force to bring us all together which is the common interest of the Formula One," said Yasmeen, a Sunni from Budaiya who said she would at the races with her friends.

But Abdulla Hassa, a 19-year-old Shi'ite from Sanabis village, said that after last year's repression and deaths: "There's no way Formula One should be held".

"For the overwhelming majority of people in the Kingdom, be they residents or visitors, daily life is back to normal and has been for many months now," said Jassim Albardooli, a spokesman for Bahrain International Circuit.

"At this moment in time there is no reason to think that the 2012 Formula 1 Gulf Air Bahrain Grand Prix is not going ahead."

© Copyright 2020 Reuters Limited. All rights reserved. Republication or redistribution of Reuters content, including by framing or similar means, is expressly prohibited without the prior written consent of Reuters. Reuters shall not be liable for any errors or delays in the content, or for any actions taken in reliance thereon.
Related News: Bahrain International Circuit, Gulf Air Bahrain, International Automobile Federation, Bernie Ecclestone, Abdulla Hassa
SHARE THIS STORYCOMMENT
Print this article
Ecclestone says Bahrain race is on
British cop tells FI it's safe to race in Bahrain
Bahrain hangs over F1 as teams head for China 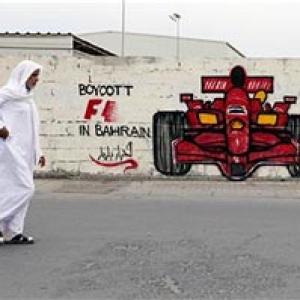