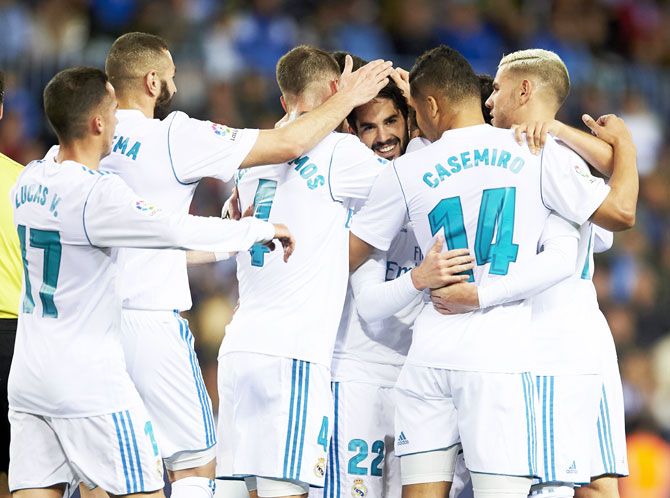 Real Madrid midfielder Isco made up for the absence of Cristiano Ronaldo by guiding his heavily-rotated side to a 2-1 win at basement club Malaga on Sunday which lifted them above Valencia and up to third in La Liga.

Atletico Madrid moved back to within 11 points of runaway leaders Barcelona by comfortably beating Levante 3-0 at home as forwards Angel Correa, Antoine Griezmann and Fernando Torres were all on target.

Isco curled in a fizzing free kick to break the deadlock in the 29th minute but refrained from celebrating against his hometown club. The Spain international then provided the final pass of an exquisite team move for Casemiro to tap in the second goal in the 63rd.

Malaga striker Diego Rolan scored down the other end in the final minute of stoppage time after controlling the ball with his hand but there was no time left for the league's lowest-ranked club to try to add to their goal.

Real had clinched last season's Liga title on their last trip to Malaga. However, coach Zinedine Zidane used this visit to rest many players after Wednesday's energy-sapping Champions League quarter-final second leg with Juventus, which his side lost 3-1 though they advanced to the semi-finals 4-3 on aggregate.

The Frenchman left top scorer Ronaldo, Gareth Bale, Luka Modric and Raphael Varane at home and put Marcelo and Toni Kroos on the bench. There were rare starts for defenders Jesus Vallejo and Theo Hernandez while fringe players Borja Mayoral and Dani Ceballos came on in the second half.

Isco was given a standing ovation from his former club's fans when he left the pitch for the substitutes' bench.

"We played very well, it's not easy to play against a team like Malaga who don't deserve to be where they are in the table. We approached the game seriously, we respected our opponents and did a good job."

Real play again in the league on Wednesday at home to Athletic Bilbao before their Champions League semi-final first leg against Bayern Munich on April 25.

Correa lashed in Atletico's opening goal against struggling Levante in the 33rd minute after a bursting run into the box by Spain forward Vitolo and Griezmann buried the ball in the top corner to score the second three minutes after halftime.

Torres was given a rousing reception when he came off the bench to replace Griezmann in the second half, making his first appearance at Atletico's Wanda Metropolitano stadium since announcing that he will leave the club at the end of the season.

The veteran striker got an even bigger cheer when he met Correa's cross on the volley to score the third in the 77th, his 100th goal in La Liga.

"For me every game from now until the end is going to be like a party," Torres told reporters.

"We saw how much the fans enjoyed it and that makes me more motivated. I hope it's not my last goal of the season and not my last game."

Atletico are second in the standings on 71 points, 11 behind Barca and four ahead of Real.

Neymar likely to be fit in time for World Cup 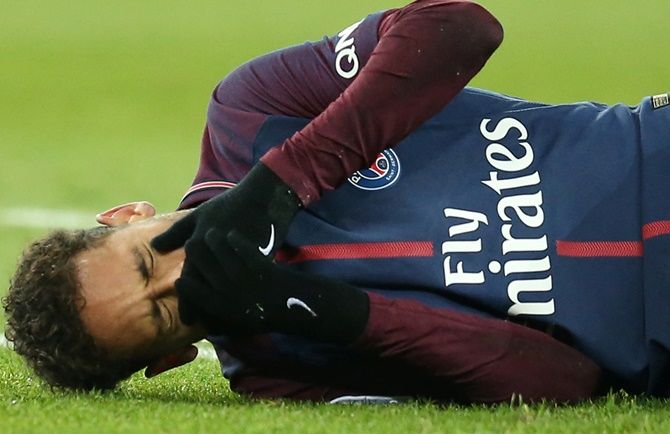 Brazilian star striker Neymar has hinted he is on track to recover fully after his foot operation, meaning that the player would be fit in time to feature in the World Cup.

The former Barcelona and Santos man landed awkwardly during a clash with Marseille forward Bouna Sarr in their Ligue 1 encounter in February and sustained injuries in the process. He was later stretchered off the pitch and was subsequently required a surgery to treat the same.

Talking about his return, Neymar revealed that he now needs a month's time to recover fully from his injury as the Paris Saint-Germain striker targets return during Brazil's opening World Cup match against Switzerland in Russia on June 17.

"There's a month yet. I'm progressing well. Everything is as good as possible, Goal.com quoted Neymar, as saying.

Recently, PSG had said that Neymar's recovery has been going pretty well, while coach Unai Emery said that he hopes to see the Brazilian making a return before the end of the season. 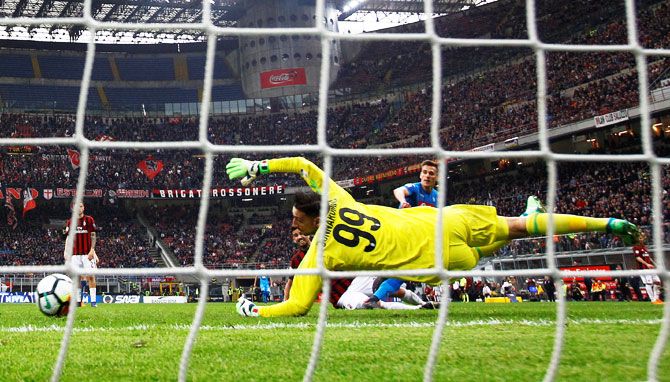 AC Milan goalkeeper Gianluigi Donnarumma foiled title challengers Napoli with a stunning stoppage time save in a 0-0 draw on Sunday and Juventus took full advantage by beating Sampdoria 3-0 to go six points clear at the top of Serie A.

Substitute Douglas Costa set up all three goals as Juve put their bitter Champions League exit at the hands of Real Madrid behind them and took a big step towards a seventh successive title.

Juve have 84 points with Napoli on 78 followed by Lazio and AS Roma, who were meeting in their derby in the late kickoff, on 60.

Donnarumma, who became Milan's first-choice goalkeeper at the age of 16, was making his 100th Serie A appearance at 19 years and 49 days and his save from Napoli substitute Arkadiusz Milik must rank among his finest so far.

Milik seemed certain to score when Lorenzo Insigne's header found him alone in front of goal but Donnarumma showed extraordinary reflexes to turn his low shot around the foot of the post.

Napoli produced their usual slick passing and pinned Milan in their own half for long periods but lacked imagination and variety in the final third.

Sixth-placed Milan had a goal by Mateo Musacchio ruled out for offside in the first half.

"The team is doing what it has to do, at the moment we are less brilliant in attack but it was still a good performance."

Juve, who wiped out a 3-0 first leg deficit against Real on Wednesday only to lose to a stoppage time penalty, went ahead on the stroke of halftime when Mario Mandzukic volleyed home Costa's cross.

The Brazilian winger, who had replaced the injured Miralem Pjanic two minutes earlier, also provided the cross for Benedikt Hoewedes to head the second on the hour, then went on a brilliant solo run to set up the third for Sami Khedira.

Diabate, on loan from Turkish side Osmanlispor, put Benevento ahead with a delicate chip in the 22nd minute.

Matteo Politano scored twice to put Sassuolo in front before Diabate turned in Danilo Cataldi's cross to give Benevento their first away point of the season, although they stayed 11 points adrift at the bottom.

Fiorentina's run of six successive wins ended in a 0-0 draw at home to SPAL who are 17th with 28 points, just above the drop zone.

Schalke 04 beat Ruhr valley rivals Borussia Dortmund 2-0 on Sunday to stay on course for a second-place Bundesliga finish and a return to the Champions League with four games left in the season.

The Royal Blues had the upper hand in the first half but could not make their advantage count against the lethargic visitors.

Five minutes after the restart, however, Yevhen Konoplyanka was left unmarked in the box and drilled in to give Schalke the lead following a defensive mistake from Marcel Schmelzer.

Brazilian Naldo made sure of the points for Domenico Tedesco's team with a free-kick missile from 25 metres out in the 82nd minute.

To make matters worse for Dortmund, their forward Michy Batshuayi had to be taken off on a stretcher with an injury in stoppage time. The 24-year-old Belgian is on loan from Chelsea until the end of the season.

Schalke are second on 55 points with Dortmund dropping to fourth on 51, behind third-placed Bayer Leverkusen on goal difference, after they beat Eintracht Frankfurt 4-1 on Saturday.The top four teams qualify for the Champions League group stage.

RB Leipzig came from a goal down but managed only a 1-1 draw at Werder Bremen to suffer a setback in their own Champions League aspirations.

Leipzig moved up to fifth on 47 but are still four points behind Dortmund.

Bayern Munich midfielder Arturo Vidal will undergo minor knee surgery after picking up an injury during training and will be out for a short period of time, coach Jupp Heynckes said on Monday.

The 30-year-old Chile international is now sidelined for Tuesday's German Cup semi-final against Bayer Leverkusen and is also unlikely to make their Champions League semi-final first leg against Real Madrid next week.

Bayern are chasing a treble of titles having already secured the Bundesliga crown.

"He slipped and turned his knee," Heynckes said of Vidal's injury in training on Sunday.

"I talked with the doctor. He did a scan. Arturo will need to undergo a minor arthroscopic surgery. He is already on his way to Augsburg. He is now ruled out for the short-term for sure."

© Copyright 2021 Reuters Limited. All rights reserved. Republication or redistribution of Reuters content, including by framing or similar means, is expressly prohibited without the prior written consent of Reuters. Reuters shall not be liable for any errors or delays in the content, or for any actions taken in reliance thereon.
Related News: Malaga, La Liga, Levante, Atletico Madrid, Borussia Dortmund
SHARE THIS STORYCOMMENT
Print this article 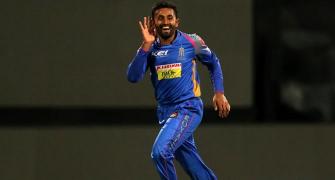 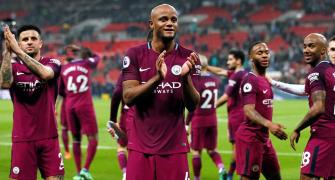 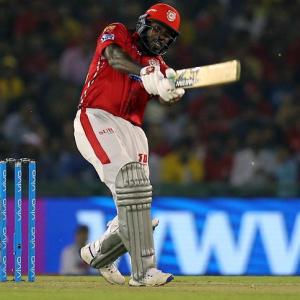