'It is our right to protest and draw the attention of this government, which is sleeping and appears blind, as it has failed to see the pain and struggle of the jobless youth.' 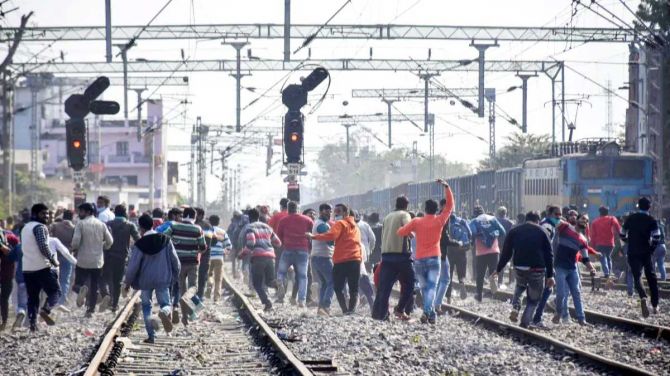 "Hum berozgar hai, sarkari job khatam ho raha hai. Railway mein job ka chance tha lekin woh bhi samapth kiya ja raha hai. Hum ko protest karna padega (We were unemployed. There are very few government jobs available. There was an opportunity to get a job in the Railways, but even that is being destroyed. We have no alternative but to protest)," says Vishal Rai.

A railway job aspirant, he has joined the spontaneous protest that erupted in Patna on January 24 against the alleged irregularities in the result of the Railway Recruitment Board's Non-Technical Popular Categories examination.

Vishal represents the growing frustration and helplessness that thousands of jobless youth are facing in Bihar.

In his early 20s, he -- and many other young Biharis like him -- are protesting for the fifth day against the unfair result of the RRB examination and the fresh notification for the Group D exam.

Many of these youngsters are staying in Patna -- Vishal, for example, has been staying at a private lodge in the state's capital since 2018 -- preparing for different competitive examinations for government jobs. Like Vishal, many of them are yet to crack these exams.

"My father is a marginal farmer. How long can he support me financially?" asks a desperate Vishal, who belongs to a village in Vaishali district.

"It has become difficult for me to fulfill his dream that I would get a government job.

"There was a big hope for a railway job, but it was shattered because of the way the RRB came out with the results and issued a fresh notification for the exams.

"We cannot sit silent; we have to protest as unemployment is a major problem among the youth now.

"We are opposed to the decision by the railways to hold the exam in two stages."

The youth claim the second stage is unfair to those who have cleared the first exam. 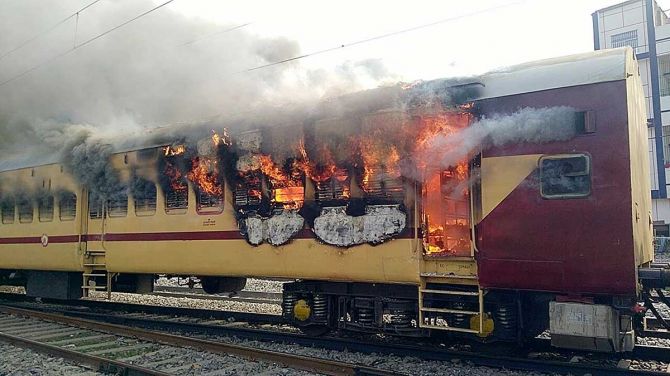 Ajit Kumar, another railway job aspirant who comes from Ara in Bhojpur, says, "We were hopeful about getting a railway job after waiting for nearly three years, but the RRB played its game and disappointed us.

"This (central) government has been trying to curtail jobs and has left jobless youths in the lurch.

"It has forgotten its promises to provide jobs. Joblessness has increased in recent years, particularly during the COVID-19 pandemic.

"Instead of speeding up the recruitment process, the RRB is trying to delay it further and reduce the number of jobs.

"The government only listens to those who stage protests, like the farmers did. It is our turn now.

"The only option available to us now is to protest against the unfair result and the delay in recruitment." 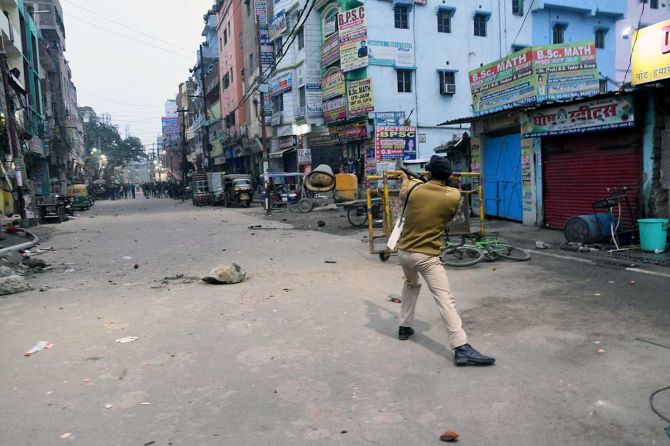 "The government is selling and privatising everything, including the railways. Job opportunities are ending.

"We want government jobs because there is no security in private jobs.

"Unlike the government, the private sector follows the hire-and-fire policy.

"It is our right to protest and draw the attention of this government, which is sleeping and appears blind, as it has failed to see the pain and struggle of the jobless youth."

The college student from Gaya adds, "The government was wrong to use police force to repress protesters and create fear among them.

"This protest symbolises the growing restlessness among the jobless youth.

"We will continue to fight for justice." 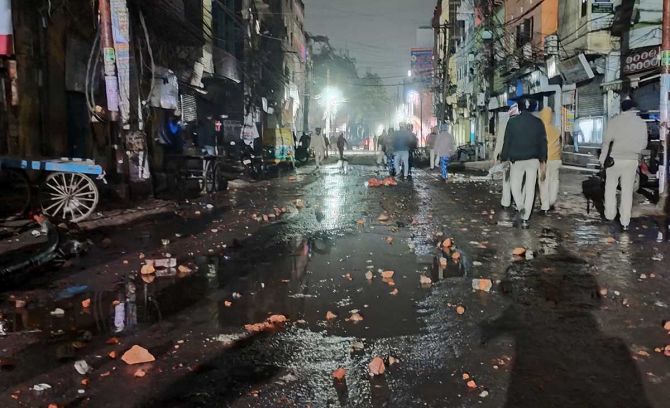 IMAGE: Police throw back the brickbats flung at them by agitating aspirants in Patna on January 25. Photograph: ANI Photo

In semi-feudal Bihar, a government job is a matter of prestige as it provides security and societal respect.

Besides, in the traditional marriage market, there is great demand for a groom with a government job; it fetches him a fat dowry as well.

It has been decades since Bihar has seen such widespread protests by jobless youth.

This protest against the central government began early this week as government job aspirants -- without the formal support of the Opposition political parties -- took to the streets.

As a result, train services were disrupted on the Gaya-Kiul rail line on January 27.

In the past, Bihar has witnessed violent student protests in the mid-seventies. Again, in the nineties, the state was rocked by pro- and anti- Mandal Commission protests. 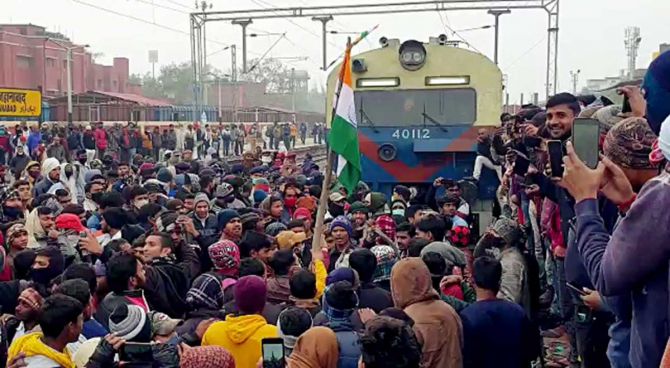 The protests have turned violent in several places during the last 100 hours.

The Bihar police, along with the Railway Police, have fired several rounds in the air, released tear gas shells and resorted to lathi charges at different places to disperse the youth. In the process, dozens of protesters were injured.

Some policemen were also injured due to stone-pelting by the protesters.

The protesting railway job aspirants -- supported by different student bodies that are allied to the state's Opposition parties -- are set to intensify their agitation.

Following a call from Communist Party of India (Marxist-Leninist) legislator Manoj Manjil for a Bihar bandh on January 28 -- his call has received support from the student bodies of the Left parties -- students have been blocking roads and burning tyres in the state today.

The Opposition Mahagathbandhan -- including the Rashtriya Janata Dal, the Congress and the Left parties -- held a meeting in Patna on Thursday afternoon to discuss the police action against the protesting railway job aspirants.

The state government has also registered FIRs against half a dozen coaching teachers including 'Khan Sir', a popular YouTuber, on charges of instigating railway job aspirants to protest.

'Khan Sir' -- who refuses to reveal his name -- is a Patna-based teacher who runs the Khan GS Research Centre and offers online classes. His unique teaching style has a huge following among those who are preparing for competitive exams. 'Khan Sir' urged the students not to participate in the bandh.

Jitan Ram Manjhi, Bihar's former chief minister and president of the Hindustani Awam Morcha, an ally of the BJP, has opposed the FIR against 'Khan Sir' and warned that arresting him would be a huge mistake.

Senior RJD leader Shivanand Tiwari has also criticised the government for registering an FIR against coaching teachers like 'Khan Sir'.

As per reports, until January 27, eight protesters -- including four in Ara and four in Nawada -- were arrested and jailed.

According to state police officials, railway property has been damaged in Gaya, Jehanabad, Bhagalpur, Sasaram, Samastipur and Chhapra.

Amid Republic Day celebrations on January 26, thousands of jobless youth, a few of them carrying the national flag, blocked railway tracks in Jehanabad, Ara, Gaya and Samastipur. As a result, trains services were disrupted for hours.

As the number of protestors increased, the police appealed to them to stop blocking the railway tracks and vacate the railway platform. The angry protestors refused.

The police then fired tear gas shells and resorted to a lathi charge. This agitated the protesters even more; they pelted stones at the police and set fire to a compartment of an empty express train.

In the evening, the protesters again set fire to two more compartments of another train at Gaya.

Gaya's Senior Superintendent of Police Aditya Kumar says the protesting railway job aspirants have been misled and are being instigated by vested interests, which is why they have targeted the railways.

"Three bogies of two trains were damaged after a group of protesters set it on fire.

"The police will identify culprits and act against them," he promises.

Meanwhile, hundreds of protesters blocked the railway tracks at Jehanabad railway station on January 26, disrupting train services on the Gaya-Patna route for hours.

They also burned effigies of Prime Minister Narendra Damodardas Modi and Railway Minister Ashwini Vaishnaw on the railway track itself.

The protests began on January 24 at the Rajendra Nagar Terminal in Patna and the Ara railway station in Bhojpur.

Initially a small gathering of railway job aspirants, their numbers soon grew word spread and many jobless youths joined them at both places.

Rajendra Nagar Terminal was virtually under siege by angry protesters and train movement was disrupted for more than nine hours.

The protests spread to nearly a dozen districts across the state on January 25-26.

"Some angry protesters set the bogie of a train near the outer signal of the railway station on fire," says Patna Rail Superintendent of Police Pramod Kumar Mandal.

In Nawada, railway job aspirants initially took to the streets on January 25.

After a group of protesters set ablaze a railway track maintenance engine, ransacked the railway station premises and uprooted railway tracks, the police resorted to a lathi charge.

In Sitamarhi too, protesters blocked railway tracks and clashed with the police, who fired into the air to disperse them.

The protestors blocked roads as well.

In Patna, on January 25, hundreds of jobless youths protested near the Saidpur-Bhikhna Pahari localities, which is where most of the students preparing for competitive exams stay.

When the police tried to disperse them, they pelted stones at them. A lathi charge ensued and the police fired tear gas shells as well.

Later in the night, the district administration cut off the area's power supply and police conducted raids against the protestors.

Taking serious note of fast-spreading protests by railway job aspirants in the state, Additional Director General of Police Nirmal Kumar Azad says all railway district police have been alerted and directed to control the situation.

Senior Railway officer Rajesh Kumar says train services were badly hit by the ongoing protest and several trains had to be diverted to other routes or lay stranded for hours at different railway stations.

Activist Ranjeev said the spontaneous protest by thousands of jobless youth is against the BJP-led central government which has failed to deliver on its promise to provide jobs.

The protest this week was triggered by the RRB's fresh notification that it would conduct another exam for a job after the result for the same job was declared recently.

This notice angered those who had appeared for the RRB's Non-Technical Popular Categories exam 2021; they accused RRB of cheating by holding two exams. These aspirants had applied for the job after the RRB notification issued in 2019. 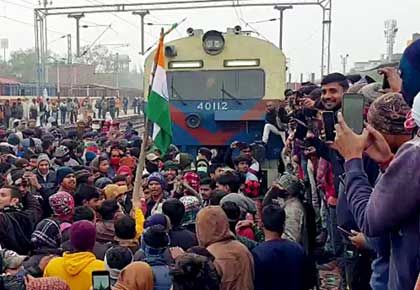 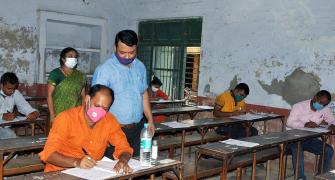 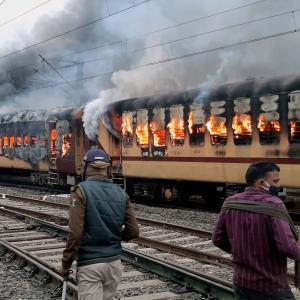