Fearing imminent arrest and likely reprisals from the CRPF -- 25 of whose jawans were gunned down by the Maoists inside a jungle just 200 to 300 metres away from their homes on the afternoon of April 24 -- young Adivasi men and women in Burkapal abandoned their homes and fled into the jungle.
Rediff.com's Prasanna D Zore and Uttam Ghosh report from the ghost village.
Photographs: Uttam Ghosh 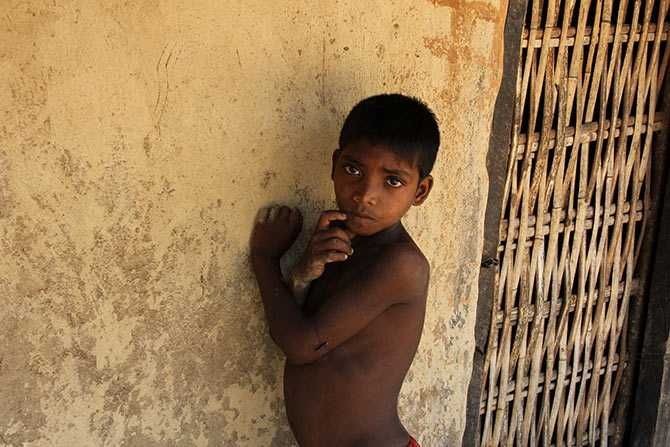 INMAGE: Standing forlornly in front of his locked house in Burkapal, this boy's eyes betrayed trauma.
He kept staring blankly at us.
Perhaps, he was asking: 'Like the CRPF jawans, don't children like us too need counselling for the horrors we witness in conflict zones?'
'Don't the Adivasis here suffer from malaria?'
'Don't Adivasis too pine for their family members who flee into the jungle abandoning their young ones?'
Unfortunately, he could not speak to us; neither could we because of the languages we spoke.
The interpreter with us did try to speak with the villagers about their issues, their fears, their concerns, but the women just kept saying "They (those young and able in the village) ran into the forest."

Old men rested under the shade of their neatly done, clean verandahs.

Women were busy peeling raw mangoes or tending to mahua fruit spread on the ground to dry in front of their houses.

Most homes had their doors ajar; some were carefully locked.

The entire village -- roughly about 40, 50 homes and a population of not more than 400 Adivasis (as per the Central Reserve Police Force estimate) -- separated by a wide, under-construction road with the spot where the ambush took place, wore a deserted, haunted look.

Children, some of them showing signs of malnutrition and mental trauma, seemed oblivious to the absence of their fathers or the goings-on around them. 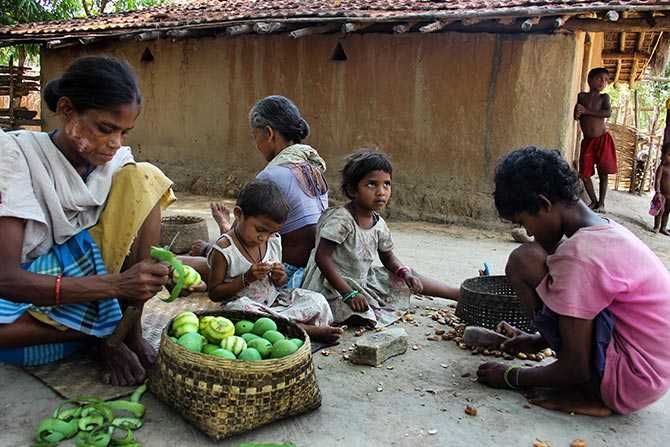 IMAGE: Most women who stayed behind were busy peeling raw mangoes, breaking seeds that they had collected from the forests or tending to mahua fruits spread on the ground for drying.
Small children helped their mothers with whatever they could.

While the CRPF strongly believes the villagers were hand-in-glove with the marauding Maoists, the Adivasis, feel the locals, always get trapped in the battle of supremacy between the security forces and the Maoists.

"Just a few weeks ago, the Burkapal villagers shared friendly relations with the CRPF," says Durga Pal, a local activist from Dornapal, who often visits the villagers.

She requested her location and name be changed; she expects trouble from the CRPF if her identity is revealed.

The Burkapal villagers, she sees, were seen as close to the CRPF, sharing information about the Maoists with the paramilitary forces.

"Madvi Dula, a former sarpanch of Burkapal, was picked up and killed by the Maoists on March 9 because they suspected him to be a CRPF informer," she says.

"His body was thrown closer to our camp near that village," a CRPF officer from a village where Dula's body was located had told us about it.

"And now the CRPF thinks the villagers were involved in the April 24 massacre," says Durga, explaining why the men and women from the village had abandoned their homes. 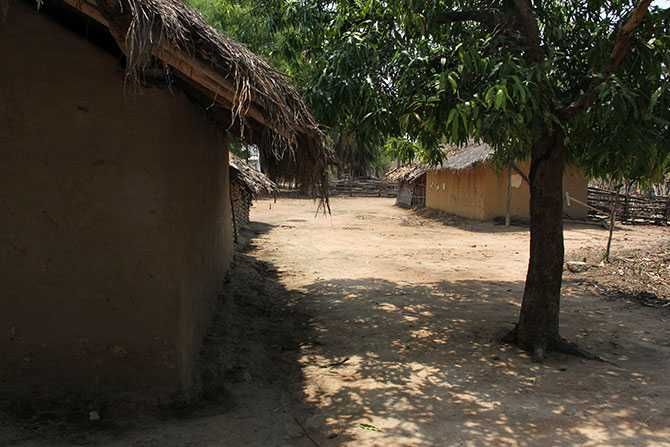 IMAGE: Swachcha Bharat: The Adivasis take great care to keep their surroundings neat and clean.
Overlooking a decent porch, most Adivasi homes in Burkapal were built close to mango trees.

Ask the women who had stayed behind in the village knowing well that the CRPF would come looking for their menfolk, and women too, about why the village was deserted, and they keep repeating themselves.

"They ran away after the incident (the Burkapal killing of April 24, where 25 CRPF jawans were killed)," woman after woman said.

They say nothing when asked how often the CRPF visited their village in search of their men and women after the April 24 ambush.

"Nobody trusts anybody in such times," Durga says, when told about the silence of the villagers in Burkapal.

"The CRPF and local police harasses them no end after such attacks," she says.

A CRPF officer along the Dornapal-Jagargonda stretch echoes Durga, but in another context. "We give them utensils, food, water, clothes and what they do is stab us in the back."

"It is wrong to say that the Adivasis did not help the CRPF," asserts Dr Varnika Sharma, a military psychologist and researcher with the Indian Council of Social Science Research, ICSSR.

The CRPF's civic action programme in Burkapal, she says, did help the force engage with the villagers.

"But when Naxals killed their village (former) sarpanch just a month ago, that sent a strong message to the villagers that the Naxals can kill anybody, any time and did not fear the CRPF. That took them (the villagers) away from the CRPF," Dr Sharma says. 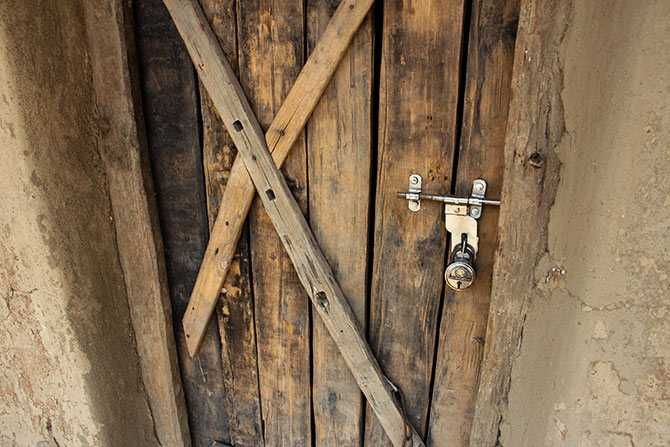 IMAGE: While we saw women and children and old men outside some homes, many of them, like this one, were locked.

As part of the CRPF's civic action programme, that the force runs for the welfare of the villagers, the CRPF's Burkapal camp was entrusted with the task of befriending the villagers of Burkapal, and several other villages under their jurisdiction, to engage them in a development dialogue.

"The villagers were a regular at the camp with many small children often visiting these camps for food," says a CRPF jawan, adding bitterly, "But now they have done this to our jawans."

Immediately after the April 24 ambush, the CRPF rounded up several villagers and charged them with being Maoists or abetting the extremists.

"It was this fear that drove the villagers away into the jungle," says Durga.

"Do you think without the information provided by the villagers about our movements the Maoists would have known where to lay the ambush?" fumes one CRPF officer while linking the involvement of the Burkapal villagers in the ambush.

The distrust is deep and complete, and when this happens sanity and common sense takes a back seat, Durga points out.

"Why would the Burkapal villagers help the Maoists in the killing of CRPF jawans bang opposite their own village? Wouldn't they know that if such a thing were to happen, the first target of the CRPF would, obviously, be their village? Why would they dig their own grave?" she asks.

According to Durga, neither the Maoists nor the CRPF have any concern for the Adivasis who get sandwiched in their battle to capture people's hearts and lands.

To prove that Maoists too consider the Adivasis as cannon fodder, she runs the same argument.

"If the Maoists were to really care for the Adivasis, who they call their very own, why would they pick the spot so close to a village, any village? Don't they realise that their acts of violence put the lives of their own in jeopardy?"

"The Maoists are hypocrites too," she says. 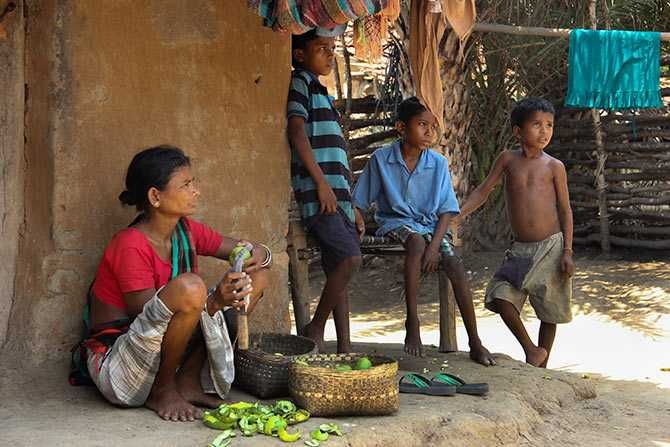 IMAGE: Most children looked forlorn and weak; victims of a conflict that they don't deserve; a conflict not of their making; a conflict that will shape their future soon.
Their parents may or may not support the Maoists, but the CRPF seems to have drawn the line: "If they did not help the Maoists, then why did they flee the same day? Chor ki dadhi main tinka," says one CRPF officer.
"Had they stayed back, they would have either been slapped with false cases or killed in a fake encounter," counters Durga.
Yet another case of being trapped in a vicious circle.

Adivasis, across Bastar's Maoist-affected areas, are trapped in a vicious circle.

Faced with a gun, they are left with no choice. It is only the fear of the gun that they heed.

"The Maoists kill them if they side with the CRPF and the latter stage fake encounters against those supporting the Maoists," Durga says.

Durga knows that life inside the forests will not change any time soon. She believes the battle between the CRPF and the Maoists is in for a long haul. 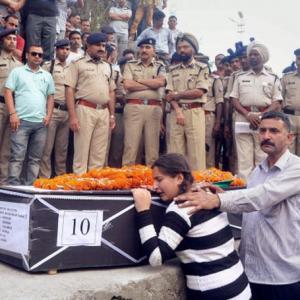 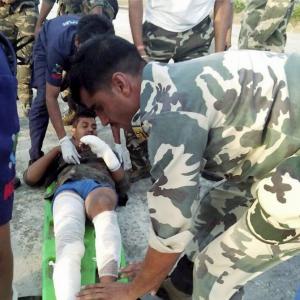